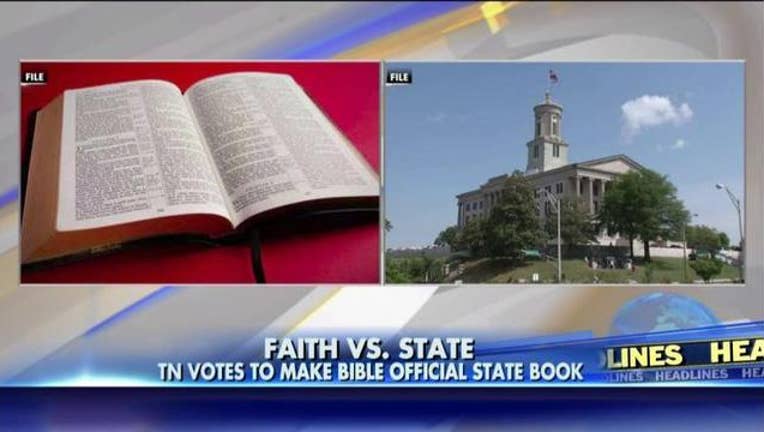 The state Senate voted 19-8 in favor of the bill despite arguments by the state attorney general that the measure conflicts with a provision in the Tennessee Constitution stating that "no preference shall ever be given, by law, to any religious establishment or mode of worship."

Opponents argued the Bible would be trivialized by being placed alongside other state symbols such as the official tree, flower, rock or amphibian. But both chambers of the Legislature brushed aside those concerns to send the bill to the desk of Republican Gov. Bill Haslam. He opposes the measure but hasn't said whether he'll issue a veto.

Republican Sen. Steve Southerland argued that his bill is aimed at recognizing the Bible for its historical and cultural contributions to the state, rather than as government endorsement of religion.

Democratic Sen. Jeff Yarbro questioned why the legislation highlights the economic impact of Bible publishing in the state, or that Bibles were traditionally used to track family histories.

The Bible bill came to a vote just days before the candidate filing deadline, giving lawmakers pause about being portrayed by political rivals as being as opposed to the Bible if they voted against the bill.

Earlier this session, the Legislature approved a resolution to add the .50-caliber Barrett sniper rifle the state's official symbols. The Murfreesboro-based company run by a prominent Republican supporter, Ronnie Barrett, supplies its firearms to law enforcement agencies, private citizens and more than 70 militaries around the world.

Hedy Weinberg, the executive director of the ACLU of Tennessee, called on Haslam to veto the Bible bill. She called it a "thinly veiled effort to promote one religion over other religions clearly violates both the United States and Tennessee Constitutions."

Southerland said that an outside legal organization has offered to defend any lawsuits challenging the bill for free.