Timeline of the riot at the US Capitol on Jan. 6

What started as a congressional and democratic exercise in the peaceful transfer of power, devolved into death, destruction and chaos.

NASHVILLE, Tenn. (AP) - Federal prosecutors said a Tennessee man who carried flexible plastic handcuffs around the U.S. Capitol during the recent raid by Trump supporters is a danger to his community and a serious flight risk, and are asking that he be detained until trial.

In a court filing ahead of a Friday detention hearing in Nashville, prosecutors described a Jan. 10 search of Eric Munchel's home that turned up assault rifles, a sniper rifle with a tripod, shotguns, pistols, hundreds of rounds of ammunition and a drum-style magazine. Prosecutors also said they have reason to believe Munchel may have had weapons with him in Washington that he stashed Jan. 6 outside the Capitol before entering.

Munchel is charged with violent entry and disorderly conduct on the Capitol grounds, conspiracy and civil disorder. He faces up to 20 years if convicted. An attorney for Munchel did not immediately return phone and email messages Thursday.

In the memorandum in support of detention, prosecutors said Munchel traveled to Washington with his mother, Lisa Eisenhart, who has also been charged in the Capitol riot and has a detention hearing set for July. The two participated in Donald Trump's "Stop the Steal" rally in which the former president repeated his baseless claims of election fraud and exhorted the crowd to march to the Capitol and "fight like hell."

Munchel "perceived himself to be a revolutionary, in the mold of those who overthrew the British government in the American Revolution," according to court filings. He was "dressed for combat" with "combat boots, military fatigues, a tactical vest, gloves, and a gaiter that covered all of his face except for his eyes," documents state. He also wore a stun gun on his hip and mounted a cellphone to his chest to record events. 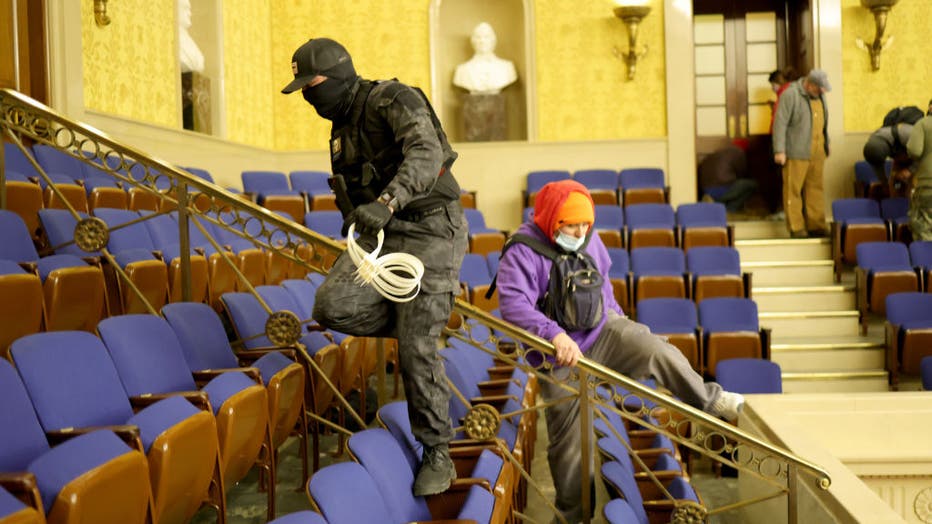 Investigators later recovered the cellphone from a friend who had been given it by Munchel, according to court documents. In cellphone video, Munchel recorded himself speaking to Eisenhart about not entering the Capitol with weapons.

According to the memorandum, Munchel says he needs to "'take my weapons off before I go in there.'" Then Munchel and Eisenhart walk to a location where "a tactical bag and other items appear to have been stashed," take off items and deposit them in or near the bag.

Later, while walking through the Capitol, Munchel spots plastic handcuffs and says, "'Zipties. I need to get me some of them,'" according to the court document. Handcuffs were among the items found when investigators later searched Munchel's home.

Federal prosecutors argue in the memorandum that Munchel's offenses are serious and he should be detained pending trial to "ensure the safety of the community." He has "made statements evincing an intent to engage in violent conduct because of his disillusionment with the outcome of the 2020 Presidential election," the document states. It also notes that the riot at the Capitol resulted in five deaths.