Texas school shooting: Onlookers urged officers to charge school while gunman was inside

Days after a Texas school shooting left 19 children and two teachers dead, witnesses are sharing details about the frustrating moments they arrived at Robb Elementary school in Uvalde after learning of an active shooter situation. Onlookers say they urged responding officers to charge the school as the 18-year-old gunman was inside killing people in one classroom. The massacre lasted about 40 minutes before the shooter was killed.

Still, "they were unprepared," said parents who waited outside the school for at least 40 minutes while Salvador Ramos killed 19 elementary school students and two teachers in the deadliest school shooting in Texas history.

The school district, which serves a community of about 16,000 residents, has its own four-person police department: a chief, a detective and two officers. Secondary campuses have security staff.

Despite the security measures in place, Ramos was able to get into the school through an unlocked door and into a classroom full of children and their teachers.

"More could have been done," said Javier Cazares, whose fourth grade daughter, Jacklyn Cazares, was killed in the attack.

What other security measures does the Uvalde School District use? 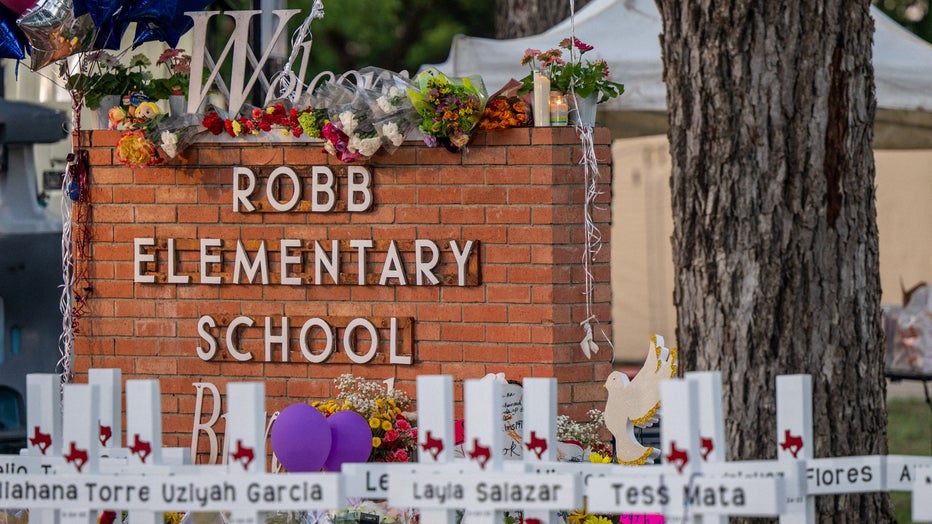 According to the Uvalde school district’s website, these are the security measures in place:

During the siege, which ended when a Border Patrol team burst in and shot Ramos to death, frustrated onlookers urged police officers to charge into the school, according to witnesses.

Cazares said he raced to the school when he heard about the shooting, arriving while police were still gathered outside the building. Upset that police were not moving in, he raised the idea of charging into the school with several other bystanders.

UVALDE, TEXAS - MAY 25: Community members embrace and mourn together at a vigil for the 21 victims in the mass shooting at Rob Elementary School on May 25, 2022 in Uvalde, Texas.  (Photo by Brandon Bell/Getty Images)

"Let’s just rush in because the cops aren’t doing anything like they are supposed to," he said. "More could have been done. They were unprepared."

Initial reports said there was an armed school officer at Robb Elementary the day of the massacre, but officials said that's not true. He was driving nearby when the attack began, a law enforcement source told The Associated Press.

RELATED: Uvalde, Texas native Matthew McConaughey on mass shooting: "This is an epidemic we can control"

Department of Public Safety Director Steve McCraw told reporters that 40 minutes to an hour elapsed from when Ramos opened fire on the school security officer to when the tactical team shot him, though a department spokesman said later that they could not give a solid estimate of how long the gunman was in the school or when he was killed.

"The bottom line is law enforcement was there," McCraw said. "They did engage immediately. They did contain (Ramos) in the classroom."