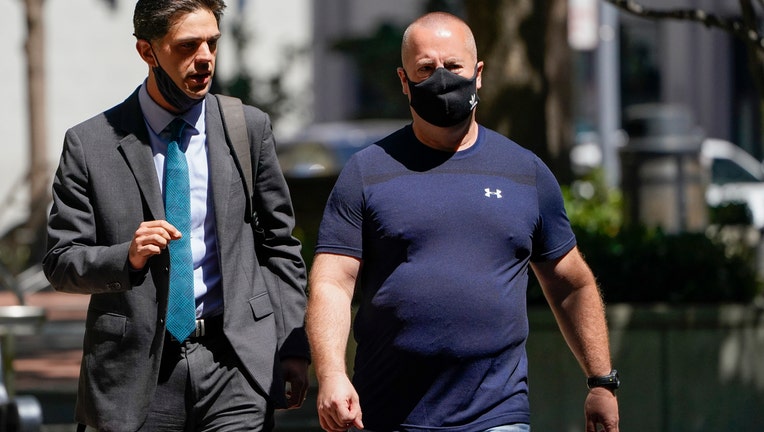 OAKLAND, Calif. - A federal judge on Wednesday sentenced a former Dublin prison chaplain to seven years behind bars, calling his crimes "unspeakable" and dismissing his defense team's pleas to be lenient because he suffered PTSD as an Army veteran who suffered from "impulse control."

"This is rape," U.S. District Court Judge Haywood S. Gilliam Jr. told James Theodore Highhouse, 50, who wore jeans, Nike sneakers and an Under Armour T-shirt to his sentencing hearing in Oakland. "This was sustained predatory behavior against traumatized and defenseless women in prison."

Gilliam added: "There is a culture of rot at Dublin. It's important the world see this egregious conduct and see  this serious penalty."

Highhouse stood with his hands folded at his waist, head down, most of the hearing. He was ordered to surrender on Nov. 2. He now lives in Oregon. When he is released, he must also register as a sex offender.

Before the judge decided his sentence, Highhouse spoke publicly for the first time since being charged with abusing his power as a chaplain at FCI Dublin, coercing women to have sex with him as they sought out his spiritual guidance.

"I ask for forgiveness," Highhouse said. "I want to express apology and regret to the victim and to the court."

Highhouse had no supporters who attended the hearing. His defense attorneys, Jaime Dorenbaum and Evan Haming, declined to speak after court.

U.S. Department of Justice Special Litigation Counsel Fara Gold had sought a 10-year sentence, pointing out that his crimes were much more serious than the legal punishment allows. She dismissed the fact that he was deployed to Afghanistan and Iraq, suffered from depression and PTSD and was labeled clinically "disabled" as a result by Veteran's Affairs.

A federal judge on Wednesday sentenced James Highhouse, a former Dublin prison chaplain, to seven years behind bars, calling his crimes "unspeakable" and dismissing his defense team's pleas to be lenient because he suffered PTSD as an Army veteran who suffered from "impulse control."

Highhouse's attorney asked that the judge to sentence him to two years in prison.

Highhouse had formally been charged with having sex with one woman, but prosecutors say he engaged in predatory conduct with at least six women from 2014 to 2019. He pleaded guilty on Feb. 23 to two counts of sexual abuse of a ward, two counts of abusive sexual contact and one count of making false statements to federal agents.

Likana, the woman at the center of his guilty plea, has since been deported to Thailand, Gold said in court.

In their victim impact statements, women described Highhouse dry humping them, offering his chaplain office as a sex den and telling them Bible stories to manipulate them into having sex. They often were called into his office to please him once a week.

Highhouse is the first of five officers at FCI Dublin to be sentenced in a sex scandal that has received national attention.

Enrique Chavez, a food service foreman, is expected to plead guilty on Sept. 14. Ross Klinger, a recycling technician, pleaded guilty in February but has yet to be sentenced.

MORE:  Dublin prison guard says she was forced out for reporting abuse

The former warden, Ray J. Garcia, was recently charged with abusing two additional inmates, for a total of seven counts involving three victims. He pleaded not guilty to the initial charges against him and is scheduled to go on trial in November.

Gilliam, the judge, also expressed frustration that the sentencing guidelines weren't punitive enough to relay the "unspeakably serious" nature of the sex crimes.

The seven-year sentence was more than double the recommended punishment in federal sentencing guidelines, which call for a sentence of less than three years. Probation officers had recommended seven years.

"It’s hard to come up with the right words to describe how egregious an abuse of these victims this was," Gilliam said. "I can't think of a case where I varied upward. But this is that case."

Lisa Fernandez is a reporter for KTVU. Email Lisa at lisa.fernandez@fox.com or call her at 510-874-0139. Or follow her on Twitter @ljfernandez