The New York and New Jersey region will likely see moderate rain through Wednesday, according to the National Weather Service. Rainy, breezy, and cool conditions are lingering from the Mid-Atlantic to southern New England.

"A stubborn upper-level low will remain entrenched over the Mid-Atlantic for at least another day, continuing the rainy, breezy, and cool conditions that have plagued the region since the weekend," the National Weather Service said. "Another 1-2 inches of rain are possible along and east of the I-95 corridor through the Mid-Atlantic and along the coast in southern New England. Fortunately, rainfall rates have been relatively low keeping the threat for any flash and urban flooding down. Breezy conditions will also continue, particularly along the coast, and coastal flooding will remain a concern."

Mike Woods has the weather forecast for the New York City area.

"Lingering coastal low pressure will continue to influence our weather until it pushes off to the east Wednesday," the National Weather Service office in Mount Holly, New Jersey, said. "High pressure builds for Thursday before a cold front crosses the area Friday. More high pressure with cool temperatures arrive for the weekend."

The New York City area will have cloudy skies and periods of showers throughout the day, with temperatures in the upper 40s to mid 50s, according to the National Weather Service office in Upton, New York. Northeast winds of 10-20 mph with gusts reaching 25-35 mph are expected. The strongest winds will be near the coast. 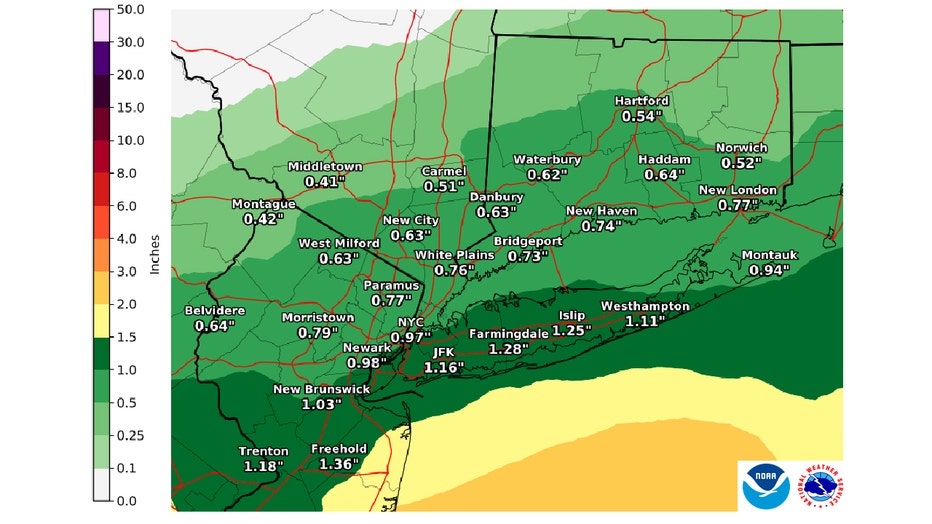