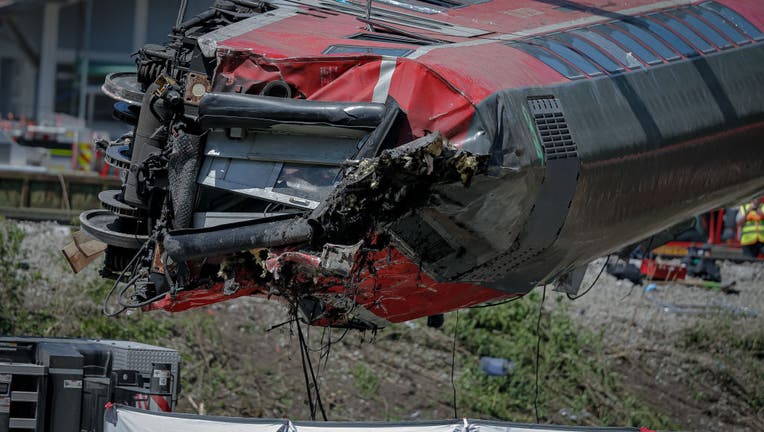 GARMISCH-PARTENKIRCHEN, GERMANY - JUNE 04: A derailed train is being lifted from the tracks on June 4, 2022 near Garmisch-Partenkirchen, Germany. Rescuers are still looking for missing passengers following yesterday's accident that left at least four

FRANKFURT, Germany (AP) - Police said Saturday the body of a fifth victim has been found beneath a train that derailed Friday in the Alps in southern Germany.

The man’s body was uncovered after initial attempts to lift the derailed carriages failed. Recovery workers had to wait for a heavy crane to be brought to the site near the resort town of Garmisch-Partenkirchen.

The cause of the derailment was under investigation.

About 140 people were on the train at the time, including students headed home from school for the Whitsun holiday. Police for the southern Bavaria region said 44 people were injured.

The regional train headed for Munich went off the tracks after noon Friday in Burgrain after pulling out of the resort town from where it had set off. Three of the double-deck carriages overturned at least partly and people were pulled out of the windows to safety.