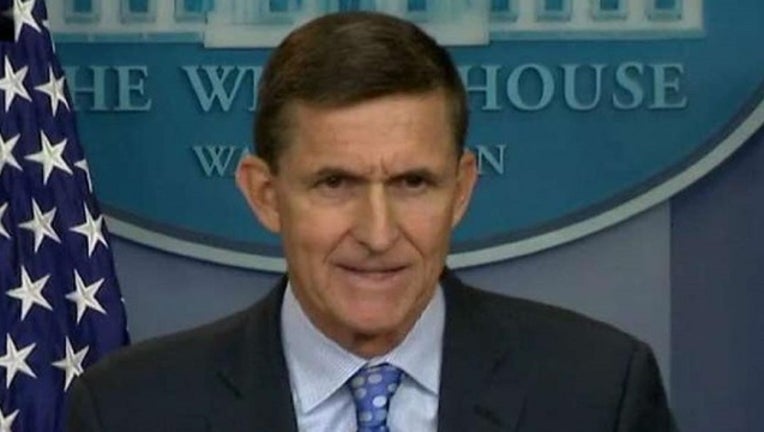 WASHINGTON (AP) - Even though he named Michael Flynn to be his top national security aide, President Donald Trump on Friday laid the blame for any flaws in Flynn's vetting at the feet of his predecessor.

In an interview airing Friday evening on Fox News Channel's "The First 100 Days," Trump tried to deflect recent criticism of his decision to appoint Flynn as national security adviser despite Flynn's past lobbying on behalf of Turkish government interests and his acceptance of tens of thousands of dollars from a Russian state-sponsored television network.

"When they say we didn't vet, well Obama I guess didn't vet, because he was approved at the highest level of security by the Obama administration," Trump said, referring to the previous administration's approval of Flynn's security clearance.

"So when he came into our administration, for a short period of time, he came in, he was already approved by the Obama administration and he had years left on that approval," Trump added.

Though Flynn was indeed with the Trump administration for a short period before he was forced out, he campaigned vigorously for Trump for months during the 2016 election battle, including a fiery speech at the Republican National Convention in which he joined in as the crowd jeered Democrat Hillary Clinton. "Lock her up, that's right," he called out, applauding the delegates' chants.

President Barack Obama fired Flynn from his post as director of the Defense Intelligence Agency in 2014, but Flynn maintained a security clearance that was reissued in January 2016. Trump appointed Flynn as national security adviser in January. He forced him to step down in February, saying Flynn had misled senior administration officials, including the vice president, about his contacts with Russian officials.

Trump's comments echoed the defense advanced by his press secretary Sean Spicer on Thursday, as the Pentagon's watchdog confirmed it was investigating Flynn, a retired U.S. Army lieutenant general, over whether he failed to get U.S. government approval to receive foreign payments.

Among those payments was more than $33,000 from the RT television network, which U.S. intelligence officials have branded as propaganda front for Russia's government. The network paid Flynn for attending a gala in Moscow. At the event, Flynn was seated next to Russian President Vladimir Putin.

Earlier this week, the top Republican and Democrat on a House oversight committee said they believe Flynn broke federal law by failing to get permission to accept foreign payments and failing to disclose the payments after he received them.

Flynn attorney Robert Kelner has defended his client by saying that Flynn did disclose the Moscow trip itself in briefings with the DIA, which is a component of the Defense Department. Kelner said those briefings occurred before Flynn left on the trip and after he returned, citing them as evidence that Flynn was forthcoming.

Even though he may have disclosed the trip, both the House committee and the U.S. Army have said they have found no evidence that he disclosed the payments or receive permission to accept them.

In addition to the committee, the Defense Department's inspector general and the Army are scrutinizing the Russia-linked payments as well as Flynn's share of more than $530,000 worth of foreign agent work he did for a Turkish businessman. Flynn acknowledged in a filing with the Justice Department last month that his work investigating a Turkish cleric could have principally benefited Turkey's government.

On Friday, the ranking Democrat on the House Committee on Oversight and Government Reform faulted the Trump administration for blaming Obama.

"The White House had its own responsibility to fully vet General Flynn since new information became public during the transition - well after General Flynn's last background check - about his lobbying on behalf of foreign interests," said Rep. Elijah Cummings, D-Md. "The White House needs to stop making excuses to protect General Flynn."

In addition to the scrutiny of his foreign payments, Flynn's foreign contacts are being examined as part of the wider inquiries into Russian meddling in the 2016 presidential campaign. He has been interviewed by the FBI, which is investigating Trump associates' contacts with Russia, and he is being probed by the House and Senate intelligence committees.