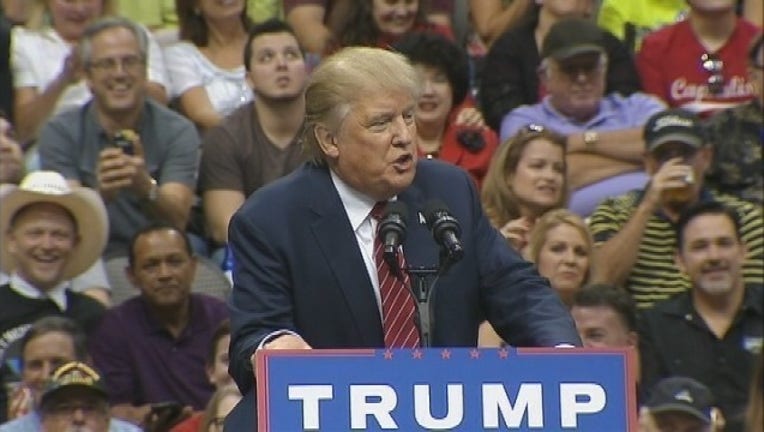 Trump, who has a history of making controversial remarks about immigrants and other groups, was kicking off a town hall event Thursday evening in Rochester, New Hampshire — his first since Wednesday's second Republican primary debate.

"We have a problem in this country. It's called Muslims," said the first man Trump called on to ask a question. "We know our current president is one. You know he's not even an American."

Trump, who was a driver of the "birther" movement that claimed Obama wasn't born in the U.S, first responded with feigned exasperation — "We need the question," he said, to laughs — but let the man continued.

"We have training camps growing where they want to kill us. That's my question," the man in the audience continued. "When can we get rid of it?"

Trump did not dispute the man's assertions and said he'd heard others raise the issue.

"Donald Trump not denouncing false statements about POTUS (president of the United States) & hateful rhetoric about Muslims is disturbing, & just plain wrong. Cut it out," she tweeted.

Trump rival Chris Christie, asked about the incident in a morning television interview, said that "if somebody at one of my town meetings said something like that, I would correct him." But Christie, appearing Friday on NBC's "Today" show, also said it is up to Trump to decide how to handle such situations, saying, "I'm not going to lecture him about what to do."

Trump's campaign released a statement that focused on the treatment of Christians in the country.

"The media wants to make this issue about Obama. The bigger issue is that Obama is waging a war against Christians in this country," it read. "Christians need support in this country. Their religious liberty is at stake."

The incident evoked a moment during the 2008 campaign when Republican nominee John McCain took the microphone away from a woman who said she didn't trust Obama because he was an "Arab."

Trump's questions about the president's country of birth helped build his stature among some conservative voters and pushed Obama to release a copy of his birth certificate in 2011. But Trump has distanced himself from the issue during his current run.

Trump's town hall, in a sweaty auditorium in Rochester, was also interrupted several times by a protester whose outbursts were met by hostility from the friendly crowd.