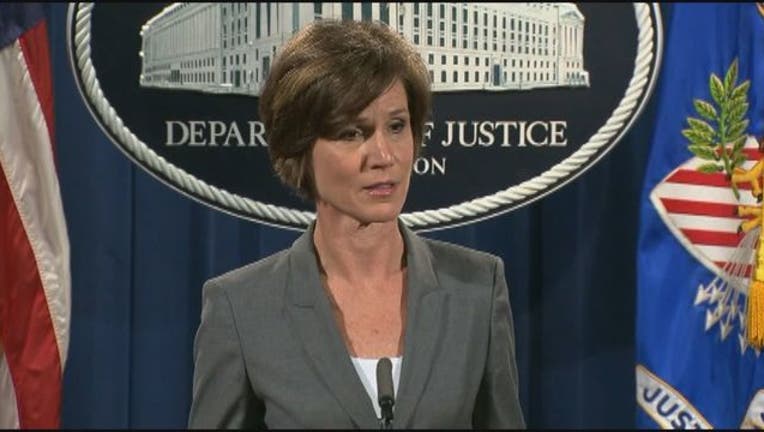 WASHINGTON (AP) - Accusing her of betrayal and insubordination, President Donald Trump on Monday fired Sally Yates, the acting attorney general of the United States and a Democratic appointee, after she publicly questioned the constitutionality of his controversial refugee and immigration ban and refused to defend it in court.

The firing came hours after Yates directed Justice Department attorneys not to defend the executive order, saying she was not convinced it was lawful or consistent with the agency's obligation "to stand for what is right." Trump soon followed with a statement accusing Yates of having "betrayed the Department of Justice by refusing to enforce a legal order designed to protect the citizens of the United States."

He immediately named longtime federal prosecutor Dana Boente, the U.S. Attorney for the Eastern District of Virginia, as Yates' replacement.

Boente was sworn in privately late Monday, the White House said. He promptly order Justice Department lawyers to "do our sworn duty and to defend the lawful orders of our President."

Boente said Trump's executive order was "both lawful on its face and properly drafted."

Yates' refusal to defend the executive order was largely symbolic given that Sen. Jeff Sessions, Trump's pick for attorney general, will almost certainly defend the policy once he's sworn in. He's expected to be confirmed Tuesday by the Senate Judiciary Committee and could be approved within days by the full Senate.

The chain of events bore echoes of the Nixon-era "Saturday Night Massacre," when the attorney general and deputy attorney general resigned rather than follow an order to fire a special prosecutor investigating the Watergate scandal. The prosecutor, Archibald Cox, was fired by the solicitor general.

Yates's abrupt decision reflected the growing conflict over the executive order, with administration officials moving Monday to distance themselves from the policy. As protests erupted at airports over the weekend and confusion disrupted travel around the globe, even some of Trump's top advisers and fellow Republicans made clear they were not involved in crafting the policy or consulted on its implementation.

At least three top national security officials -- Defense Secretary Jim Mattis, Homeland Security Secretary John Kelly and Rex Tillerson, who is awaiting confirmation to lead the State Department -- have told associates they were not aware of details of the directive until around the time Trump signed it. Leading intelligence officials were also left largely in the dark, according to U.S. officials.

Tennessee Sen. Bob Corker, the top Republican on the Senate Foreign Relations committee, said that despite White House assurances that congressional leaders were consulted, he learned about the order in the media.

Yates, who was appointed deputy attorney general in 2015 and was the No. 2 Justice Department official under Loretta Lynch, declared Monday she was instructing department lawyers not to defend the order in court.

"I am responsible for ensuring that the positions we take in court remain consistent with this institution's solemn obligation to always seek justice and stand for what is right," Yates wrote in a letter announcing her position. "At present, I am not convinced that the defense of the Executive Order is consistent with these responsibilities nor am I convinced that the Executive Order is lawful."

Trump said the order had been "approved" by Justice Department lawyers. However, the department has said the Office of Legal Counsel review was limited to whether the order was properly drafted, but did not address broader policy questions.

Other parts of Trump's administration also voiced dissent Monday. A large group of American diplomats circulated a memo voicing their opposition to the order, which temporarily halted the entire U.S. refugee program and banned all entries from seven Muslim-majority nations for 90 days. White House spokesman Sean Spicer challenged those opposed to the measure to resign.

"They should either get with the program or they can go," Spicer said.

The blowback underscored Trump's tenuous relationship with his own national security advisers, many of whom he met for the first time during the transition.

Mattis, who stood next to Trump during Friday's signing ceremony, is said to be particularly incensed. A senior U.S. official said Mattis, along with Joint Chiefs Chairman Joseph Dunford, was aware of the general concept of Trump's order but not the details. Tillerson has told the president's political advisers that he was baffled over not being consulted on the substance of the order.

U.S. officials and others with knowledge of the Cabinet's thinking insisted on anonymity in order to disclose the officials' private views.

Despite his public defense of the policy, the president has privately acknowledged flaws in the rollout, according to a person with knowledge of his thinking. But he's also blamed the media -- his frequent target -- for what he believes are reports exaggerating the dissent and the number of people actually affected.

After a chaotic weekend during which some U.S. legal permanent residents were detained at airports, some agencies were moving swiftly to try to clean up after the White House.

Homeland Security, the agency tasked with implementing much of the refugee ban, clarified that customs and border agents should allow legal residents to enter the country. The Pentagon was trying to exempt Iraqis who worked alongside the U.S. and coalition forces from the 90-day ban on entry from the predominantly Muslim countries.

"There are a number of people in Iraq who have worked for us in a partnership role, whether fighting alongside us or working as translators, often doing so at great peril to themselves," said Navy Capt. Jeff Davis, a Pentagon spokesman.

On Capitol Hill, lawmakers in Trump's party sought to distance themselves from the wide-ranging order.

While Spicer said "appropriate committees and leadership offices" on Capitol Hill were consulted, GOP lawmakers said their offices had no hand in drafting the order and no briefings from the White House on how it would work.

"I think they know that it could have been done in a better way," Corker said of the White House.

Acting Attorney General Sally Yates earlier Monday ordered Justice Department lawyers to stop defending the executive order, which temporarily suspends the U.S. refugee program and bars all immigration for citizens of seven majority-Muslim countries for 90 days. By Monday night, she was out.

"The acting Attorney General, Sally Yates, has betrayed the Department of Justice by refusing to enforce a legal order designed to protect the citizens of the United States," the White House press secretary's office said in a statement.

Trump named Dana Boente, U.S. Attorney for the Eastern District of Virginia, to serve in Yates' place until Sen. Jeff Sessions, his permanent pick for the position, is confirmed by the Senate.

The Yates decision came as Trump pressed into his second week in office defending his sweeping immigration ban. Protests persisted at major airports, and concern mounted from U.S. diplomats and members of his own party.

Trump denied that his order was to blame for weekend chaos at the nation's airports, instead pointing to computer glitches, demonstrations and even the "fake tears" of Senate Minority Leader Charles Schumer.

The president publicly shifted his focus, signing an executive action aimed at cutting regulations for small businesses and teasing his plans to unveil his Supreme Court pick Tuesday night.

But the immigration ban remained at the forefront of his first fortnight in the White House -- and officials were pondering more actions moving forward.

According to a draft document obtained by The Associated Press, Trump is considering an executive order that would target some immigrants for deportation if they become dependent on government assistance.

The draft order calls for the identification and removal "as expeditiously as possible" of any foreigner who takes certain kinds of public welfare benefits. Such immigrants have been barred from the U.S. for the better part of a century and they can already be deported. The proposed order appears to signal a Trump administration effort to crack down on such welfare cases.

Another draft order under consideration would make changes to several of the government's foreign worker visa programs. The White House did not immediately respond to requests for comments on the draft orders.

A spokesman for the former president said Monday that Obama "fundamentally disagrees" with discrimination that targets people based on their religion. Obama spokesman Kevin Lewis alluded to but did not specifically mention Trump's order but added that Obama was "heartened" by the civil engagement being seen across the country.

Obama has said he will give Trump room to govern but will speak out if his successor violates basic U.S. values.

White House press secretary Sean Spicer said Trump's order was "about the safety of America," while the new president played down its impact, saying on Twitter that just 109 people were detained and held for questioning. White House officials have said that was during the first 24 hours after the ban.

But nearly 400 legal permanent residents were delayed upon their arrival back in the United States between the time the travel ban was signed and Sunday evening, according to a federal law enforcement official. All of those people were ultimately allowed back into the country.

The official said one other green card holder is now facing deportation after an extra background check done after the executive order was signed revealed a criminal conviction. Details of that person's case were not immediately available.

The official spoke on the condition of anonymity because the person was not authorized to publicly disclose details of the travel ban's implementation.

Trump's order, which also halts all refugee admissions for 120 days, does not address homegrown extremists already in America. And the list of countries it applies to -- Iraq, Syria, Iran, Sudan, Libya, Somalia and Yemen -- doesn't include Saudi Arabia, where most of the Sept. 11 hijackers were from.

Growing numbers of Republican lawmakers expressed concerns about Trump's action. Sens. Marco Rubio of Florida and Tim Scott of South Carolina said in a joint statement that "the manner in which these measures were crafted and implemented have greatly contributed to the confusion, anxiety and uncertainty of the last few days."

Washington state's attorney general said he would sue Trump, making Washington the first state to announce a legal action against the administration. Democrat Bob Ferguson was one of 16 state attorneys general who released a statement Sunday calling Trump's action "un-American and unlawful."

A number of U.S. diplomats also prepared a memo criticizing the order. In a "dissent cable" being drafted for State Department leadership, the diplomats said the ban runs counter to American values and will fuel anti-American sentiment around the world.

The cable originated in the State Department's Consular Affairs bureau, which handles visas.

Unfazed, Spicer retorted that if "career bureaucrats" have a problem with the order, "they should either get with the program or they can go."

The president also mocked Schumer, the New York Democrat who grew emotional as he called the ban "un-American." Said Trump: "I'm going to ask him who was his acting coach."

Trump blamed an airline glitch for much of the disorder at the nation's international airports that dominated the weekend's news. Though a Delta systems outage Sunday night led to departure delays and cancellations of at least 150 flights, the chaos started the day before as protesters packed some of the country's major airports.