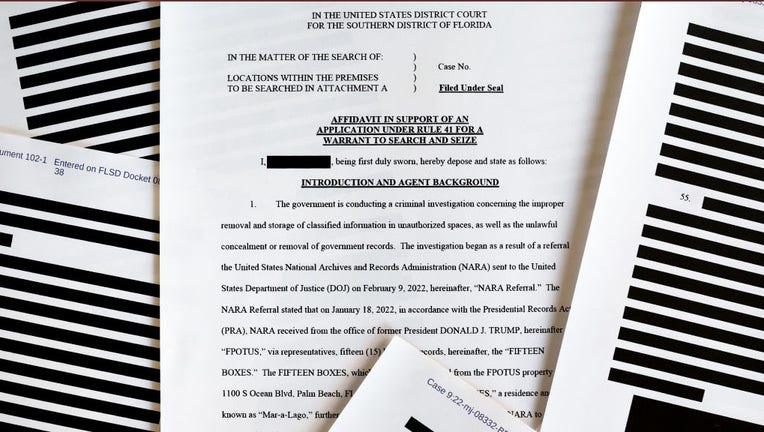 In this photo illustration, pages are viewed from the government’s released version of the F.B.I. search warrant affidavit for former President Donald Trump's Mar-a-Lago estate on August 27, 2022 in California. (Photo Illustration by Mario Tama/Getty

Donald Trump's legal team has told a newly appointed independent arbiter that it does not want to answer his questions about the declassification status of the documents seized last month from the former president's Florida home, saying that issue could be part of Trump's defense if he's indicted.

Lawyers for Trump and for the Justice Department are to appear in federal court in Brooklyn on Tuesday before a veteran judge named last week as special master to review the roughly 11,000 documents — including about 100 marked as classified — taken during the FBI's Aug. 8 search of Mar-a-Lago.

Ahead of the status conference, Raymond Dearie, the special master, requested the two sides to submit a proposed agenda and also provided a draft plan for how he envisions the process moving forward over the next two months.

Trump's lawyers signaled in a Monday evening letter their objection to several aspects of that draft plan, including a request from Dearie that they disclose to him and to the Justice Department information about the classification status of the seized documents.

The resistance to the judge's request was notable because it was the Trump team, not the Justice Department, that had requested the appointment of a special master to conduct an independent review of the documents so that any material covered by claims of legal privilege could be segregated from the investigation — and because the Trump team's recalcitrance included an acknowledgment that the probe could be building toward an indictment.

Trump has maintained without evidence that all of the records were declassified; his lawyers have not echoed that claim, though they have asserted that a president has absolute authority to declassify information.

In the letter, Trump's lawyers say the time for addressing that question would be if they file a motion seeking the return by the Justice Department of some of the property taken from Mar-a-Lago.

"Otherwise, the Special Master process will have forced the Plaintiff to fully and specifically disclose a defense to the merits of any subsequent indictment." the lawyers wrote.

The Trump team also asked the judge to consider pushing back all of the deadlines for his review.

Also Tuesday, Trump's lawyers were to respond to a Justice Department's appeal of a different judge's order barring the department at least temporarily from using the classified documents it seized as part of its criminal investigation. U.S. District Judge Aileen Cannon, in the same order appointing the special master, directed the department to halt its use of the records until Dearie can complete his work.