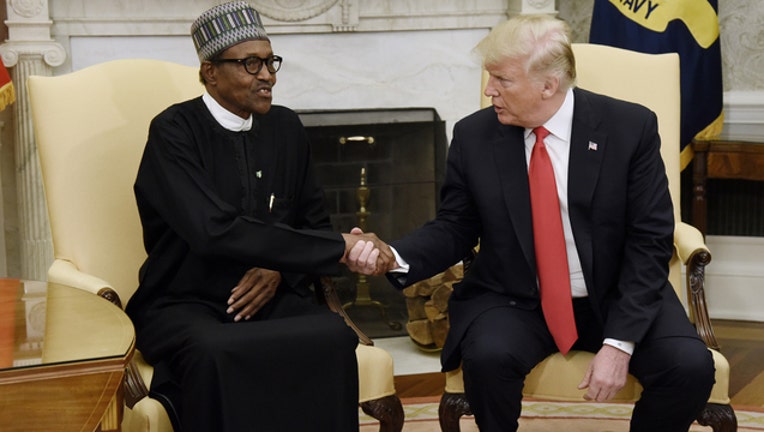 US President Donald Trump (R) meets with Nigerian President Muhammadu Buhari in the Oval Office of the White House on April 30, 2018 in Washington, DC. (Photo by Olivier Douliery-Pool/Getty Images)

WASHINGTON - President Donald Trump on Monday did not deny having used a vulgar term to describe countries in Africa earlier this year. He also did not apologize for the comment as he stood in the Rose Garden alongside Nigerian President Muhammadu Buhari, the first African leader to visit him at the White House.

In fact, Trump seemed to double down on his view that some countries in Africa are "very tough places to live in."

"We didn't discuss it," Trump said at a joint news conference in response to a question first put to Buhari. The Nigerian leader was asked whether he had talked to Trump about reports that the U.S. president used the word "shithole" to describe African countries in January.

Buhari skirted the issue, saying he was unsure about "the validity or whether that allegation against the president was true or not."

"So the best thing for me is to keep quiet," Buhari said.

In a meeting with a group of senators on Jan. 11, Trump questioned why the U.S. would accept more immigrants from Haiti and "shithole countries" in Africa as he rejected a bipartisan immigration deal, according to one participant and people briefed on the remarkable Oval Office conversation. He said he instead would prefer immigrants from countries like predominantly white Norway.

Trump later offered a partial denial in public but privately defended his remarks, The Associated Press reported in January. There was also internal debate in the West Wing over whether Trump said "shithole" or "shithouse," the AP reported.

At the news conference Monday, Trump told Buhari that "you do have some countries that are in very bad shape and very tough places to live in. But we didn't discuss it because the president knows me, and he knows where I'm coming from. And I appreciate that. We did not discuss it."

Buhari is the first African leader to come to the White House since Trump took office. Nigeria, Africa's most-populous country with nearly 200 million people, is the continent's largest economy and its leading crude oil exporter.

Trump said he urged Buhari to remove trade barriers in a move that will allow additional U.S. investment in the country. Trump said that the U.S. sends Nigeria more than $1 billion annually in foreign aid and that the U.S. ought to get something in return for its financial contribution.

"We will be investing substantially in Nigeria if they can create that level playing field that we have to, very much, ask for and maybe demand," Trump said.

Buhari did not directly respond to Trump's call for the removal of trade barriers.

Trump said during a joint appearance with Buhari in the Oval Office earlier Monday that terrorism was the other big issue on the agenda.

The extremist group Boko Haram launched a violent insurgency in northeast Nigeria nine years ago with the goal of creating an Islamic state. Tens of thousands of people have been killed while mass abductions of schoolgirls brought the group international notoriety. Trump called Boko Haram a "terrible problem" and said the Islamic State group has been "very much decimated."