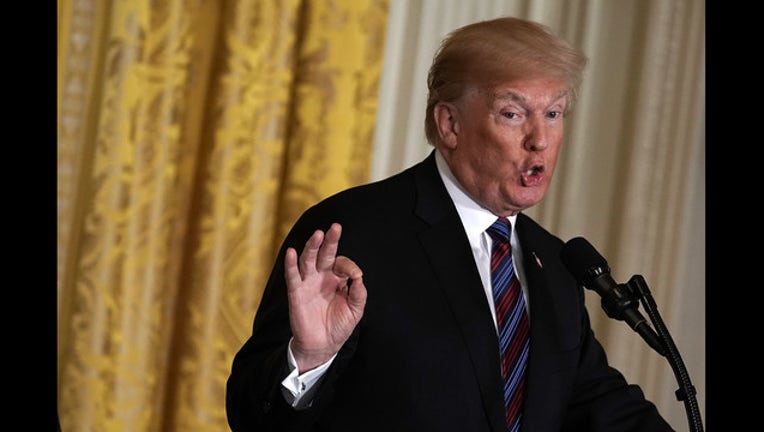 Trump was in West Virginia to showcase the benefits of Republican tax cuts, but he took a big and meandering detour to talk about his tough immigration and trade plans. He linked immigration with the rise of violent gangs like MS-13 and suggested anew that there had been widespread fraud in the 2016 election that cost him the popular vote.

"In many places, like California, the same person votes many times. You probably heard about that," Trump said. "They always like to say, `Oh, that's a conspiracy theory.' Not a conspiracy theory, folks. Millions and millions of people. And it's very hard because the state guards their records. They don't want us" to see them.

While there have been isolated cases of voter fraud in the U.S., past studies have found it to be exceptionally rare. Earlier this year the White House disbanded a controversial voter fraud commission amid infighting and lawsuits as state officials refused to cooperate.

In recent weeks, Trump has been pushing back more against the restraints of the office to offer more unvarnished opinions and take policy moves that some aides were trying to forestall.

"This was going to be my remarks. They would have taken about two minutes," Trump said as he tossed his script into the air. "This is boring. We have to tell it like it is."

As he has done before, Trump conjured images of violence and suffering when he described the perils of illegal immigration, though statistics show that immigrants commit crimes at a lower rate than citizens. He dubbed MS-13 gang members "thugs" and said his administration's crackdown on the group was "like a war."

"MS-13 is emblematic of evil, and we're getting them out by the hundreds," said Trump, who sat on stage at a long table in a gym draped in American flags and decorated with signs that read "USA open for business." "This is the kind of stuff and crap we are allowing in our country, and we can't do it anymore."

Invoking the lines of his June 2015 campaign kickoff speech, in which he suggested that some Mexican immigrants were rapists, the president appeared to claim that a caravan of migrants that had been working its way north through Mexico toward the United States was besieged with violence.

"Remember my opening remarks at Trump Tower when I opened? Everybody said, `Oh, he was so tough,' and I used the word rape," he said. "And yesterday it came out where this journey coming up, women are raped at levels that nobody has ever seen before. They don't want to mention that."

It was not clear what Trump was referring to. White House spokesman Hogan Gidley said Trump wasn't talking about the caravan but rather about extreme victimization of those making the journey north with smugglers in general.

Trump also defended his proposed tariff plan, which many of his fellow Republicans fear will start a trade war with China. He criticized West Virginia Sen. Joe Manchin, a Democrat who has expressed openness to working with the White House, for opposing the GOP tax plan. He praised local West Virginia politicians running for office and reminisced about his 2016 electoral victory in the Mountain State.

All of that overshadowed any time spent promoting the tax plan.

While Trump went off script, the attendees --an assemblage of state politicians, local business owners, workers and families -- stayed dutifully on task, talking about how the tax cuts have helped them.

Jessica Hodge tearfully told Trump: "I just want to say thank you for the tax cuts. This is a big deal for our family." Rep. Evan Jenkins, a Republican, said that "West Virginians understand your policies are working" and that Trump was "welcome to come back any time."