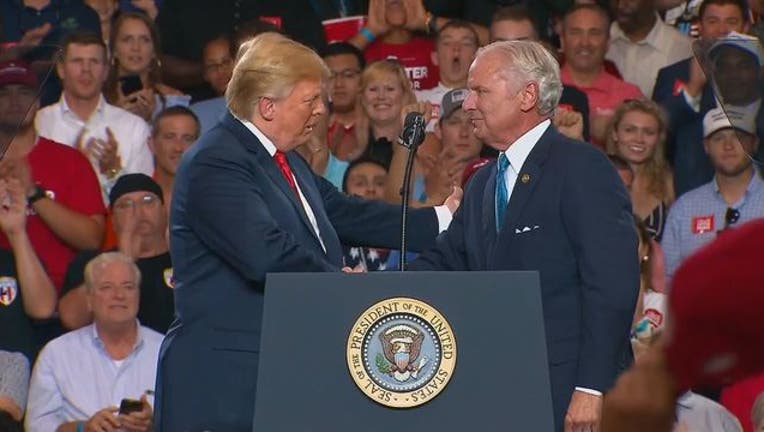 WEST COLUMBIA, S.C. (AP) — Revisiting past battles, President Donald Trump on Monday dug into his tough trade negotiations with U.S. allies, his ongoing fight with Democrats over immigration and his 2016 election as he rallied supporters behind South Carolina's Republican governor ahead of a tense runoff election.

Trump arrived an hour late after storms forced Air Force One to circle South Carolina's capital city, but he quickly implored Republicans to back Gov. Henry McMaster in Tuesday's contest. Trump pointed to his frequent nemesis, the news media, and warned that a loss for McMaster — he backed Trump in early 2016 — would be portrayed as a defeat for him.

"So please, get your asses out tomorrow and vote," Trump said.

In a steamy high school gymnasium where supporters fanned themselves with red "McMaster Governor" signs, Trump escalated a running feud with late-night talk-show hosts and elicited boos at his mention of Democratic Rep. Maxine Waters.

Trump had tweeted earlier Monday that Waters should "be careful" after she urged the public to make Trump administration officials feel unwelcome wherever they go in public. Waters spoke after the owner of a Virginia restaurant asked White House press secretary Sarah Huckabee Sanders to leave the establishment because she works for Trump, and in response to Trump's immigration policy of separating families at the U.S.-Mexico border.

Trump accused Democrats of wanting open borders and not minding crime, and portrayed himself as the nation's defender.

"We're defending our borders because if you don't have borders you don't have a country," he said. "Democrats want open borders and they don't mind crime."

"Johnny Carson was talented. This guy on CBS has no talent," he said referring to Colbert. Trump said Kimmel fawned over him when he appeared on the show and that he recently had to tell Fallon to "be a man" and not apologize for messing up Trump's hair during a 2016 appearance.

Trump's rally, in a state where he triumphed in a key Republican primary and easily defeated Democrat Hillary Clinton in 2016, also brought chants of "Lock her up!" when he mentioned his vanquished rival and "Build that wall!" when he delved into the immigration debate.

Hearing the chants, the president quickly corrected his audience: "It's not 'build that wall' anymore. It's 'continue building that wall,'" Trump said, pointing to a $1.6 billion down payment he secured last year, far short of the $25 billion he has requested from Congress.

The president insisted that he had been given a "bad hand" on a number of trade deals, and recounted his recent dealings with Canadian Prime Minister Justin Trudeau, telling the crowd that Trudeau didn't understand that "Air Force One has 22 televisions" so he was able to watch as Trudeau criticized Trump for hitting Canada with tariffs.

McMaster, a former lieutenant governor, became the nation's first statewide elected official to endorse Trump in January 2016. Trump won a convincing victory in the state's presidential primary and won the state in November.

McMaster became governor after Trump tapped then-South Carolina Gov. Nikki Haley to be his ambassador to the United Nations.

McMaster has aligned himself with Trump, defending the president's handling of immigration and praising Trump's recent summit with North Korean leader Kim Jong Un. McMaster has tried to make Trump a litmus test, noting that his opponent supported Sen. Ted Cruz of Texas in the 2016 presidential primary.

Greenville businessman John Warren, who served in the Marines and founded a mortgage lending business, has tried to claim the role of political outsider in a state where voters were drawn to Trump's populist appeal.

The winner will face Democratic state Rep. James Smith in November. The Republican-leaning state hasn't elected a Democratic governor since Jim Hodges in 1998.

Trump opened the rally with prayers for congressional candidate Katie Arrington, who was seriously injured in a car accident late Friday. Arrington, who was endorsed by Trump, ousted U.S. Rep. Mark Sanford, a frequent critic of the president.

Trump told the rally that Sanford is "a guy I never liked too much."