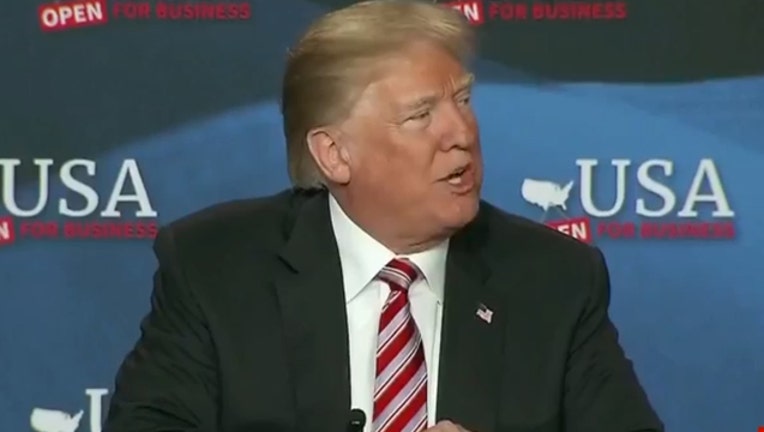 HIALEAH, Fla. - President Donald Trump said Monday the Republican tax law and his push to slash regulations are driving one of the "greatest booms" to the U.S. economy and helping Hispanic workers.

Trump praised the strength of the economy at a business round-table in a predominantly Latino Miami suburb, telling the audience the country is "starting to really rock" with businesses coming back to the country and corporations facing fewer regulations.

Trump was joined by local business owners in the Miami area and members of his Cabinet, underscoring the importance of the tax law and the business climate to Republicans' midterm election hopes. Florida has long been one of the nation's campaign battlegrounds and will be among several states contested by both parties in the fight to control Congress.

The event included testimonials from Florida Sen. Marco Rubio, a one-time campaign rival who praised the administration's handling of Cuba and Venezuela, and several Cuban business leaders. Trump did not publicly respond to the ABC News interview by former FBI Director James Comey, keeping focused instead on the economy.

Speaking a day before the personal income tax filing deadline, Trump said: "This is the last time we're going to fill out that long, complicated, horrible return." The president said next year, once the tax law is fully implemented, filing a federal return will be "simple and easy to do."

Trump has withheld the release of his personal tax returns, falling short of the standard followed by presidents since Richard Nixon started the practice in 1969. During the 2016 campaign, Trump argued he couldn't release his taxes because he was under an audit by the IRS.

At the Hialeah event, the president praised his new national security adviser John Bolton for the air strikes in Syria on Friday. As the crowd applauded, Trump joked, "Are you giving him all the credit? You know that means the end of his job."