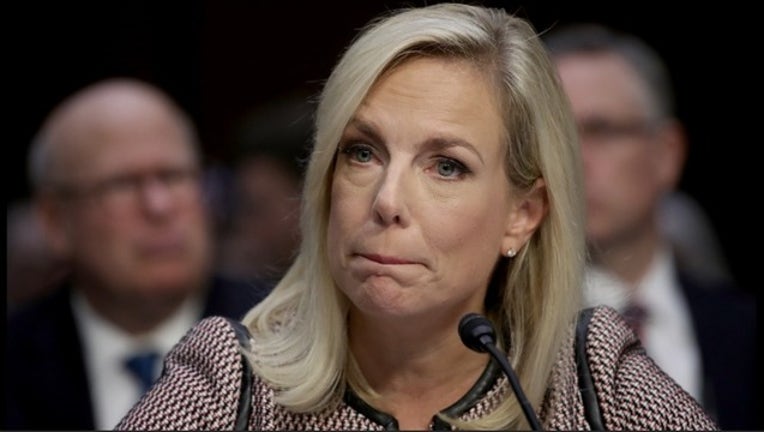 WASHINGTON (AP) - The clamor over President Donald Trump’s use of a vulgarity bled into a second week Tuesday as aides took issue with details in accounts of his comments and a Republican senator who was present for the original remark said the situation had become a “s-show.”

Trump was said to have uttered “shithole” during last Thursday’s conversation to describe countries in Africa during immigration talks with senators in the Oval Office, a version supported by Sen. Dick Durbin, D-Ill., and some Republicans.

Asked about Trump’s comments challenging his honesty, Durbin told reporters Tuesday: “I stand by every word I said about what was said.”

Later, Republican Sen. Lindsey Graham of South Carolina said Trump had drastically changed his tune on a compromise immigration bill just before the Thursday meeting. Graham said Trump had been badly served by his staff and the situation had turned into an “s-show.”

On Capitol Hill, Homeland Security secretary Kirstjen Nielsen testified under oath Tuesday that she “did not hear” Trump use the vulgarity to describe African countries. But she said she didn’t “dispute the president was using tough language.”

Sen. Patrick Leahy, D-Vt., asked her specifically if she heard the vulgarity or a “substantially similar word” to describe certain countries. She said “others in the room were also using tough language.”

There is internal debate in the West Wing over whether Trump said “shithole” or “shithouse.” One person who attended the meeting told aides they heard the latter expletive, while others recalled the president saying the more widely reported “shithole,” according to a person briefed on the meeting but not authorized to speak publicly about private conversations.

The person believes the discrepancy may be why some Republican senators are denying having heard the president say “shithole.”

Trump has not clarified to aides what he said, but told reporters Sunday night in Florida that comments attributed to him “weren’t made.” The White House has not denied that Trump used a vulgar term, and indicated Tuesday that no apology would be forthcoming. There appears to be little difference in meaning between the two words.

“The president hasn’t said he didn’t use strong language,” press secretary Sarah Sanders said. “This is an important issue, he’s passionate about it, he’s not going to apologize for trying to fix our immigration system.”

The debate continued to play out Tuesday as Washington was gripped with uncertainty over whether the government would shut down at midnight Friday, when temporary government funding is set to run out, in the absence of a deal on immigration and other matters. The path to a deal seems even more complicated after last week’s coarse Oval Office conversation, and Trump has accused Durbin of undermining the trust necessary to reach an agreement.

Without explicitly denying using the vulgarity, Trump lashed out at Durbin, who said Trump uttered it several times during the meeting.

“Senator Dicky Durbin totally misrepresented what was said at the DACA meeting,” Trump tweeted Monday, using a nickname to needle the Illinois senator. “Deals can’t get made when there is no trust! Durbin blew DACA and is hurting our Military.”

He was referring to the Deferred Action for Childhood Arrivals program, which protects young people who came to the U.S. as children and are living here illegally. Trump announced last year that he will end the Obama-era DACA program unless lawmakers come up with a solution by March. Members of Congress from both parties are trying to strike a deal that Trump would support to extend that protection.

Asked about Trump’s comments, Durbin said, “Politics ain’t beanbag. I understand that. But I’ll tell you this: I stand by every word I said about what was said and what happened.”

Republican Sen. Lindsey Graham of South Carolina, one of the six senators in the meeting with Trump on Thursday, supported Durbin’s account.

Durbin and people who were briefed on the conversation but were not authorized to describe it publicly said Trump also questioned the need to admit more Haitians. They said Trump expressed a preference for immigrants from countries like Norway, which is overwhelmingly white.

Republican Sens. David Perdue of Georgia and Tom Cotton of Arkansas, who also attended Thursday’s meeting, initially said they did not hear Trump utter the word in question, then revised their account to deny he said it at all.

Durbin said after the Oval Office meeting that Trump’s words to the senators were “vile, hate-filled and clearly racial in their content.”

A confidant of Trump told The Associated Press that the president spent Thursday evening calling friends and outside advisers to judge their reaction to his remarks. Trump wasn’t apologetic and denied he was racist, said the confidant, who spoke on condition of anonymity to discuss a private conversation.

Trump insisted afterward in a tweet that he “never said anything derogatory about Haitians other than Haiti is, obviously, a very poor and troubled country. Never said ‘take them out.’ Made up by Dems.” Trump wrote, “I have a wonderful relationship with Haitians.

The contentious comments came as Durbin was presenting details of a compromise immigration plan that had money for a first installment of the president’s long-sought border wall.

Trump took particular issue with the idea that people who’d fled to the U.S. after disasters hit their homes in places such as El Salvador, Guatemala and Haiti would be allowed to stay as part of the deal, according to the people briefed on the conversation.

When it came to talk of extending protections for Haitians, Durbin said Trump replied, “We don’t need more Haitians.’”

“He said, ‘Put me down for wanting more Europeans to come to this country. Why don’t we get more people from Norway?’” Durbin said.

Democrats have condemned Trump’s remarks as “racist,” a charge Sanders rejected as “outrageous.”

If the allegation were true, she asked reporters, “Why did NBC give him a show for a decade on TV? Why did Chuck Schumer and all of his colleagues come and beg Donald Trump for money?”