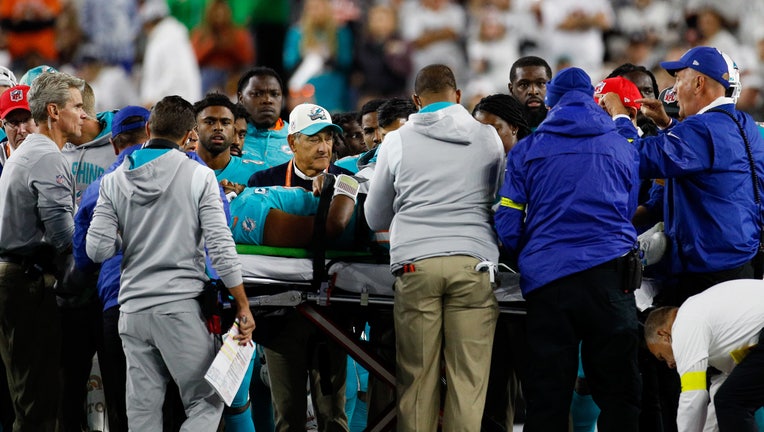 Miami Dolphins quarterback Tua Tagovailoa (1) is carted off the field during second quarter in the game against the Miami Dolphins and the Cincinnati Bengals on September 29, 2022, at Paycor Stadium in Cincinnati, OH. (Photo by Ian Johnson/Icon Sport

The NFL Players Association has fired the unaffiliated neurotrauma consultant who evaluated Miami Dolphins quarterback Tua Tagovailoa after he stumbled off the field against Buffalo last weekend, a person familiar with the decision told The Associated Press on Saturday.

The person who confirmed the firing, which was first reported by Pro Football Talk, spoke to the AP on condition of anonymity because a joint review by the NFL and its players' union into Tagovailoa's quick return to Sunday's game is ongoing.

There are three unaffiliated neurotrauma consultants (UNC) at each game. They are jointly paid by the league and the players’ union to work with team physicians to diagnose concussions. The NFLPA is exercising its right to terminate the UNC directly involved in the decision to clear Tagovailoa, who sustained a concussion following a frightening hit just four days later at Cincinnati on Thursday night.

Tagovailoa initially seemed to exhibit concussion symptoms after the hit to his head during the home game against Buffalo, but he was cleared by a team physician and UNC to return. He and the team later explained his legs were wobbly because of a back injury.

Amid Super Bowl month, officials with the NFL say they are giving $1 million in funding to investigate the effects of cannabinoids on pain management, as well as its impact on concussion. FOX 10's Steve Nielsen spoke with former NFL player Nick Lowery on how this could help keep future athletes safe.

After the hit on Thursday, when 6-foot-3, 340-pound Bengals defensive tackle Josh Tupou slammed him backward into the turf, Tagovailoa’s hands froze up and his fingers flexed awkwardly in front of his facemask for several seconds as he laid on the turf in Cincinnati. He remained on the ground for several minutes until he was taken away on a stretcher and sent to a hospital. He was released from the hospital and flew home with the team hours later.

It’s unknown whether there’s any correlation between the two injuries. Concussions are common in the NFL, especially when a player is thrown to the ground by a man Tupou’s size and his head hits the turf. 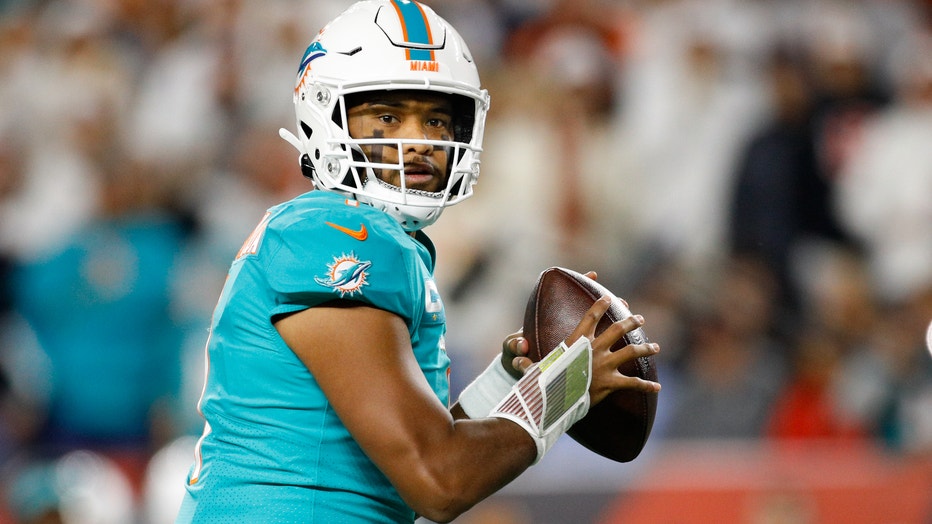 Miami Dolphins quarterback Tua Tagovailoa (1) looks to pass during the game against the Miami Dolphins and the Cincinnati Bengals on September 29, 2022, at Paycor Stadium in Cincinnati, OH. (Photo by Ian Johnson/Icon Sportswire via Getty Images

Dolphins coach Mike McDaniel defended the team’s handling of the quarterback's injury against the Bills, when he took a hit from linebacker Matt Milano late in the first half and appeared to knock his head on the turf. Tagovailoa stumbled when he got up and was taken to the locker room for evaluation, then returned to the game at the start of the third quarter.

READ MORE: Buccaneers-Chiefs to play as scheduled Sunday night in Tampa, despite Ian

McDaniel reiterated Friday that Tagovailoa was cleared by several layers of medical professionals during that game and said the QB did not have a head injury, which is why he was not in the concussion protocol heading into Thursday's game. McDaniel said Friday there is no timetable for Tagovailoa’s return.

Many observers questioned why Tagovailoa was allowed to return to the field against the Bills.

The league and the NFLPA issued a statement that said they had made no conclusions about "medical errors or protocol violations" while the investigation is still underway. But the two added that "modifications are needed ... to enhance player safety" and that they expect "changes to the (concussion) protocol" to happen "in the coming days based on what has been learned thus far in the review process."