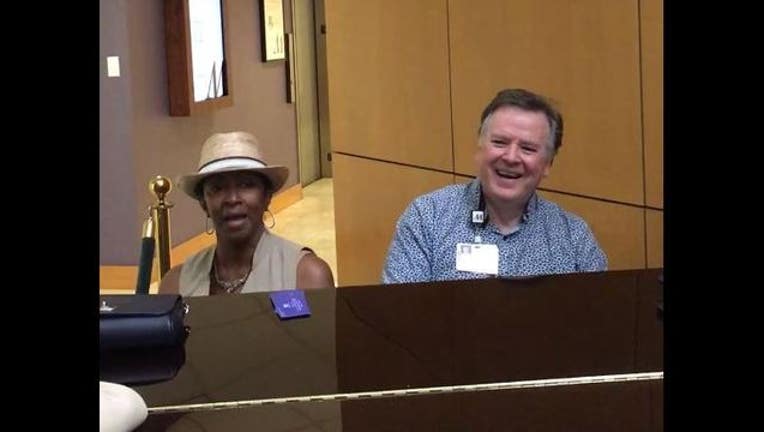 BAYTOWN, Texas - It has become a song heard around the world.

With over 5 million views, Pastor Mark Willhoite and his wife, Sherry, were visiting the Houston Methodist San Jacinto Hospital in Baytown, TX when an unexpected miracle happened.  "I am so overwhelmed and excited," said Pastor Mark.

Pastor Mark was playing the piano in the lobby of the hospital and singing when a stranger appeared. Vera Swain sat down on the bench beside the pastor and the magical moment happened.  "Vera was looking for a restroom and found me and my wife singing at the piano and sat down to join me," said Pastor Mark. "As soon as I heard Vera sing, I told my wife that we have got to capture this and put this online."

Sherry got out her camera and Vera and Pastor Mark started to sing. "This was an unrehearsed event, but it seems like we've been singing together for a lifetime."

Sherry posted the impromptu moment to her Facebook page and within a matter of days, the Facebook video has reached millions of people.

"Vera has become our best friend. She is an amazing person.  For 30 years, Vera has taken care of dialysis patients, where she would sing and comfort them," said Pastor Mark.  "We visit hospitals and nursing homes and minister to patients and visitors through song."

Pastor Mark and Vera will be flying to Atlanta September 3-4 to record the song, "What The World Needs Is Love" with Contemporary Christian recording producer David W. Huff in Good Hope, Georgia. "The studio is about an hour and half from Atlanta. I've known David for over 35 years," said David. "I met David in 1979 where he was singing at a church in Cleveland, Texas. I went to his concert, David and the Giants, and I knew there was a divine connection there."

According to Pastor Mark, fans only heard about ten percent of the song and he and Vera were just adlibbing at the hospital.

"These lyrics are going to change this nation," said Pastor Mark.