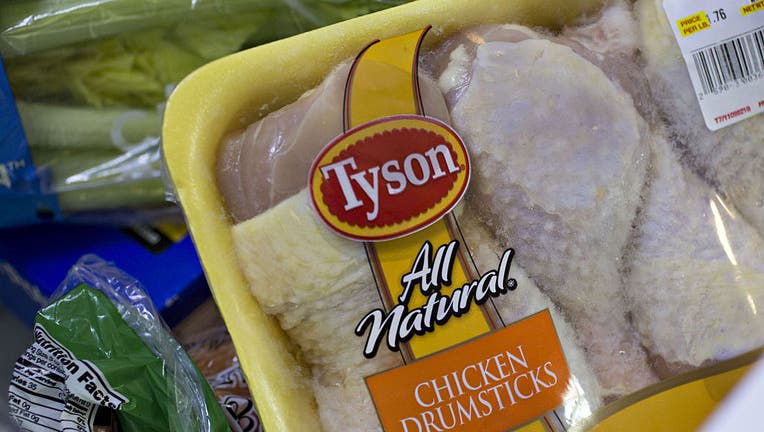 A package of Tyson Foods Inc. chicken is arranged for a photograph in Tiskilwa, Illinois, U.S., on Thursday, May 5, 2016. Tyson is scheduled to release earnings figured on May 9. Photographer: Daniel Acker/Bloomberg via Getty Images

According to Tyson Foods, chicken has risen in popularity as consumers shy away from expensive beef cuts.

During an earnings call on Monday, Tyson CEO Donnie King told analysts that despite the challenging economic environment, where costs of its goods continue to increase, "consumer demand for protein remains relatively steady."

However, some people are shifting away from high-priced meats as food prices continue to surge. Grocery prices alone increased 12.2% in June compared to a year ago, outpacing the overall Consumer Price Index.

On Monday, the meat producer reported that it saw "specific strength" in its chicken segment as well as with specific cuts of meat, such as breakfast sausage and bacon, throughout the three-month period ending on June 30, even though it raised prices on its meat to offset higher costs.

According to Reuters, the company raised chicken prices by slightly more than 20%.

The company reported that its sales gains "were largely driven by higher average sales price in chicken and prepared foods," underscoring the demand for the category.

"We delivered substantially improved earnings in our chicken segment as well as higher earnings in prepared foods, which partially offset a decline in beef and pork earnings," King told analysts.

Meanwhile, the company reported that it faced "softer consumer demand for premium cuts of beef" amid the challenging economic environment. As demand shifted, prices for the beef dipped.

According to Reuters, beef prices were down 1.2% in the quarter.

Still, King said the company's "diverse portfolio" allows them to "meet customer and consumer needs across a broad range of products and price points even as consumers shift between proteins and products."

The Associated Press contributed to this report. Read more of this story on FOX Business.