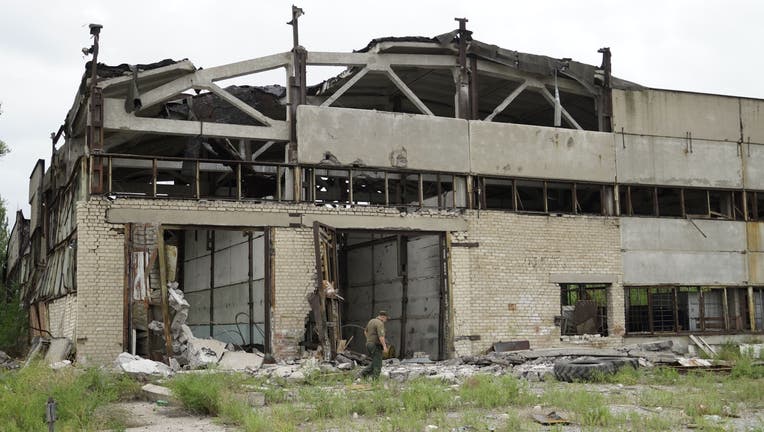 A view of a heavily damaged motor depot in the settlement of Myrne outside Melitopol in the Zaporizhzhia Oblast on September 12, 2022, amid the ongoing Russian military action in Ukraine. (Photo by STRINGER / AFP) (Photo by STRINGER/AFP via Getty Ima

KHARKIV, Ukraine - Ukrainian troops expanded their territorial gains Monday, pushing all the way to the country's northeastern border in places, and claimed to have captured a record number of Russian soldiers as part of the lightning advance that forced Moscow to make a hasty retreat.

A spokesman for Ukrainian military intelligence said Russian troops were surrendering en masse as "they understand the hopelessness of their situation." A Ukrainian presidential adviser said there were so many POWs that the country was running out of space to accommodate them.

Blue-and-yellow Ukrainian flags fluttered over newly liberated towns across a wide swath of reclaimed land. The Ukrainian military said it had freed more than 20 settlements in 24 hours. In recent days, Kyiv's forces have captured territory at least twice the size of greater London, according to the British Defense Ministry.

After months of little discernible movement on the battlefield, the momentum has lifted Ukrainian morale and provoked rare public criticism of Russian President Vladimir Putin's war.

"In some areas of the front, our defenders reached the state border with the Russian Federation," said Oleh Syniehubov, governor of the northeastern Kharkiv region.

The counteroffensive left the Kremlin struggling for a response to its largest military defeat in Ukraine since Russian forces pulled back from areas near Kyiv after a botched attempt to capture the capital early in the invasion.

The Russian Defense Ministry acknowledged the setback in a map that showed its troops pressed back along a narrow patch of land on the border with Russia -- a tacit admission of big Ukrainian gains.

Reports of chaos abounded as Russian troops pulled out.

"The Russians were here in the morning. Then at noon, they suddenly started shouting wildly and began to run away, charging off in tanks and armored vehicles," Dmytro Hrushchenko, a resident of recently liberated Zaliznychne, a small town near the eastern front line, told Sky News.

Video taken by the Ukrainian military showed soldiers raising the Ukrainian flag over battle-damaged buildings. In one scene, a fighter wiped his boots on a Russian flag on the ground. Other videos showed Ukrainians inspecting the wreckage of Russian military vehicles, including tanks.

In his evening address, Ukrainian President Volodymyr Zelenskyy said his forces have liberated more than 6,000 square kilometers in the east and the south since the beginning of September.

Now Ukrainian teams are disarming land mines and other unexploded weapons in the recaptured areas and searching for any remaining Russian troops, officials said.

It was not yet clear if the Ukrainian blitz could signal a turning point in the war. Momentum has switched back and forth before, but rarely with such a big and sudden swing.

Ukraine's deputy interior minister accused fleeing Russian forces of burning official documents and concealing bodies in an attempt to cover up rights violations in the areas they controlled until last week.

CLICK HERE FOR MORE STORIES ON THE WAR IN UKRAINE

The mood was jubilant across the country.

In Kharkiv, Ukraine's second-largest city and the capital of the region where the gains have been made, authorities hailed that power and water had been restored to about 80% of the region's population following Russian attacks on infrastructure that knocked out electricity in many places across Ukraine.

"You are heroes!!!" Kharkiv Mayor Ihor Terekhov wrote on Telegram, referring to crews who restored utilities in Ukraine's second-biggest city. "Thanks to everyone who did everything possible on this most difficult night for Kharkiv to normalize the life of the city as soon as possible."

Meanwhile in Russia, signs of disarray emerged as Russian military bloggers and other commentators chastised the Kremlin for failing to mobilize more forces and take stronger action against Ukraine.

Russia has continuously stopped short of calling its invasion a war, instead describing it as a "special military operation" and relying on on a limited contingent of volunteers instead of a mass mobilization that could spur civil discontent and protest.

Ramzan Kadyrov, the Moscow-backed leader of the Russian region of Chechnya, publicly criticized the Russian Defense Ministry for what he called "mistakes" that made the Ukrainian blitz possible.

Even more notable, such criticism seeped onto state-controlled Russian TV.

"People who convinced President Putin that the operation will be fast and effective ... these people really set up all of us," Boris Nadezhdin, a former parliament member, said on a talk show on NTV television. "We're now at the point where we have to understand that it's absolutely impossible to defeat Ukraine using these resources and colonial war methods."Some in Russia blamed Western weapons and fighters for the losses.

"It's not Ukraine that attacked Izium, but NATO," read a headline in the state-supported Komsomolskaya Pravda newspaper, referring to one of the areas where Russia said it has withdrawn troops.

Elsewhere, residents of a Russian village just across the border from Ukraine were evacuated after shelling by Ukrainian troops killed one person, according to Russia's Tass news agency.

The report cited the head of the local administration in Logachevka, who said Ukrainian troops opened fire at a border checkpoint.

Pro-Kremlin separatists reported that Ukrainian troops were approaching the town of Lyman, a rail hub captured by Russia in late May that offers access to bridges over the nearby Siversky Donets river.

Denis Pushilin, head of the self-proclaimed Donetsk People's Republic, acknowledged that the situation was "difficult."

Even amid Ukraine's ebullience, the casualties kept mounting. Ukraine's presidential office said Monday that at least four civilians were killed and 11 others wounded in a series of Russian attacks in nine regions of the country. The U.N. Human Rights Office said last week that 5,767 civilians have been killed so far.

Among Monday's attacks were strikes on residential areas in Kharkiv that killed at least one civilian and set multiple fires, local officials said.

In a reminder of the war's toll, a council member in Izium accused enemy forces of killing civilians and committing other atrocities. Maksym Strelnikov told reporters Monday in an online briefing that hundreds of people had died during the fighting and after Russia seized the town in March.

Many died from shelling and could not get a proper burial, he said. His claims could not be immediately verified, but similar scenes have played out in other places captured by Russian forces.

The Ukrainian military also claimed to have found more evidence of human rights violations by Russian occupiers. It did not elaborate.

Izium was a major base for Russian forces in the Kharkiv region. The first Ukrainian flag was raised over the city on Saturday, according to Strelnikov. Residents, some wrapped in the country's flag, greeted Ukrainian forces and offered them food.

Ukraine said the Russians continued shelling Nikopol across the Dnieper River from the Zaporizhzhia power plant, damaging several buildings there and leaving Europe's largest nuclear facility in a precarious position. The last operational reactor in that plant has been shut down in a bid to prevent a radiation disaster as fighting raged nearby.

The Washington-based Institute for the Study of War said Monday that Kyiv "will likely increasingly dictate the location and nature of the major fighting."

The British Defense Ministry said the retreat would likely further deteriorate the trust Russian forces have in their commanders and put Moscow's troops on the back foot.
------
Arhirova reported from Kyiv.
--------
Follow AP war coverage at https://apnews.com/hub/russia-ukraine