WASHINGTON - President Joe Biden on Wednesday acknowledged the strain on families from nationwide shortages of infant formula as he met with manufacturers while his administration tries to address the situation by importing foreign supplies and using the Defense Production Act to speed domestic production.

The White House said a third round of formula shipments from overseas will begin next week, from producer Kendamil in Britain. Shipments from Bubs Australia will be delivered next week as well.

"There’s nothing more stressful than feeling you can’t get what your child needs," Biden said, adding that as a "father and a grandfather," he understands how difficult the shortages have been for parents and their children.

Biden hosted a roundtable with leaders of manufacturers ByHeart, Bubs Australia, Reckitt, Perrigo Co. and Gerber. The list is notable for the absence of Abbott Nutrition, whose Michigan plant was shut down in February over safety concerns, sparking the shortage in the United States.

President Biden is taking immediate action to address the baby formula shortage crisis nationwide. The White House says it will invoke the Defense Production Act and launch Operation Fly Formula to expedite special flights of formula supply from other countries.

He was joined by Heath and Human Services Secretary Xavier Becerra and Surgeon General Vivek Murthy. The meeting was a chance to provide an update on what the administration is calling "Operation Fly Formula" to import formula and to use the Korean War-era production law to require suppliers to prioritize their orders in a bid to ease production bottlenecks.

The White House said the latest round of shipments would bring Kendamil formula from Heathrow Airport in London to U.S. airports over a three-week period, starting June. 9. The flights will carry about 3.7 million 8-ounce bottle equivalents, shipped free of charge by United Airlines.

The first shipments will include Kendamil Classic Stage 1 and Kendamil Organic formulas, which will be available at Target stores across the United States.

Bubs Australia will ship the equivalent of 4.6 million 8-ounce bottles of its infant formula on Defense Department-contracted commercial aircraft from its hub in Melbourne, Australia, to Pennsylvania and California on June 9 and June 11, respectively.

Biden said that without such efforts, "it would have taken three weeks to get this product to the United States," but it arrived "in three days."

The push on imports will help but will not immediately bring an end to supply shortages that have left people who depend on formula facing empty shelves or limits on purchases. 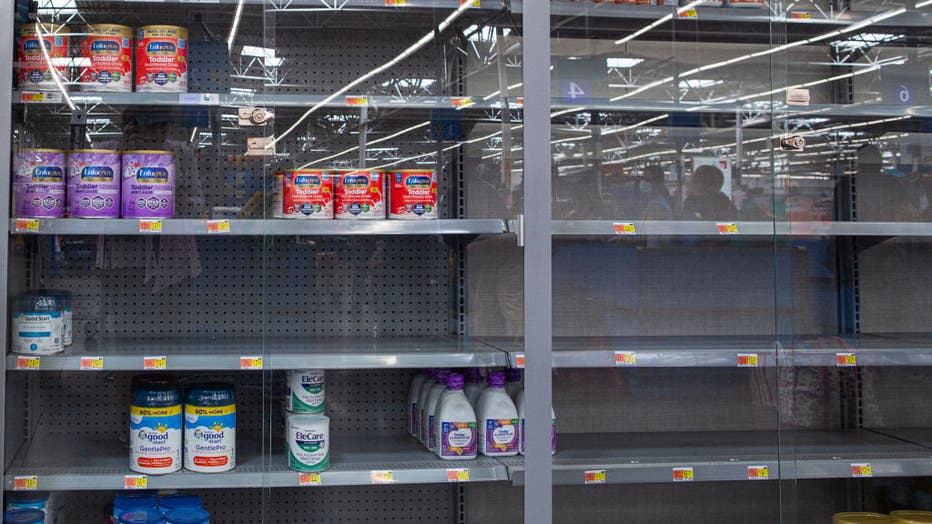 FILE - Shelves are empty at a Walmart store during a baby formula shortage on May 26, 2022, in North Bergen, New Jersey. (Photo by Kena Betancur/VIEWpress)

The Food and Drug Administration began focusing on Abbott’s plant last fall while tracking several bacterial infections in infants who had consumed formula from the facility. The four cases occurred between September and January, causing hospitalizations and two deaths.

After detecting positive samples of rare but dangerous bacteria in multiple parts of the plant, the FDA closed the facility and Abbott announced a massive recall of its formula on Feb. 17.

"The last thing we should do is allow unsafe formula to be sold to parents," Biden said.

U.S. regulators and Abbott announced an agreement last month that would help pave the way for reopening the plant, though production has not restarted.

The White House did not respond to a request for comment on why Abbott was not included from Wednesday’s meeting.