Dealing with COVID-19: How to live with the virus

As new variant continue to spread across the U.S., we talk with doctors about how to live with the virus now and in the future.

WASHINGTON (AP) - The White House is planning for "dire" contingencies that could include rationing supplies of vaccines and treatments this fall if Congress doesn’t approve more money for fighting COVID-19.

In public comments and private meetings on Capitol Hill, Dr. Ashish Jha, the White House coronavirus coordinator, has painted a dark picture in which the U.S. could be forced to cede many of the advances made against the coronavirus over the last two years and even the most vulnerable could face supply shortages.

Biden administration officials have been warning for weeks that the country has spent nearly all the money in the $1.9 trillion American Rescue Plan that was dedicated directly to COVID-19 response.

A small pool of money remains, and the administration faces critical decisions about how to spend it. That means tough decisions, like weighing whether to use it to secure the next generation of vaccines to protect the highest risk populations or giving priority to a supply of highly effective therapies that dramatically reduce the risks of severe illness and death.

That decision may be made in the coming week, according to the administration, as the White House faces imminent deadlines to begin placing orders for vaccines and treatments before other nations jump ahead of the U.S. in accessing supply. 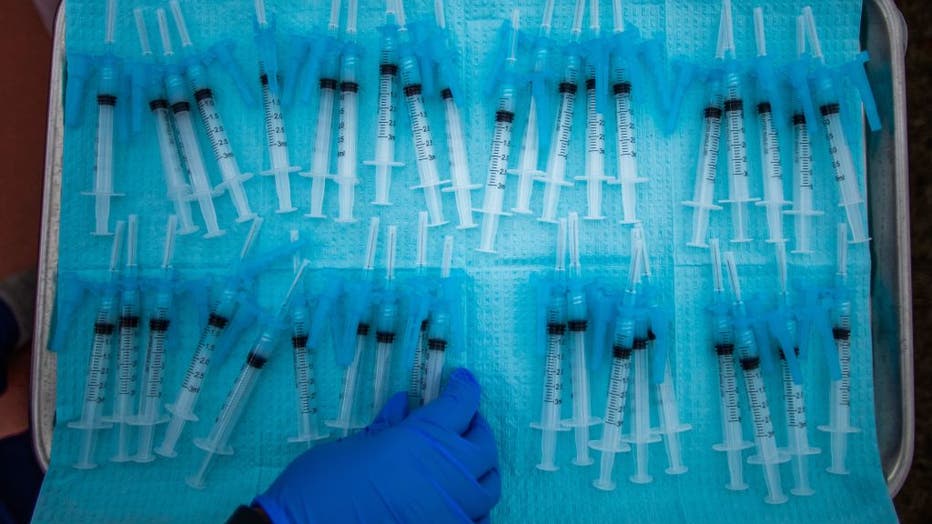 A nurse takes a Moderna Covid-19 vaccines ready to be administered at a vaccination site at Kedren Community Health Center, in South Central Los Angeles, California on February 16, 2021. (Photo by Apu Gomes/AFP via Getty Images)

RELATED: Poll: 1 in 3 Americans say COVID-19 is over amid rising cases

Jha has warned that without more money, vaccines will be harder to come by, tests will once again be scarce, and the therapeutics that are helping the country weather the current omicron-driven surge in cases without a commensurate increase in deaths could be sold overseas before Americans can access them.

"I think we would see a lot of unnecessary loss of life if that were to happen," Jha said this past week. "But we’re looking at all the scenarios and planning for all of them."

He said the administration was "getting much more into the scenario-planning business to make sure that we know what may be ahead of us so we can plan for it and obviously also lay those out in front of Congress."

Jha, who declined to put a specific projection on potential loss of life, has become the face of the Biden administration’s efforts to persuade Congress to approve an additional $22.5 billion for COVID-19 response.

"The scenarios that we’re planning for are for things like what if Congress gives us no money and we don’t have adequate vaccines," Jha told the AP in a May 12 interview. "We run out of therapies. We don’t have enough tests. What might things look like? Obviously, that’s a pretty dire situation."

Already, the domestic production of at-home testing is slowing, with workers beginning to be laid off. In the coming weeks, Jha said, manufacturers will sell off equipment and "get out of this business," leaving the U.S. once again dependent on overseas suppliers for rapid test.

Drug manufactures and the Food and Drug Administration, meanwhile, are working on evaluating the next generation of vaccines, potentially including ones that are targeted at the dominant omicron strain. But getting them ready before the predicted case surge in the fall means placing orders now, since they take two to three months to produce.

Jha said this week that the U.S. has yet to start negotiations with drugmakers because of the lack of money.

The U.S., he said, doesn't have enough money to purchase additional booster vaccines for anyone who wants one. Instead, the supplies of those vaccines may be restricted to just the most vulnerable — not unlike the chaotic early days of the COVID-10 vaccine roll-out.

"Without additional funding from Congress, we will not be able to buy enough vaccines for every American who wants one once these new generation of vaccines come out in the fall and winter," he said.

RELATED: CDC expands COVID-19 booster recommendation to include kids 5 to 11

And while the U.S. has built up a stockpile of the antiviral pill Paxlovid, which has been widely effective at reducing severe disease and death, it’s running out of money to purchase new doses — or other, even more effective therapies that are in the final stages of development.

"If we don’t get more resources from Congress, what we will find in the fall and winter is we will find a period of time where Americans can look around and see their friends in other countries — in Europe and Canada — with access to these treatments that Americans will not have," Jha said.

A congressional deal for a slimmed-down COVID-19 response package of about $10 billion fell apart in March over the Biden administration’s plans to lift virus-related restrictions on migration at U.S. borders. But a federal judge on Friday put that plan on hold, just days before it was to take effect on Monday.

There is no guarantee of swift action on Capitol Hill, where lawmakers — particularly Republicans — have grown newly wary of deficit spending. On Thursday, a $40 billion measure to assist restaurants that struggled during the pandemic failed on those grounds. GOP lawmakers have also objected to additional funding for the global pandemic response, and called for any new virus response funding to come from unspent economic relief money in the $1.9 trillion rescue plan.

The administration is preparing to lay the blame on lawmakers if there are tough consequences this fall due to lack of money. Still, it could be perilous for Biden, who has struggled to fulfill his promise to voters to get control of the pandemic.