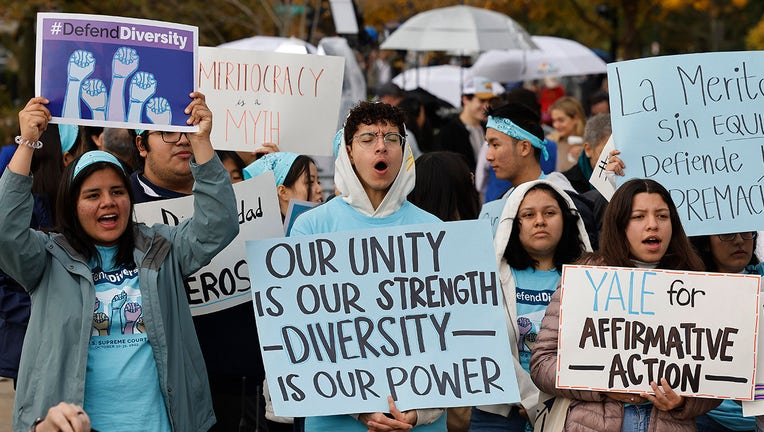 Proponents for affirmative action in higher education rally in front of the U.S. Supreme Court on October 31, 2022 in Washington, DC. (Photo by Chip Somodevilla/Getty Images)

WASHINGTON - The survival of affirmative action in higher education appeared to be in serious trouble Monday at a conservative-dominated Supreme Court after hours of debate over vexing questions of race.

The most diverse court in the nation's history — among the nine justices are four women, two Black people and a Latina — is weighing challenges to admissions programs at the University of North Carolina and Harvard that use race among many factors in seeking a diverse student body.

The court's six conservative justices all expressed doubts about the practice, which has been upheld under Supreme Court decisions reaching back to 1978. The court's three liberals defended the programs, which are similar to those used by many other private and public universities.

Getting rid of race-conscious college admissions would have a "destabilizing" effect that would cause the ranks of Black and Latino students to plummet at the nation’s most selective schools, Solicitor General Elizabeth Prelogar, representing the Biden administration, said.

Following the overturning of the half-century abortion precedent of Roe v. Wade in June, the cases offer a big new test of whether the court, with its 6-3 conservative edge, will sharply steer the law to the right on another contentious cultural issue that conservatives have had in their sights for years.

The questions the justices offered further laid bare the stark ideological divisions on the court in an era of intense political polarization in the country.

Justice Clarence Thomas, the court's second Black justice, who has a long record of opposition to affirmative action programs and other conservative positions, noted he didn’t go to racially diverse schools, at one point saying, "I’ve heard the word ‘diversity’ quite a few times, and I don’t have a clue what it means." He also challenged defenders of affirmative action to "tell me what the educational benefits are."

Justice Amy Coney Barrett, another conservative, pointed to one of the court's previous affirmative action cases and said it anticipated a halt to its use in declaring that any classification based on race was "dangerous" and had to have an end point.

She was among several conservatives who pushed lawyers representing the schools and the Biden administration to venture a guess when that day would come.

"Your position is that race matters because it’s necessary for diversity, which is necessary for the sort of education you want. It’s not going to stop mattering at some particular point," said Chief Justice John Roberts, who has long been skeptical of considerations of race.

Justice Samuel Alito likened affirmative action to a footrace in which a minority applicant gets to "start five yards closer to the finish line." But liberal Justice Sonia Sotomayor, the court's first Hispanic member, rejected that comparison saying what universities are doing is looking at students as a whole.

Likewise, Justice Ketanji Brown Jackson, the court’s newest justice and its first Black woman, also said race was being used among 40 different factors at the University of North Carolina as part of a broad review of applicants.

"They’re looking at the full person with all of these characteristics," she said.

Justice Elena Kagan, who was the first female dean at Harvard Law School earlier in her career, called universities the "pipelines to leadership in our society" and suggested that without affirmative action minority enrollment will drop.

"I thought part of what it meant to be an American and to believe in American pluralism is that actually our institutions, you know, are reflective of who we are as a people in all our variety," she said.

The Supreme Court has twice upheld race-conscious college admissions programs in the past 19 years, including just six years ago.

But that was before the three appointees of former President Donald Trump joined. Jackson was chosen this year by President Joe Biden.

Lower courts have upheld the programs at both UNC and Harvard, rejecting claims that the schools discriminated against white and Asian-American applicants.

The cases are brought by conservative activist Edward Blum, who also was behind an earlier affirmative action challenge against the University of Texas as well as the case that led the court in 2013 to end the use of a key provision of the landmark Voting Rights Act.

Blum formed Students for Fair Admissions, which filed the lawsuits against both schools in 2014.

The group argues that the Constitution forbids the use of race in college admissions and calls for overturning earlier Supreme Court decisions that said otherwise.

Colleges and universities can use other, race-neutral ways to assemble a diverse student body, including by focusing on socioeconomic status and eliminating the preference for children of alumni and major donors, Students for Fair Admissions argues.

Justice Neil Gorsuch pressed Ryan Park, a lawyer for North Carolina, on why colleges shouldn't be forced to eliminate those preferences, "which tend to favor the children of wealthy white parents," to see if it allowed them to increase diversity without considering race.

A college might end up with a more diverse student body, but "we just would have a crummy squash team and no art museum," Gorsuch said.

In the Harvard case, lawyer Seth Waxman pointed to lower court findings rejecting claims that Harvard discriminates on the basis of race. Waxman said the school looks for many different kinds of diversity, including having oboe players for its student orchestra.

"We did not fight a civil war over oboe players," Roberts countered, a sharp allusion to the nation's long struggle with race. 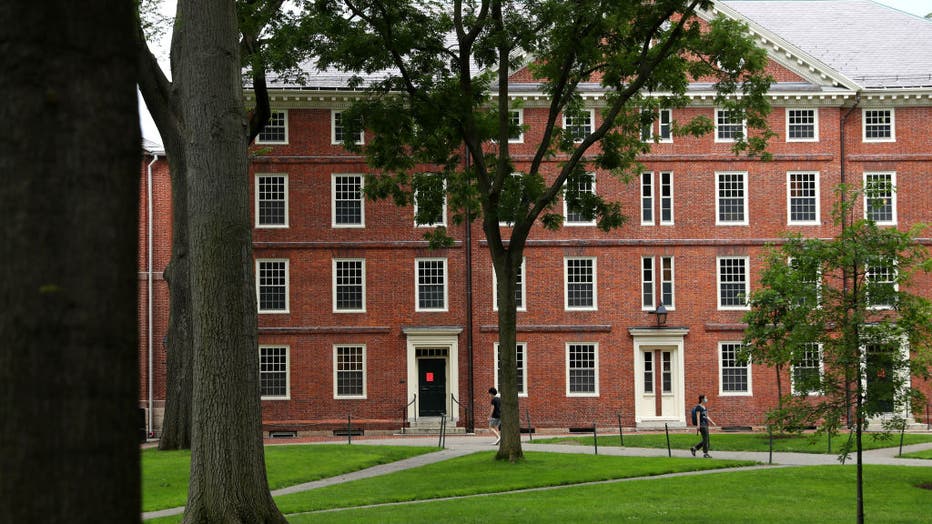 FILE - A view of Harvard Yard on the campus of Harvard University on July 8, 2020, in Cambridge, Massachusetts. (Photo by Maddie Meyer/Getty Images)

The schools contend that they use race in a limited way, but that eliminating it as a factor altogether would make it much harder to achieve a student body that looks like America.

The Biden administration is urging the court to preserve race-conscious admissions. The Trump administration had taken the opposite position in earlier stages of the cases.

UNC says its freshman class is about 65% white, 22% Asian American, 10% Black and 10% Hispanic. The numbers add to more than 100% because some students report belonging to more than one category, a school spokesman said.

White students are just over 40% of Harvard's freshman class, the school said. The class also is just under 28% Asian American, 14% Black and 12% Latino.

In 2020, California voters easily rejected a ballot measure to bring back affirmative action.

Public opinion on the topic varies depending on how the question is asked. A Gallup Poll from 2021 found 62% of Americans in favor of affirmative action programs for racial minorities. But in a Pew Research Center survey in March, 74% of Americans, including majorities of Black and Latino respondents, said race and ethnicity should not factor into college admissions.

Jackson and Roberts received their undergraduate and law degrees from Harvard. Two other justices went to law school there.

Jackson is sitting out the Harvard case because she was until recently a member of an advisory governing board there.

A decision in the affirmative action cases is not expected before late spring.