The Department of Justice will investigate police decisions from the Uvalde school shooting. A former chief prosecutor talks to FOX 4 about what that investigation might include.

UVALDE, Texas - The blame for an excruciating delay in killing the gunman at a Texas elementary school -- even as parents outside begged police to rush in and panicked children called 911 from inside -- has been placed with the school district's homegrown police chief.

It's left residents in the small city of Uvalde struggling to reconcile what they know of the well-liked local lawman after the director of state police said that the commander at the scene -- Pete Arredondo -- made the "wrong decision" last week not to breach a classroom at Robb Elementary School sooner, believing the gunman was barricaded inside and children weren't at risk.

Steven McCraw, the head of the Texas Department of Public Safety, said at the Friday news conference that after following the gunman into the building, officers waited over an hour to breach the classroom. Nineteen children and two teachers were killed in the shooting.

Arredondo, who grew up in Uvalde and graduated from high school here, was elected earlier this month to the Uvalde City Council. A special City Council meeting for him and two re-elected incumbents to take their oaths of office had been set for Tuesday evening, but Mayor Don McLaughlin said Monday that the meeting wouldn't be held. Then the mayor issued a Tuesday evening statement saying no ceremony had been held, but the members were sworn in Tuesday.

The 50-year-old Arredondo has spent much of a nearly 30-year career in law enforcement in Uvalde, returning in 2020 to take the head police job at the school district.

When Arredondo was a boy, Maria Gonzalez used to drive him and her children to the same school where the shooting happened. "He was a good boy," she said.

"He dropped the ball maybe because he did not have enough experience. Who knows? People are very angry," Gonzalez said.

Another woman in the neighborhood where Arredondo grew up began sobbing when asked about him. The woman, who didn't want to give her name, said one of her granddaughters was at the school during the shooting but wasn't hurt. 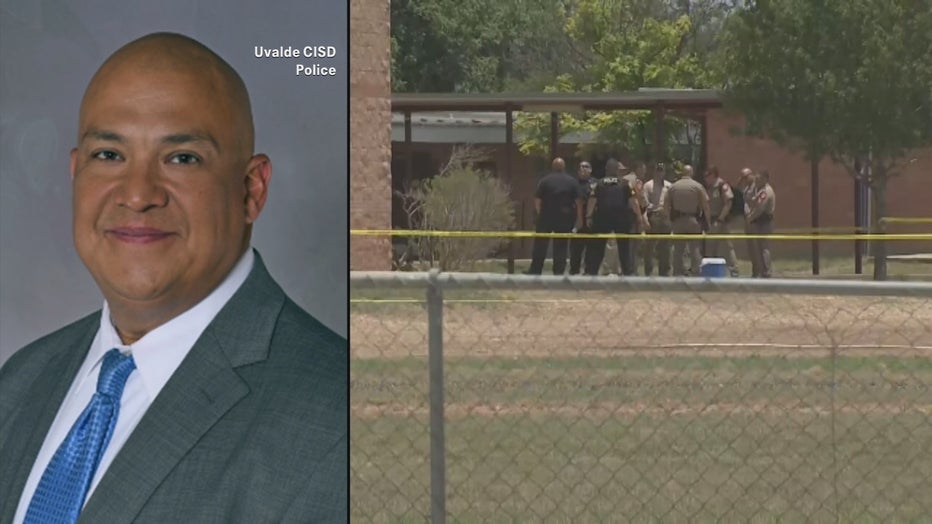 Juan Torres, a U.S. Army veteran who was visibly upset with reports coming out about the response, said he knew Arredondo from high school.

"You sign up to respond to those kinds of situations" Torres said. "If you are scared, then don't be a police officer. Go flip burgers."

After his election to the non-salaried spot on the City Council, Arredondo told the Uvalde Leader-News earlier this month that he was "ready to hit the ground running."

"I have plenty of ideas, and I definitely have plenty of drive," he said, adding he wanted to focus not only on the city being fiscally responsible but also making sure street repairs and beautification projects happen.

At a candidates' forum before his election, Arredondo said: "I guess to me nothing is complicated. Everything has a solution. That solution starts with communication. Communication is key."

McCraw said Friday that minutes after the gunman entered the school, city police officers entered through the same door. Over the course of more than an hour, law enforcement from multiple agencies arrived on the scene. Finally, officials said, a U.S. Border Patrol tactical team used a janitor's key to unlock the classroom door and kill the gunman.

McCraw said that students and teachers had repeatedly begged 911 operators for help while Arredondo told more than a dozen officers to wait in a hallway. That directive -- which goes against established active-shooter protocols -- prompted questions about whether more lives were lost because officers didn't act faster.

Two law enforcement officials have said that as the gunman fired at students, law enforcement officers from other agencies urged Arredondo to let them move in because children were in danger, The officials spoke on condition of anonymity because they had not been authorized to talk publicly about the investigation.

In his Monday statement, McLaughlin, the Uvalde mayor, pushed back on officials' claims, including remarks made over the weekend by Texas' lieutenant governor, that they weren't told the truth about the massacre. McLaughlin said in that statement that local law enforcement hadn't made any public comments about the investigation's specifics or misled anyone.

But in his Tuesday statement, McLaughlin, noting that "emotions are raw, and hearts are broken," said he "misunderstood" statements he thought Lt. Gov. Dan Patrick had said.

Arredondo started out his career in law enforcement working for the Uvalde Police Department. After spending 16 years there, he went to Laredo, a border city located 130 miles (209 kilometers) miles to the south, where he worked at the Webb County Sheriff's Office and then for a local school district, according to a 2020 article in the Uvalde Leader-News on his return to his hometown to take the school district police chief job. The school district's board of trustees approved his appointment to the spot.

According to the Uvalde school district's website, the police force led by Arredondo also has five other officers and a security guard.

Ray Garner, the police chief of the district in Laredo where Arredondo worked, told the San Antonio Express-News in a story published after the Uvalde shooting that when Arredondo worked in the Laredo district he was "easy to talk to" and was concerned about the students.

"He was an excellent officer down here," Garner told the newspaper . "Down here, we do a lot of training on active-shooter scenarios, and he was involved in those."

After that news conference, members of the media converged at Arredondo's home and police cruisers took up posts there. Arredondo has not responded to multiple requests for comment from The Associated Press.

At one point, a man answering the door at Arredondo's house told a reporter for The Associated Press that Arredondo was "indisposed."

"The truth will come out," said the man before closing the door.

State Sen. Roland Gutierrez, a Democrat whose district includes Uvalde, said on CNN's "State of the Union" on Sunday that he's asking a lot of questions after "so many things went wrong."

He said one family told him that a first responder told them that their child, who was shot in the back, likely bled out. "So, absolutely, these mistakes may have led to the passing away of these children as well," Gutierrez said.

Gutierrez said while the issue of which law enforcement agency had or should have had operational control is a "significant" concern of his, he's also "suggested" to McCraw "that it's not fair to put it on the local (school district) cop."

"At the end of the day, everybody failed here," Gutierrez said.