Video filmed by Beatriz Acevedo Tachna shows the bats flying from a cave along a roadside on July 27, 2022.

A woman captured stunning footage of a large bat colony pouring out of a cave in Mexico.

The video, filmed on Wednesday evening by Beatriz Acevedo Tachna, shows the massive group flying from a cave in the town of Topolobampo, which is located on the Gulf of California in the northwestern state of Sinaloa.

Thousands of bats are seen emerging from the cave and flying over a roadside.

Tachna, who told Storyful that the bats usually emerge before sunset, has filmed the spectacular scene before.

"They leave as soon as they feel the sun is going to set. This daily show is a beauty and Sinaloan treasure," she wrote alongside a previous July 4 video, according to an English translation.

While a few expressed some fear at the idea of seeing so many bats at once, many responded to Tachna’s video of the bat show on Twitter, calling it a "bucket list" moment and a "wonderful" sight.

It was also reposted by another account, which described the scene as an "endless river of bats."

Locally, the cave is also known as "Cueva de Los Murciélagos," which translates to "Cave of the Bats," according to a Sinaloa tourism website.

"During the day, (they) lie asleep face down on the ceiling of the cave, but that at dusk they wake up to start their nocturnal hunt, in a show that momentarily covers the sky with thick black clouds, full of these little animals," the website states, according to an English translation. 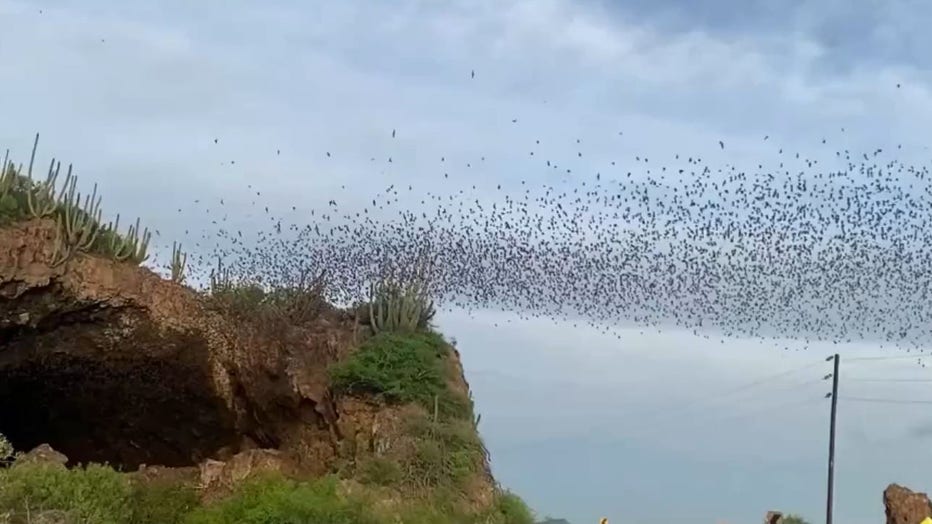 A screengrab of a video shows part of the massive bat colony flying from a cave in Topolobampo, Mexico, on July 27, 2022. Credit: Beatriz Acevedo Tachna via Storyful

Most bats are nocturnal and they forage for their food at night, according to the Library of Congress’ Zoology page. As a result, they seek out caves to safely sleep in during the day and be out of reach of most of their enemies.

Most bat colonies leave their caves "more or less together," in large groups after dark, it adds. Research has shown that these animals use a magnetic substance in their body called magnetite as an "internal compass" to help them navigate.

In Mexico, there are at least 137 species of bats, wildlife officials say.