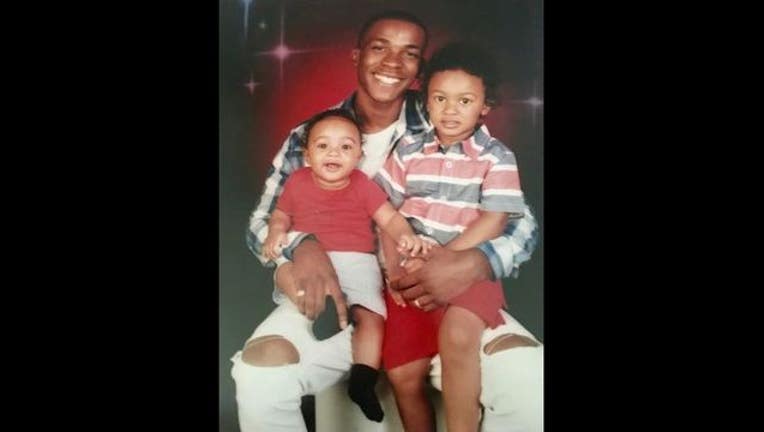 SACRAMENTO, Calif. (AP) - Two officers yelled for a suspect to show his hands then shouted "gun, gun, gun" moments before fatally shooting the man who turned out to be unarmed, audio from body camera footage released Wednesday by Sacramento police shows.

Footage from the body cameras and an overhead helicopter does not clearly depict what the man, who was only holding a cellphone, was doing in the moments before the police fired on Sunday night. The shooting happened in the backyard of the man's grandparent's home, where he was staying. The police did not find a gun at the scene.

The Sacramento Police Department said the man, who was black, was seen breaking into at least three vehicles and later into a neighbor's home. The break ins were first reported by a 911 call also released by the police.

The police said deputies in the helicopter saw the man break a neighbor's sliding glass door before jumping a fence. The helicopter video does not show the alleged break-in. It picks up as the man is running through a backyard and climbing over a fence into a neighboring property. It shows him looking into a truck in the driveway.

The helicopter, flying over the house, then loses sight of the man. It briefly shows him in the backyard as the police are running up the driveway along the side of the house.

"Show me your hands - gun!" one officer yells, according to the body camera footage. It is dark outside and a flashlight from one body camera briefly shows the backyard, but the man is not visible. "Gun, gun, gun," one of the officers yells before they begin shooting.

The helicopter footage shows Clark collapsing as they shoot. It's unclear from the helicopter and body camera video exactly how many shots were fired. Police previously said the officers fired 20 shots.

The department had said he advanced toward the officers holding an object extended in front of him. The officers thought he was pointing a handgun, police said.

After the shooting, the footage shows the officers taking turns reloading and keeping their guns trained on the man from a distance while they await backup.

When backup arrives, one of the officers who fired says, "We can't see his left hand." Someone suggests getting a nonlethal weapon before approaching.

"Let's hit him a couple of times with that before we uh--" the officer says, though it appears the suggestion was heeded.

"What'd he have on him?" someone asks.

"Something in his hands, it looked like a gun from our perspective," one officer says.

As several officers approach, the man is seen lying face down with an iPhone near his head. He's handcuffed and the officers discuss performing CPR.

The officers who fired are taken to the street, where someone says "Hey mute" and the audio cuts out. The video continues without sound for about two minutes as the officers talk.

"Based on the videos alone, I cannot second guess the split-second decisions of our officers and I'm not going to do that," Mayor Darrell Steinberg said in a statement. "The investigation must be completed. We need more information in addition to the video before we can render any final conclusions."

Steinberg said appropriate questions have been raised about the protocols for using force and rendering emergency aid during police shootings and they must be answered in the investigation.

Authorities have not released the man's name but a woman who said she was his fiancee identified him as Stephon Alonzo Clark, 22, the father of her two sons, ages 1 and 3. The shooting has ignited questions by relatives, activists and others after it turned out he was holding only a cellphone.

"We're mourning right now and so we need our time to mourn," Salena Manni, said Wednesday as the family gathered in his grandparents' home.

"He was at the wrong place at the wrong time in his own backyard?" Clark's grandmother, Sequita Thompson, told The Sacramento Bee . "C'mon now, they didn't have to do that."

The department could not say how many times Clark was hit, and the coroner's office was not releasing information until his relatives were notified. The department said the two officers have been with Sacramento police for two and four years, but each has four years' previous experience with other law enforcement agencies. Both are on paid administrative leave.

The story has corrected the spelling of the dead man's first name based on his fiancee's comments.