Anthony Paredes ran from police after his girlfriend stole tequila and he threated to hurt a Safeway employee. San Jose police deployed a K-9. When the dog found him, it clamped down on his neck for 60 seconds. This body camera video is graphic and disturbing to watch.

SAN JOSE, Calif. - WARNING: Images in this story are graphic and disturbing.

Anthony Paredes never missed a chance to show off his voice.

Even as he struggled to keep his rocky life on track, the 41-year-old sang every Sunday at church, belted out tunes at family functions and loved karaoke.

But his voice was forever damaged two years ago when a San Jose police K-9 sunk its teeth into his throat and held on for a full minute, shredding his windpipe and fracturing thyroid cartilage.

Parades was suspected of helping his girlfriend in a robbery and he was hiding in a trash bin when police deployed their German shepherd, Tex, to apprehend him.

Anthony Paredes ran from police after his girlfriend stole tequila and he threated to hurt a Safeway employee. San Jose police deployed a K-9. When the dog found him, it clamped down on his neck for 60 seconds. This body camera video is graphic and disturbing to watch.

"He lost something," Paredes' aunt, Leticia Salazar, said in a recent interview. "He lost that little kick. He lost that happy-go-lucky guy that he was."

The episode underscores major concerns critics have been raising about the use of K-9s: Unlike other use-of-force options, police dogs can be unpredictable, often leading to devastating and disproportionate injuries regardless of what a person has done. In Paredes’ case, his injuries were nearly fatal, requiring two weeks in a hospital.

And while advocates have long praised police dogs as valuable tools to reduce risks to officers, critics say most situations can be resolved without deploying a K-9.

In California, there’s little accountability after a police dog injures and maims someone. And state law leaves it up to each agency to decide how the animals are used.

SJPD deploy the most K-9s in Bay Area

The San Jose Police Department declined to comment on the case due to the pending litigation. Paredes has filed a federal excessive force lawsuit against SJPD.

But the city attorney’s office denied wrongdoing in court papers.

Deputy City Attorney Kathryn Zoglin wrote that Parades' injuries resulted from his own "wrongful actions" and that he had "committed crimes including, but not limited to, failure to yield to police authority."

Paredes’ lawyer countered that the attack on his client highlights how vicious police dog bites can be, adding that it's shameful how callous the police and the public view these K-9 injuries.

"Anthony’s life had no value and they treated him like garbage and he almost died," said civil rights attorney Izaak Schwaiger. "He came within inches of his life while the very people who were sworn to protect him stood by and did nothing."

Advocates say dogs do their jobs

But pro-K-9 advocates argue that the K-9 did its job and using them often protects police.

Don Cameron, a retired Bay Area police officer and use-of-force trainer, said Paredes had many opportunities to surrender before police deployed the dog.

Because Paredes was in the trash bin, Cameroon said the officers couldn’t use batons, Tasers or other force options. 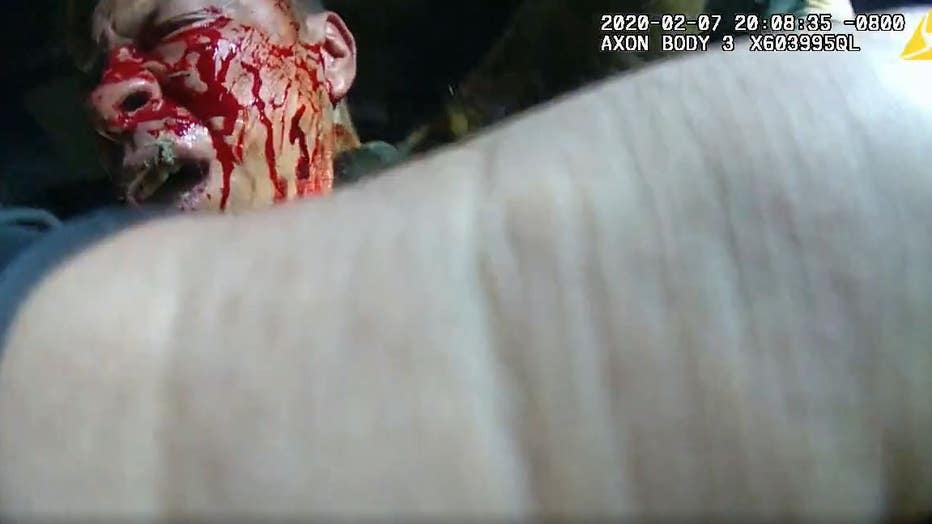 Anthony Paredes' windpipe was crushed by a SJPD K-9 in 2020.

The K-9 scenario unfolded on Feb. 7, 2020, when an employee at a Safeway on Berryessa Road called police saying a woman had grabbed more than $350 worth of tequila and attempted to run, according to a police report of the incident obtained by KTVU.

When the worker tried to stop the woman, Paredes ran up and threatened to "cut" the employee, the report says. Records show Paredes never brandished a knife. Police later found he had brass knuckles.

Paredes and his girlfriend fled on foot into a surrounding neighborhood where Paredes was captured on a police helicopter’s thermal camera. Officers approached the backyard with Tex. The K-9 discovered Paredes had crawled into a trash bin.

The dog pawed at the bin and barked as officers approached with their guns drawn. An officer grabbed a broom and pushed the bin over, toppling it to the ground.

"Show us your hands!" the officers yelled to Paredes.

Seconds later, the dog bit down on his neck.

"Don’t fight the dog! Let go of the dog!" an officer yelled.

Officers began pulling Paredes out of the bin. Still, the dog remained clamped on his throat as an officer pulled on the dog’s harness.

"That’s contrary to police training and common sense," Schwaiger told KTVU. "Dogs have curved teeth. They’re like fishhooks. When you pull back, it just tears more and teeth become more firmly embedded in whatever they’re biting." 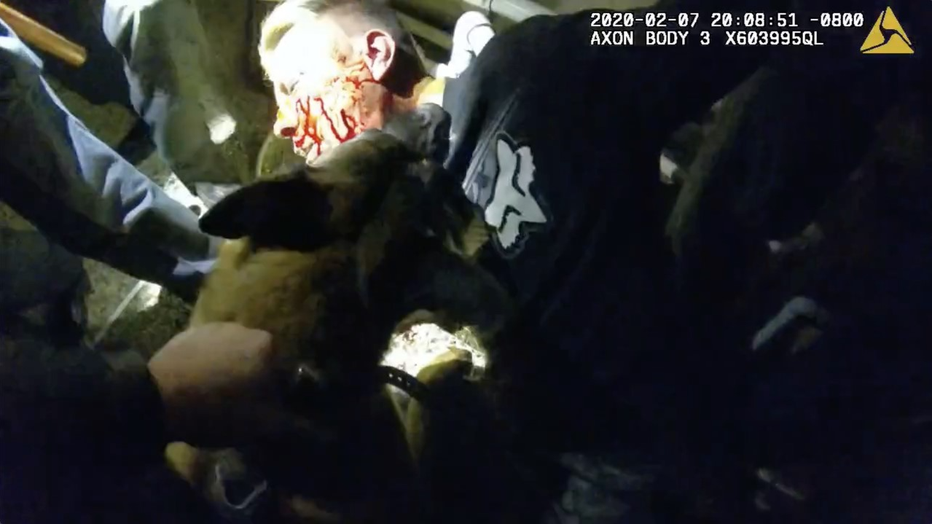 Anthony Paredes was hiding in a trash bin when Tex, a San Jose police dog, bit his neck for a minute in February 2020.

Dog clamped on throat for 60 seconds

Ernest Burwell, a retired Los Angeles County Sheriff K-9 handler and police dog expert, reviewed the video as he was asked to write up a report for Schwaiger’s suit. He does not think the police dog was used appropriately.

"The dog was holding onto Anthony’s neck like it was some kind of wild dog over in Africa where it was going to choke him to death," Burwell said. "Everybody just stood around and did nothing to get that dog off for a long period of time. The other officers need to be held accountable for failing to intervene."

In Burwell’s opinion, the handler should have called the dog back, and given Paredes a chance to exit the waste bin. The dog also shouldn’t have been "on the bite" for so long, Burwell said. The recommended time is 10 seconds or less, he said.

Burwell said he supports the use of police apprehension K-9s – when they’re used with restraint.

"I don’t want to see anybody lose their K-9 department," Burwell said. "It’s a very important tool. But unless something changes, it will happen."

Paredes later pleaded guilty to one count of being an accessory and possession of brass knuckles. He was sentenced to two years in state prison. 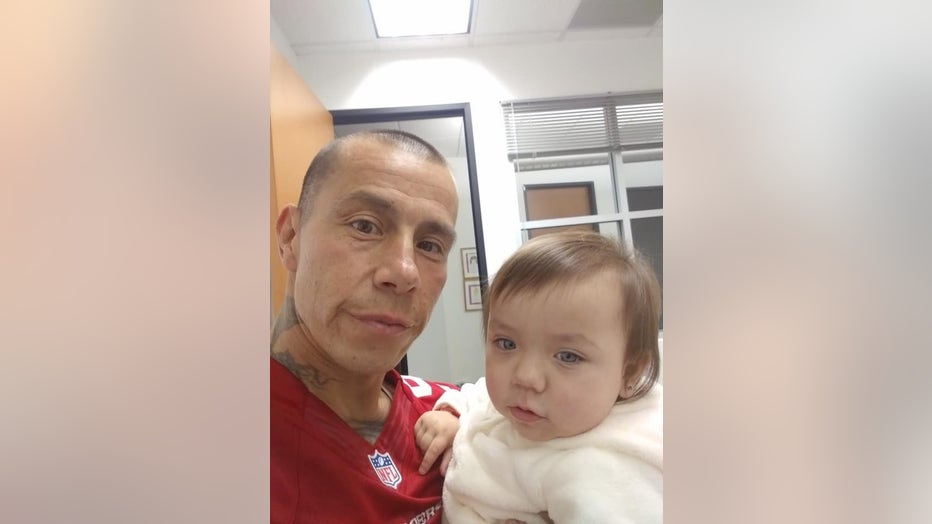 Suspect can no longer sing

The two-year sentence was only the latest in Paredes' troubled life.

At 16, he was getting into trouble on the street and was shot six times. He faced his own charge of assault with a deadly weapon while a juvenile, records show.

He later struggled with homelessness and drug addiction, including meth and heroin use, his defense attorney said in court papers. He was arrested several times over the years for drug-related offenses.

Since he was bitten by the K-9, Parades has been sober, his attorney said.

He’s also a father to a baby girl.

He currently works at a hospital testing people for COVID, his aunt said.

And he still goes to the Family Life Center Church on Hellyer Avenue in San Jose.

But he’s no longer in the choir.

He can speak but he cannot sing.

His aunt said that her nephew, one that she considers a son, has changed not only physically, but emotionally as well.

He suffers night terrors and needs prescribed medication to sleep.

"He’s having a hard time dealing with it," Salazar said about her nephew. "He’s trying to push forward every day. He lost something. He used to walk in the house and sing his Jesus songs. He doesn’t do that anymore."