Bodycam video shows the shocking moments an armed Florida man allegedly used a 1-year-old child as a human shield during a standoff with Flagler County deputies. (WARNING: The video contains sensitive content that may be difficult to watch)

PALM COAST, Fla. - Bodycam video shows the shocking moments an armed Florida man allegedly used a 1-year-old child as a human shield during a standoff with Flagler County deputies. WARNING: The video contains sensitive content that may be difficult to watch.

Deputies say 27-year-old Brandon Matthew Douglas Leohner kidnapped his girlfriend's child and then led deputies on a chase that ended at a McDonald's in Palm Coast.

On Sept. 27, the Flagler County Sheriff's Office responded to home on Bunker Lane in Palm Coast after getting a call about a possible abduction. Deputies reportedly discovered that Leohner took the child while armed with a gun and drove with the child on his lap as he left the home.

"Deputies located the male a short time later driving recklessly through medians while speeding south on Belle Terre Parkway," the sheriff's office wrote on Facebook. "When deputies attempted to conduct a traffic stop on the vehicle, Leohner fled traveling east onto State Road 100, driving over the median and through oncoming traffic before turning into the Target shopping center in Town Center." 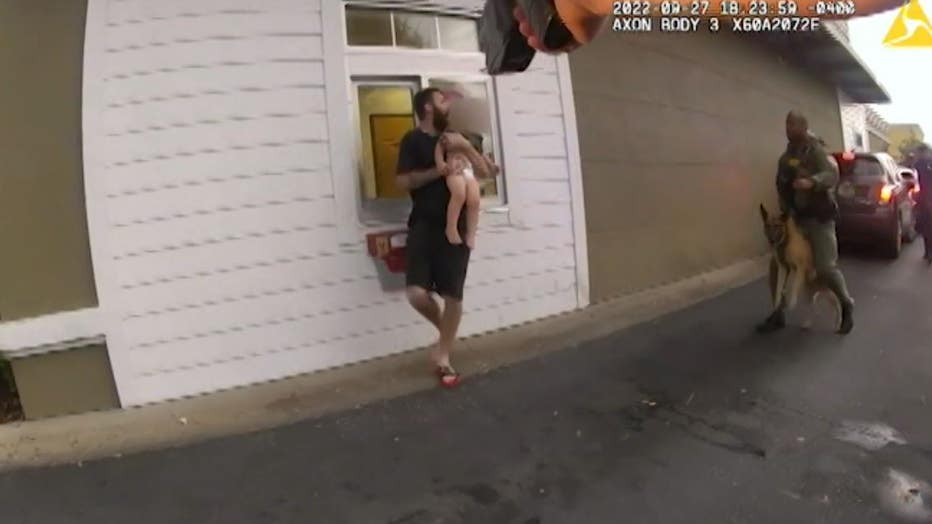 Leohner then allegedly drove into the nearby McDonald’s parking lot and got out of the vehicle near the drive-thru with the child in his arms, using the child as a human shield and refusing to obey law enforcement commands to put the child down. Bodycam video from the sheriff's office showed the exchange between deputies and Leohner.

"Put the baby down!" one deputy yells to Leohner. "Put the kid down!"

After a brief standoff, deputies deployed a taser and Leohner dropped to the ground. Deputies are seen carrying the child to safety.

Florida woman, 21, accused of stabbing sister to death for flirting with her boyfriend

Moments later, the video shows Leohner up and appearing to try and run away until a K-9 grabs him and deputies use a taser on him again. He was then placed in handcuffs and paramedics were called in to treat his wounds.

Sadly, the child is heard saying "Dada" over and over again during the incident.

"Here is a case of a domestic situation turning violent, putting a 1-year-old child and innocent drivers in danger," said Flagler County Sheriff Rick Staly. "Deputies were confronted with a very chaotic situation and a very combative individual that was putting his child at risk by using the child as a shield. Our deputies did everything they could to quickly rescue this child safely from a madman and apprehend the suspect. Fortunately, the child was not hurt and was quickly reunited with his mother."

Leohner was arrested and is facing charges of kidnapping, using a minor as a shield, resisting with violence, child neglect, fleeing and eluding and reckless driving.

Leohner reportedly has no prior arrests in Flagler County.