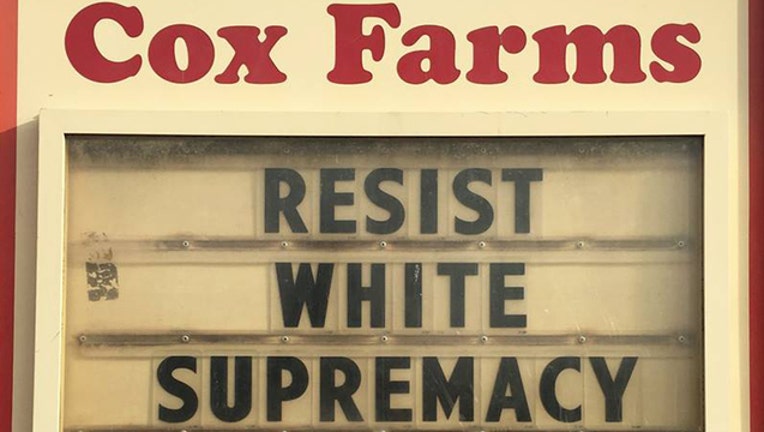 WASHINGTON - A sign outside a Centreville, Va. farm has gone viral, after the family-owned business posted a photo of the message board, which reads "Resist White Supremacy."

Cox Farms on Braddock Road normally uses their sign to featured produce advertisements, as well as witty words and aphorisms to visitors and passersby.

In the continuing conversation on KKK and white supremacy, the farm owners say that the message is not political, but one as "concerned citizens of this country."

The farm posted a photo along with the following message on its Facebook page to clarify their position:

"Last week, some of our customers and neighbors asked us to clarify the sentiment behind our sign that said 'Rise & Resist.' So, we changed it to read 'Rise Up Against Injustice' and 'Resist White Supremacy.' We sincerely believe that fighting injustice and white supremacy is a responsibility that can- and should- unite us all. We struggle to see how anyone other than self-identified white supremacists would take this as a personal attack.

We’re not seeking to alienate folks who have different perspectives on tax reform or infrastructure spending. But when it comes to speaking out against systems of oppression and injustice, we see it as our moral responsibility to use our position of privilege and power, along with the tools of our trade and the platforms available to us, to engage visibly and actively in the fight for justice. Our roadside sign messages are one small way we do this."

The sign has received both praise and scrutiny on social media for their choice of words. Some people saw the sign as divisive.

Robert Schiano from Florida responded, "Our continued focus on victimism is very destructive. It’s an easy way to avoid personal accountability. Accountability requires great maturity and courage. Our young are rating themselves by how victimized they are. Certainly a formula for failure and the end of our republic."

Michelle Dellinger from Virginia wrote, "It’s a shame you do not see what you are doing by continuing to divide. Sadly I grew up in the area and saw many white against black fight at my hs. Why can’t you promote good instead of negatives. We need to stop seeing color and seeing humanity."

Other people supported the sign and called the message brave.  Some people inquired if Cox Farms would ship their produce to other areas of the country, as well as Canada and supported the farm's message.

"I've been to Cox Farms a few times, and it warms my heart to know that it's not just supporting a local business, but that it's supporting a business that boldly speaks out for equality. I hope your messages serve as an example to other small businesses!" said Mike McClellan from Maryland.

Lynn Scales wrote: "I almost cried reading this post. These people make America great! Not those seeking to divide our country or claim superiority over others but those who INCLUDE everyone!!!! God will continue to bless Cox Farms!!! Honesty and awareness can go a very long way!!!! Wonderful job! Keep the signs coming! My family is planning a trip to DC this summer and if you are open for business, we will make a special stop with our kids!!!"

The farm came under scrutiny in 2015 after a "Black Lives Matter" sign was displayed in the window of a home neighboring the farm.

The Washington Post reported that Brad Carruthers, president of Fairfax Fraternal Order of Police Lodge 77, said he would not patronize Cox Farms and urged others to do the same, calling the sign “disturbing and disappointing.” Carruthers later took down the post.

The farm owners defended the sign, even though it wasn't on their property and affirmed a positive relationship with Fairfax County police.

"Neither our family nor our business is anti-cop, and we are absolutely anti-violence, against anyone," they said.

"As a family, we are anti-racist and pro-justice. We recognize that systemic racism is real, and we embrace our roles as allies working to dismantle it."

The farm has been supportive of various causes, including LGBT rights.

"About fifteen years ago, some visitors started a boycott of our Fall Festival because we flew rainbow flags over our hay tunnel, and they were concerned that Cox Farms was 'promoting the homosexual agenda.' Our business has continued to grow, and our rainbow flags are still flying."