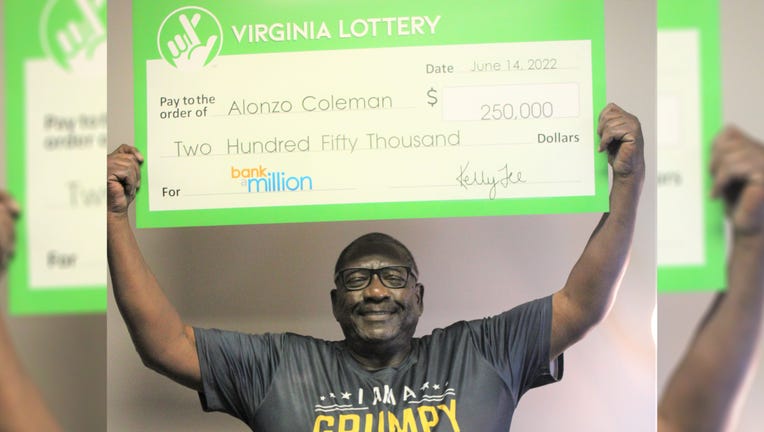 Alonzo Coleman is pictured in a provided image after winning $250,000 in Virginia’s Bank a Million game. (Credit: Virginia Lottery)

A Virginia man won a $250,000 lottery prize after taxes using numbers that came to him in a dream.

Alonzo Coleman, a retiree who lives in the Henrico, Virginia, area, played the state’s Bank a Million game, in which individuals pick six different numbers from 1 through 40. The players can win $1 million, $500,000, and $250,000 after taxes, depending on whether the person wagers $2 or splits the wager two or four ways.

He later matched all six winning numbers for the June 11 drawing. Since he split his $2 wager four ways when he bought the ticket, he had four sets of numbers. Using the "Play Your Way" feature, he won $250,000 on one of his sets of numbers, lottery officials said.

"It was hard to believe!" Coleman told Virginia lottery officials. "It still hasn’t hit me yet!"

He bought his ticket at Glenside Corner Mart in Henrico.

The Virginia Lottery generates more than $2 million per day for Virginia’s K-12 public schools, generating over $765 million in funding for the fiscal year ending June 30, 2021, according to officials.

Meanwhile, a South Carolina man recently found himself $100,000 richer after testing out a lottery strategy he saw while watching an episode of the TLC series "Lottery Changed My Life," which chronicles the change in lifestyle and appearance of lottery winners.

"The first week I won $500," the man told state lottery officials. "I didn’t even know how to play Powerball."