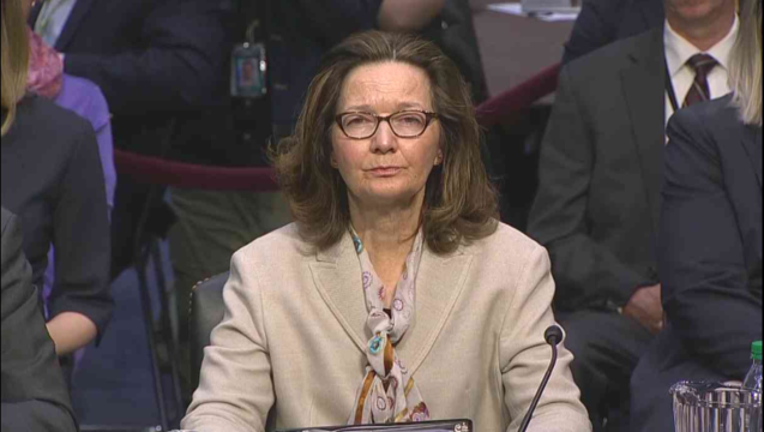 CIA nominee Gina Haspel speaks at a confirmation hearing. May 9, 2018

WASHINGTON (AP) - President Donald Trump's nominee to be the next CIA director says that if she is confirmed by the Senate, the spy agency will not undertake a detention and harsh interrogation program like the one used after 9/11.

The CIA released excerpts of the opening remarks Gina Haspel will make at her confirmation hearing Wednesday before the Senate intelligence committee. Haspel's fate hinges on how well she fields tough questions from senators who want details of her time running a covert detention site where terror suspects were brutally interrogated and seek an explanation for why she wanted videos of the sessions destroyed.

"I understand that what many people around the country want to know about me are my views on CIA's former detention and interrogation program," Haspel says in the excerpts. "Having served in that tumultuous time, I can offer you my personal commitment, clearly and without reservation, that under my leadership, CIA will not restart such a detention and interrogation program."

Haspel's promise to fight any attempt to resurrect the program could put her at odds with Trump, who spoke during the campaign about toughening the U.S. approach to fighting extremists and vowed to authorize waterboarding and a "hell of a lot worse."

Trump, however, has made no move to implement that promise since he has taken office. He has praised Haspel's three decades of intelligence experience and has said Democrats are wary of her because she has been tough on terrorists.

"This is a woman who has been a leader wherever she has gone. The CIA wants her to lead them into America's bright and glorious future!" Trump tweeted Tuesday.

In other excerpts, Haspel pledges to work closely with the Senate oversight committee. She said she would fight to put more intelligence officers in the field abroad, emphasize foreign language proficiency and work to strengthen partnerships with U.S. allies. She also says there has been an outpouring of support from young women at the CIA who hope she becomes the first female CIA director.

"It is not my way to trumpet the fact that I am a woman up for the top job, but I would be remiss in not remarking on it - not least because of the outpouring of support from young women at CIA who consider it a good sign for their own prospects," Haspel says.

Haspel, a 61-year-old career undercover spy who has been acting CIA director since Mike Pompeo was nominated as secretary of state, has been practicing her answers at mock confirmation hearings with former top intelligence officials. Many of them praise her 33-year tenure at the agency in foreign and domestic assignments, and she received glowing endorsements from Republican senators.

A GOP colleague on the committee, Sen. John Cornyn of Texas, lamented how Haspel's nomination fueled a "toxic political environment." He said Democrats and other opponents have engaged in "character assassination" before giving her the opportunity to answer questions and defend herself.

Democrats have complained repeatedly that the CIA has failed to declassify enough information on her career, leaving the public in the dark about the person who might end up leading the CIA.

Sen. Ron Wyden, D-Ore., and three of his Democratic colleagues recently wrote a letter to Dan Coats, the director of national intelligence, asking that his office, which oversees all U.S. intelligence agencies, declassify the documents. He cited a provision of an executive order that prohibits information from being classified "in order to conceal violations of law, inefficiency or administrative error" or "to prevent embarrassment to a person, organization or agency."

"This is really a high-stakes hearing," Wyden said. He warned it would set a damaging precedent "if this administration is allowed to get away with what I consider to be a secret confirmation" for the most visible official in U.S. intelligence.

Sen. Richard Burr of North Carolina, the Republican chairman of the intelligence committee said the documents will not be made public or declassified.

"That has never happened in the history of the CIA, and it's not going to happen with Gina Haspel's nomination," he said.

It's unclear when the committee will vote on Haspel's nomination. After that, it will go to the full Senate for a vote. Without Sen. John McCain of Arizona, who is battling brain cancer, the Republicans hold a 50-49 majority in the Senate. Most Republicans, except Sen. Rand Paul of Kentucky, are expected to vote for Haspel, though support is not certain, which means she would need at least one Democratic vote to be confirmed. Vice President Mike Pence, as president of the Senate, can be called on to break a tie vote.

As the hearing neared, Haspel's critics outside Congress stepped up their opposition, arguing that anyone who willingly participated in one of the CIA's darkest chapters should not head the spy agency. They argue that having Haspel as the face of U.S. intelligence will undercut America's effort to champion human rights.

Robert Ford, former U.S. ambassador to Syria and a fellow at the Middle East Institute in Washington, said that while U.S. military personnel had been punished for human rights abuses such as at Abu Ghraib prison in Iraq, few intelligence professionals were reprimanded for their activities with the detention and interrogation program that had been approved by the White House and reviewed and approved by the Justice Department.

A confirmation of Haspel would be interpreted overseas as implicit approval of a program of harsh detention and interrogation, Ford said.

Ali Soufan, a former FBI agent who interrogated high-value terror detainees, said he has concerns about how Haspel drafted a cable ordering the destruction of 92 videotapes made at the Thailand site. Haspel's boss, Jose Rodriguez, actually dispatched the order in 2005 to have the tapes shredded.

Soufan, who now heads a private risk-assessment firm, asked whether Haspel wanted them destroyed to protect the identities of CIA personnel who worked there or because they would discredit the agency.

Last month, the CIA released a memo showing Haspel was cleared of wrongdoing in the destruction of the videotapes. The memo, written in 2011, summarizes a disciplinary review conducted by then-CIA Deputy Director Mike Morell. He said that while Haspel was one of the two officers "directly involved in the decision to destroy the tapes," he "found no fault" with what she did.