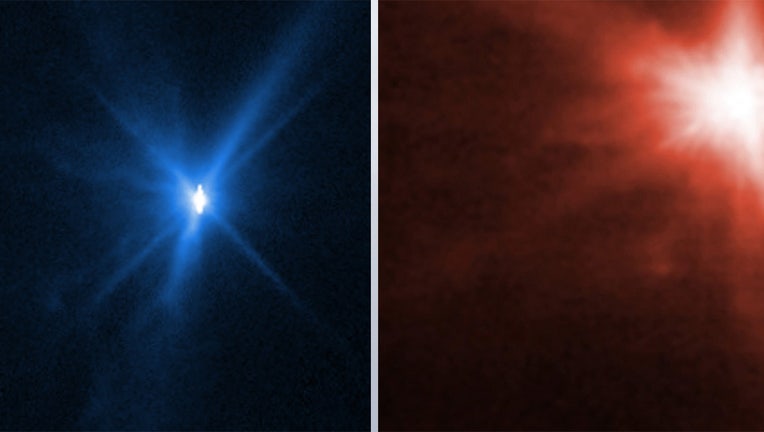 This is the very first time both the Hubble and Webb have simultaneously observed the same celestial target, the space agency added.

Webb’s images show a bright white light with a blueish glow surrounding it, indicating DART’s impact with the asteroid.

According to NASA, Webb captured the impact over a span of five hours and took a total of 10 images.

Hubble’s footage looks bright red and plumes of material appear to emanate from the center, again, indicating a direct impact.

NASA pieced together 45 photos captured by the Hubble telescope, spanning between just before impact and five hours after DART crashed into the targeted asteroid.

"I have nothing but tremendous admiration for the Webb Mission Operations folks that made this a reality," said principal investigator Cristina Thomas of Northern Arizona University in Flagstaff, Arizona. "We have been planning these observations for years, then in detail for weeks, and I’m tremendously happy this has come to fruition."

On Monday, Sept. 26, NASA’s DART appeared to successfully execute its mission by intentionally crashing into an asteroid.

"As far as we can tell, our first planetary defense test was a success," Mission Control's Elena Adams later told a news conference, the room filling with applause. "I think Earthlings should sleep better. Definitely, I will."

The mission is key to NASA’s goal of developing technology that could one day prevent a killer asteroid from striking Earth.

The size of a small vending machine at 1,260 pounds (570 kilograms), the spacecraft slammed into roughly 11 billion pounds (5 billion kilograms) of asteroid at 14,000 mph.

Dimorphos, the asteroid involved in Monday’s test, did not pose a threat to Earth but was the perfect test subject for DART’s mission, NASA said.

Dimorphos is actually the puny sidekick of a 2,500-foot (780-meter) asteroid named Didymos, Greek for twin. Discovered in 1996, Didymos is spinning so fast that scientists believe it flung off material that eventually formed a moonlet. Dimorphos — roughly 525 feet (160 meters) across — orbited its parent body at a distance of less than a mile (1.2 kilometers).

The results of Monday’s mission won’t be known for a few weeks.

The Hubble telescope will continue to monitor the Didymos-Dimorphos system 10 more times over the next three weeks, NASA said.

"When I saw the data, I was literally speechless, stunned by the amazing detail of the ejecta that Hubble captured," said Jian-Yang Li of the Planetary Science Institute in Tucson, Arizona, who led the Hubble observations. "I feel lucky to witness this moment and be part of the team that made this happen."

The Associated Press and Kelly Hayes contributed to this report. This story was reported from Los Angeles.