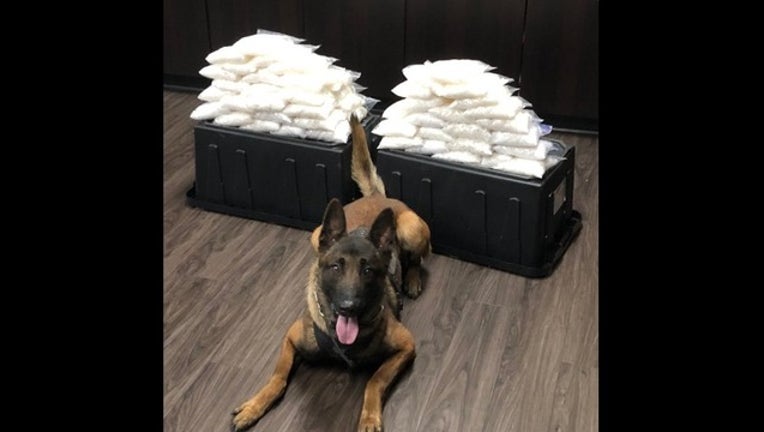 The West Covina Police Department's newest K-9 helped them find 60 pounds of methamphetamine inside a vehicle during a traffic stop.

West Covina officers conducted a traffic stop on a Silver 2010 Nissan Rogue for a vehicle code violation in the area of Vincent Ave and the Interstate 10 Freeway in West Covina. During the course of the stop, methamphetamine was located under the driver's seat of the vehicle. The driver was detained and a narcotic detection K-9 was summoned to the scene. K-9 Rye alerted on the vehicle, leading the officers to believe there was additional methamphetamine in the vehicle.

The vehicle was impounded and brought back to the police station where additional methamphetamine was located in two hidden compartments, one under the driver's seat and one under the front passenger seat. The suspect, identified as 28-year-old Pedro Lopez of Paramount, was arrested and booked for possession of methamphetamine for sale and transporting narcotics in a hidden compartment. Bail was set at $1,000,000.

The total weight of methamphetamine was approximately 60 lbs. K-9 Rye is the departments newest K-9, and was field certified in narcotic detection in April 2018.

This is Rye's first narcotic detection since being field certified!