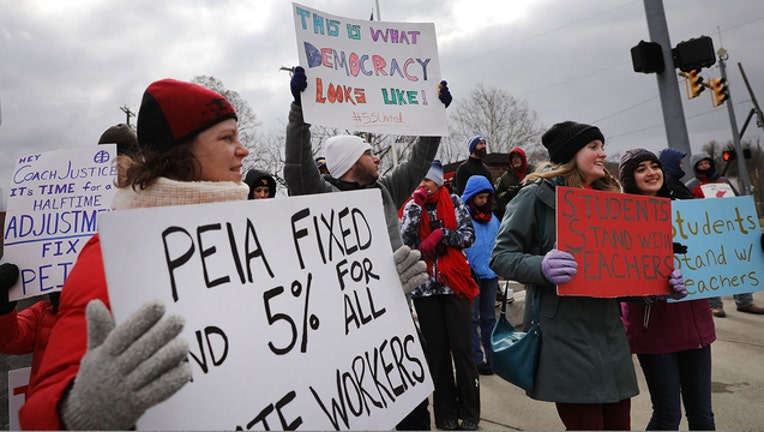 West Virginia teachers, students and supporters hold signs on a Morgantown street as they continue their strike on March 2, 2018 in Morgantown, West Virginia. (Photo by Spencer Platt/Getty Images)

CHARLESTON, W.Va. - (AP) — West Virginia lawmakers unanimously approved 5 percent pay raises for teachers and troopers on Tuesday after the governor reached a deal to end a teacher walkout that shuttered the state's schools for nine days.

A huge group of teachers crowding the Capitol's hallways cheered their victory.

With striking teachers looking on, the House of Delegates passed the pay raise for teachers, school service personnel and state troopers on a 99-0 vote, and the Senate followed, voting 34-0.

"I believe in you and I love our kids," Gov. Jim Justice said.

The governor, union leaders and the House had agreed to the raise for those groups last week. State teachers are among the lowest paid in the nation and haven't had a salary increase in four years.

But the Senate refused to go along, approving a 4 percent increase Saturday. The six-member conference committee then agreed to the 5 percent figure Tuesday, and for more than just teachers.

Senate Finance Chairman Craig Blair said to pay for the raises, lawmakers will seek to cut state spending by $20 million, taking funds from general government services and Medicaid. Other state workers who also would get 5 percent raises under the deal will have to wait for a budget bill to pass.

"The winners in this are the students of West Virginia and the educators across West Virginia who finally see a true investment in education," West Virginia Education Association President Dale Lee said.

Union spokeswoman Kym Randolph said before the votes that teachers could return to work Wednesday if lawmakers act quickly.

"These are deep cuts," Blair said. "This has been the fiscally responsible thing to do, in my opinion, to get us to the point we're at today."

Justice said additional budget cuts by his staff will fund the raises. Blair said that if the governor's estimates of increased revenue estimates from Justice come to fruition, supplemental appropriations could take place.

"This is very positive," said Tina Workman, a second-grade teacher from Midland Trail Elementary in Kanawha County who has been at the Capitol each day with other striking teachers. "We are surprised, but we aren't putting all of our eggs from the chickens in one basket. We want it signed, sealed and delivered. Because seven days ago we were told the same thing, and we're still here."

A show of support by thousands of teachers and supporters on Monday didn't sway lawmakers in time to avoid a ninth day of cancelled classes for the school system's 277,000 students and 35,000 employees.

Ferns said late Monday after a House-Senate conference committee worked for a compromise that Senate Republicans were concerned more about how the raise is paid for than the exact amount.

Blair, R-Berkeley, and Ferns hade been skeptical about the legitimacy of revised, higher revenue figures Justice cited to support the higher pay raises. Blair suggested at one point that schools reopen while the Legislature tries to work on the bills, prompting groans from the audience.

The Capitol was briefly closed as well on Monday after 5,000 people entered the building, posing security concerns. It was reopened an hour later, and teachers vented their frustration over the lack of progress. Their strike, in one of the poorest states in the country, has disrupted lives across the state, forcing working parents to scramble for child care and putting children who rely on meals at school at risk of going hungry.

With 17.9 percent of West Virginians living below official poverty levels, teachers, bus drivers and other volunteers are collecting food for students who rely on free breakfasts and lunches. Teachers also are sharing stories of donating their time, money or food. At least two GoFundMe pages have been launched in support of the walkout.

"It does make you feel good because we are helping them," said Ann Osburn, a special education teacher at Buckhannon Academy. "I think we're reaching as many as we can."

Rachel Stringer, a stay-at-home mom from Cross Lanes, said her biggest challenge is making sure her children don't forget what they've learned this school year. Despite the long layoff, Stringer supports the teachers.

The teacher walkout over pay and benefits began on Feb. 22 after the governor signed a 2 percent pay raise for next year. He reconsidered after an initial round of protests, and the House of Delegates later approved a 5 percent increase. The Senate's insistence on a 4 percent raise Saturday prompted the union to extend the strike.