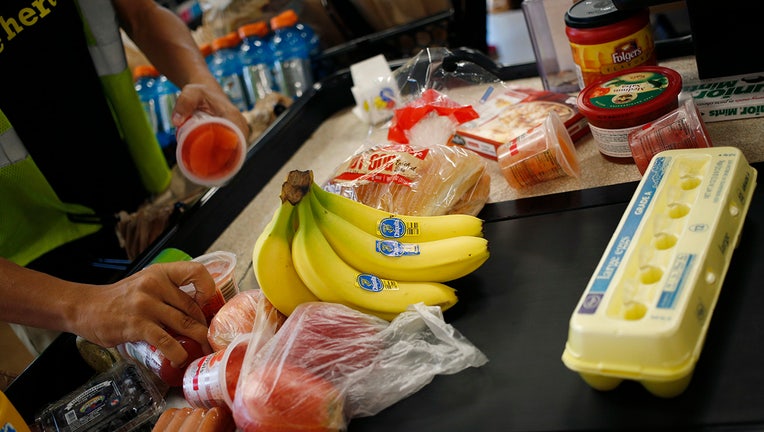 File: An employee bags groceries for a customer at a checkout counter inside a Kroger Co. grocery store in Louisville, Kentucky, U.S., on Wednesday, June 14, 2017. (Luke Sharrett/Bloomberg via Getty Images)

After years of debate, Kansas is moving towards phasing out its sales tax on groceries over the next few years.

It’s a move that could save taxpayers about $740 million over three years; a family spending $200 a week on groceries would save $208 in 2023. Now, with the price of groceries skyrocketing and inflation at an all-time high, lawmakers in other states are considering whether to do the same.

Of the 45 states that levy sales taxes, only 13 states charge any sales tax on groceries. That includes Kansas, where the current 6.5% rate is second only to Mississippi’s 7%. Among the 13 states that tax groceries, only Alabama, Mississippi and South Dakota charge their full sales tax rate, according to the Tax Policy Center.

Alaska, Delaware, Montana, New Hampshire and Oregon are the only states in America that don’t charge sales taxes at all. In 38 states, local sales taxes are charged on top of state sales taxes, and in some cases the local tax is higher than the state rate, according to the Tax Foundation.

Here are the 13 states that charge sales tax on groceries:

What’s the new sales tax rate on groceries in Kansas?

In Kansas, Democrats were trying to have the whole tax eliminated on July 1, but Republicans came up with their own schedule. The Republican plan, which Democratic Gov. Laura Kelly promised to sign, phases out the tax over three years, dropping it from 6.5% to 4% in January 2023, to 2% in 2024 and zero in 2025.

The tax cut would apply to unprepared food, not most prepared foods. It would also apply to bottled water, candy, dietary supplements, soft drinks and vending machine food.

RELATED: Lawmakers call to end gas taxes across US amid price surge

The Associated Press contributed to this report. This story was reported from Seattle.