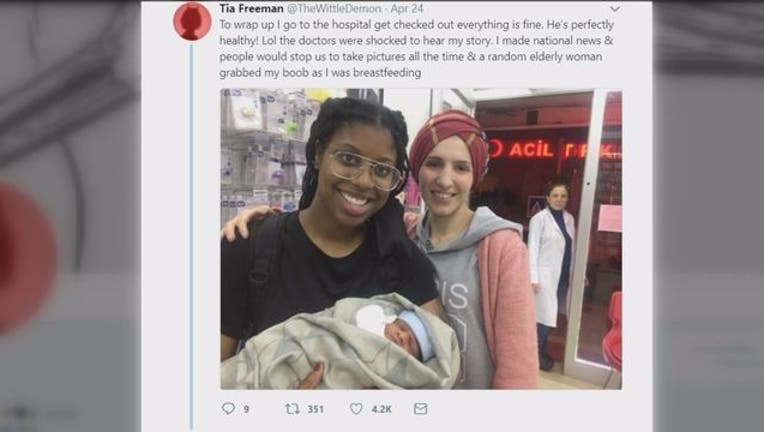 Imagine being pregnant and experiencing contractions on an overseas plane ride that's taking you to your vacation destination. All the while you're alone, can't speak the native language and have no one to help you!

In a series of viral tweets,Tia Freeman shared the incredible story of how she went into labor during a layover and had only YouTube, shoelaces and knives to help deliver her baby!

Freeman found out she was six months pregnant back in January. And in case you're wondering how she didn't know for so long, there's a tweet to go with that!

Freeman went on to explain how she doesn't have a regular menstrual cycle due to the birth control she's on.

"So not having a period wasn’t an indicator for me. On top of that I didnt really gain any weight."

Needless to say, that was not stopping the 22-year-old US Air Force computer specialist from enjoying a much needed vacation-- which she already had preplanned. Expecting the baby to come on time, she thought she'd be good. Well she thought wrong!

Because while she was traveling from the U.S. to Germany, with a 17 hour layover in Turkey, Freeman began experiencing contractions!

"I’m literally gripping the railing trying to make it through the lines. At this point I feel like I’m about to pass out. I’m sweating. I feel like I have to vomit. I’m going through it."

So what does she do? In true millennial form, she googles it-- duh!

Adamant about not having her baby at the airport, Freeman gathers herself and is able to make it to her hotel room.

"So I’m in a foreign country, where no one speaks English, I don’t know this country’s emergency number, & I have no clue what to do."

And we all know when Google fails (which is almost never) YouTube prevails!

"If no one else had my back the internet would," tweeted Freeman.

She began preparing for a water birth by filling up a tub with warm water, grabbing a towel to bite down on and grabbing another to wrap the baby in.

"It’s weird how focused a person becomes when they’re adrenaline starts going. Because at no point ever did I freak out. Like I just did what I had to do."

And just like that, it's game time! Thanks to the internet, Freeman found a comfortable position (because there are many) to birth the baby. And noted to only start pushing until her contractions were two minutes apart-- otherwise she'd exhaust herself too early and not have enough energy when the baby came.

"So anyway. I strip down and climb in the tub. The internet said there were a couple positions that people find the most comfortable. I picked the one that worked for me and I was like okay BOOM let’s birthed this baby."

Did we mention her contractions were already one minute apart as she assembled everything?!

"And I have NEVVVVEEERRRR felt any pain like this in my life. I felt like I was being split open. WHERE WAS MY EPIDURAL?!"

And with just a few pushes, the baby was out!

"That little joker said bloop and floated right on up to the top of the water."

Catching her breath, Freeman picked up the baby and discovered it was a boy! But the story didn't end there because now she has this newborn baby and still needs to drop the placenta.

"So finally it feels like I’m having another contraction and I assume this is the placenta ready to drop it like it’s hot. So I shuffle to the bathroom and sit down on the toilet because idk where else to go."

With the placenta out but the baby still attached to his umbilical cord, and with no supplies to properly cut it, Freeman got crafty with a pair of shoelaces (which were sterilized) and knives.

"Okay so it’s been a second so I may be a little iffy on the exact details but it went something like this. You’re supposed to measure off like 2inches from the stomach and tie one lace and then tie the other inch another inch from there. Now you cut the cord in between."

Exhausted, nervous and still in shock, the new mother managed to successfully cut the baby's cord! After cleaning the bathroom, Freeman decided the best bet to obtaining answers on how to leave the country with her newborn is by visiting the airport.

"When I get there the airport workers are freaking out bc you can tell this baby is fresh. I legit didn’t have any baby clothes & made him something out of my favorite blue oversized button down (RIP 😢). Anyway they thought I was a human trafficker trying to smuggle out a baby."

"So they called in customs, the police, a doctor & a nurse (to check the baby & me to see if I actually gave birth), and the airline higher ups. I was bombarded with questions (naturally) but finally I proved that I wasn’t a trafficker. During this I called the @USEmbassyTurkey."

After an intense integration, Freeman went on to say that someone knocked on the door of the room she's in and was told, "they want to take your picture."

"Idk how they found out but someone tipped them off to my story and they had all the questions lol. If you google my name and Istanbul Turkey articles will pop up. It’s all in Turkish though so good luck with that lol."

A shuttle ride to the US Consulate and a birth certificate and passport later, Freeman is taken to the hospital-- all while being surrounded by media! She goes on to say that doctors were shocked to hear the delivery story and reported that the baby was healthy!

The cherry on top was how she said no one, not even her mother, knew she had the baby! So the story, which at this point had made national headlines, was a shocker to all her friends and family.

But most importantly, the baby arrived home safely. She named him Xavier Ata Freeman-- giving him a Turkish middle name!

"Here he is Xavier Ata Freeman born March 7, 2018 in Istanbul, Turkey! My little surprise bundle of international joy! (His middle name is Turkish)."

Congrats, Tia Freeman! You did that girl.