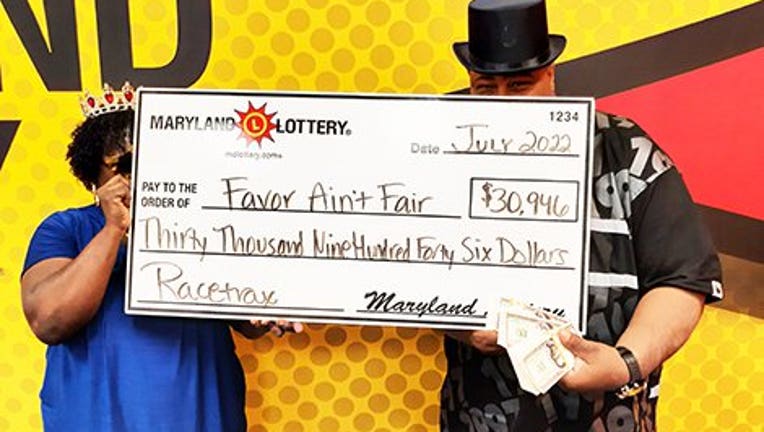 Racetrax "longshots" brought this Hyattsville woman and her husband back to the Winner’s Circle to claim a second $30,946 prize. (Image: Maryland Lottery)

A Maryland woman has hit her lucky streak.

The 51-year-old from Hyattsville won another $30,000 playing the same Racetrax horses numbers she played just earlier this year.

In May, the specialist at a rehabilitation facility won $30,936 playing her favorite 11, 10 and 12 combination. She picked the numbers of the computer-animated horses because they had the least chances of winning.

And now the horses have beaten the odds for her — twice.

The woman, who wasn’t named publicly but identified herself with the phrase "Favor Ain’t Fair," said she just had a "feeling" on Tuesday, July 12, one so strong that she went to buy a ticket on her lunch break with the same combination.

She said the cashier initially got her numbers out of order. But she corrected him and the numbers must have stuck in his mind — because he was the one that called out to her that her winning horses had come in.

She won the exact same prize as she did in May, down to the dollar amount.

She and her husband have been in the market for a new home.

"This win will make our down payment a little more impressive," Favor Ain’t Fair said.