A gorilla was recorded chasing after a stray dog that managed to enter its enclosure at the San Diego Zoo Safari Park in Escondido, California, on June 12. (Credit: Desteniey Pickett via Storyful)

Staff at the San Diego Zoo safely removed a dog that became trapped in an enclosure with gorillas on Sunday.

The dog, identified as a male shepherd, reportedly entered the enclosure of its own accord. A gorilla soon spotted the dog and chased it, however, leading visitors to start yelling the gorilla's name in an attempt to distract it, according to local news media.

Staff with the San Diego Human Society soon intervened, removing the gorillas and rescuing the dog.

"As soon as zoo staff saw the dog, they moved the gorillas out," the SD Humane Society said in a statement. 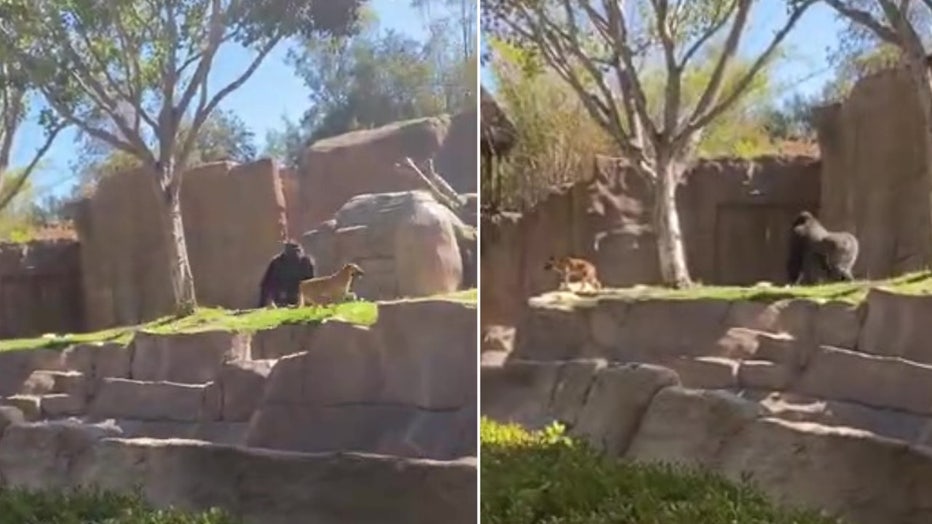 A gorilla chases after a dog in a San Diego zoo after the dog accidentally got trapped in an enclosure.

The dog, which did not have a microchip, is now being held so the owner can be identified.

GRANDFATHER FORCED TO FIGHT KANGAROO THAT ATTACKED HIS DOGS

"Our Humane Officers were able to move in and safely leash the shepherd and bring him back to our Escondido Campus for evaluation," it continued.

The incident comes days after an orangutan grabbed a visitor through its cage at a zoo in Indonesia.

Footage shows the animal snatching at a visitor's shirt, triggering a scuffle where the man tries to escape the animal's grasp.

The incident reportedly took place at the Kasang Kulim Zoo in the Indonesian province of Riau.

Storyful contributed to this report. Read more on FOX News.