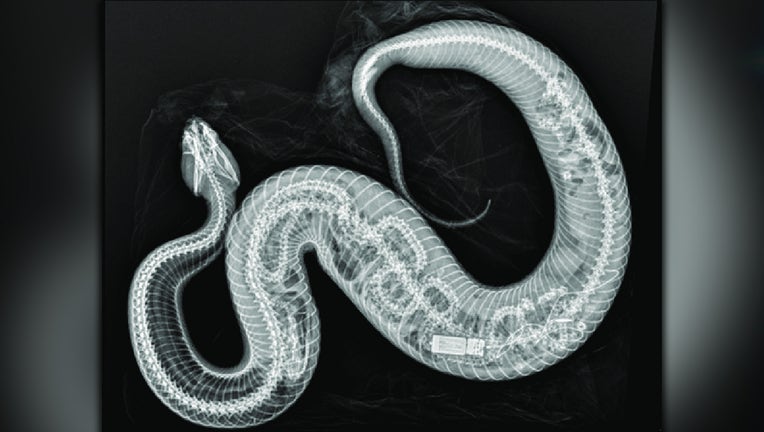 X-ray of native Florida cottonmouth snake that had eaten an invasive Burmese python -- which was being tracked with a radio transmitter by researchers. (Photo: Zoo Miami)

MIAMI - Zoologists in South Florida made an incredible discovery when they went looking for an invasive python they had been tracking with a transmitter — only to find it had been eaten by a native cottonmouth snake.

Zoo Miami posted a photo of the snake along with an X-ray showing its meal on its Facebook page, saying the native cottonmouth was "fighting back" against the invasive pythons that have been wreaking havoc in the Florida Everglades.

"A python that had its tracking transmitter implanted by surgeons at Zoo Miami was recently found to be consumed by another snake; a native cottonmouth, also known as a water moccasin," the zoo wrote in its caption. "You can see the spine and the transmitter of the python inside the cottonmouth on this x-ray, or radiograph, that was taken at Zoo Miami's animal hospital."

RELATED: Emotional support alligator is up for 'America's Favorite Pet'

Researchers had been tracking the Burmese python, but had recently been unable to find it until they found it inside the slightly larger cottonmouth. 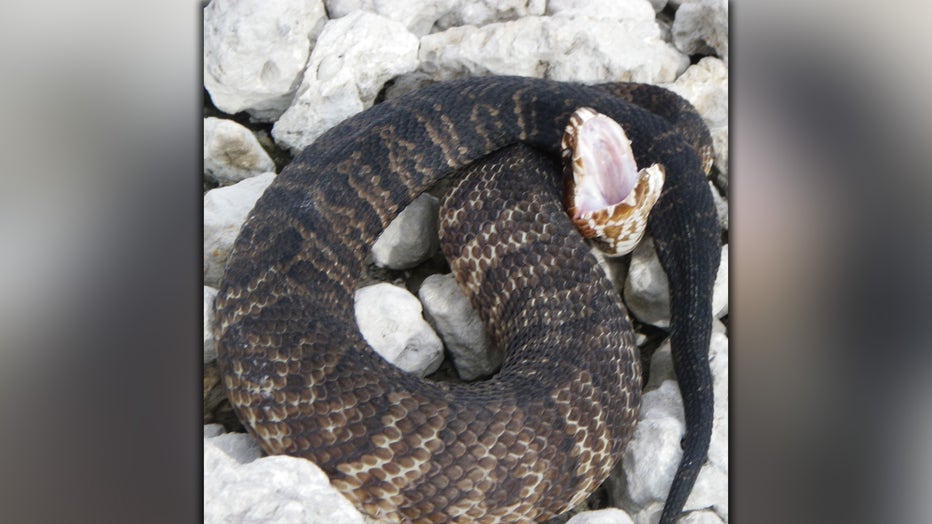 Native cottonmouth snake that had eaten an invasive Burmese python, which was implanted with a tracking device. (Photo: Zoo Miami)

The X-ray image showed the 43-inch native cottonmouth snake had consumed the 39-inch python, which in turn had the electronic radio transmitter that had been surgically implanted inside of it before being eaten.

The X-ray shows the tail of the Burmese snake was consumed first, according to researchers, with the curving spine of the python stretched out inside the engorged cottonmouth.

Researchers wrote that they continued to regularly track the native snake until it expelled the transmitter on its own approximately 25 days later.