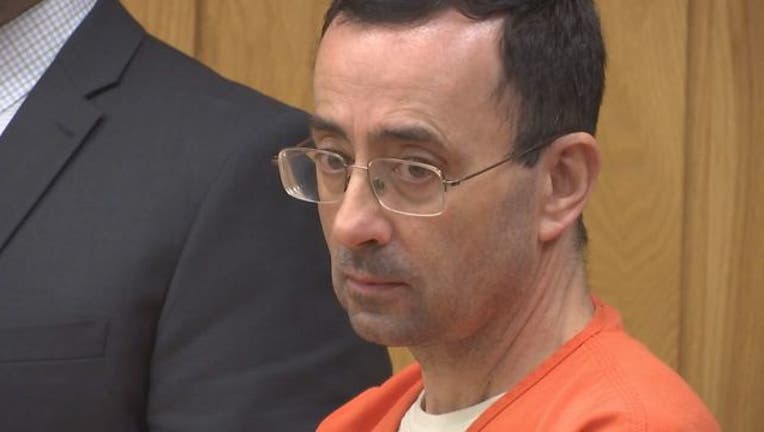 DETROIT (AP) - The $500 million settlement between Michigan State University and hundreds of Larry Nassar's victims will be divided up after weighing many factors, including the date and victim's age when the sexual assaults occurred and the impact it had on their lives, lawyers say.

The school, where the sports doctor worked for nearly 20 years, announced Wednesday that it would set aside $425 million for 332 women and girls who say Nassar abused them and another $75 million to cover future claims. But it won't have a role in determining how much each victim will receive.

That will likely fall to one or two former judges or experienced mediators who will be selected by lawyers to oversee the process, said John Manly, who represents roughly 200 victims in the worst sexual abuse case in sports history.

"This can be wrapped up in four or five months," he predicted.

Simple math says $425 million divided by 332 people would be $1.28 million each. But it's not "share and share alike," said attorney David Mittleman, whose Lansing-area firm represents 111 victims.

Indeed, claims must be evaluated in many ways. Manly said some people could receive "substantially" more than $1.28 million while others get much less. Attorneys will also get a share of any award under agreements they have with clients.

"The age of the abuse, the duration of the abuse," Manly said, listing the likely factors. "Treatment in the future and the past. Have you lost earnings? Are there things about a particular case that are aggravating or mitigating."

Mittleman said the dates of the assaults will be important. Older abuse probably will be worth less because without the settlement, Michigan State could have been shielded by a statute of limitations.

New York attorney Michael Barasch is not involved in the Nassar case but has represented hundreds of victims sexually abused by New York priests. He said a pool of money is "definitely the way to go."

"You've got to have a sensible, systematic and transparent solution," Barasch said. "Who better than a fair mediator accepted by everybody? ... Some of these people are going to be disappointed - guaranteed. But I can tell you from my church abuse cases, the vast majority are so appreciative of having finality."

Michigan State was accused of ignoring or dismissing complaints about Nassar, some as far back as the 1990s. The school had insisted that no one covered up assaults, although Nassar's boss was later charged with failing to properly supervise him and committing his own sexual misconduct.

In a statement Thursday, his first since the settlement, Michigan State President John Engler apologized, calling Nassar an "evil doctor" whose assaults "shocked our campus and the nation." The former Michigan governor was hired as interim leader after Lou Anna Simon's sudden resignation in January.

Michigan State hasn't disclosed how it will pay for the settlement besides leaning on insurance companies. Engler told reporters in Lansing on Thursday that he doesn't plan to ask state lawmakers for money.

Nassar, 54, will be locked up for the rest of his life under three decades-long sentences for molesting athletes with his hands and possessing child pornography. He's at a federal prison in Arizona.

In addition to working at Michigan State, Nassar worked with Indianapolis-based USA Gymnastics, which trains U.S. Olympians. His assaults were mostly committed in Michigan at his Lansing-area home, campus clinic and area gyms, but his accusers also said he molested them at a gymnastics-training ranch in Texas and at national and international competitions.

The settlement applies only to Michigan State. Lawsuits are still pending against USA Gymnastics, the U.S. Olympic Committee and an elite gymnastics club in the Lansing-area.