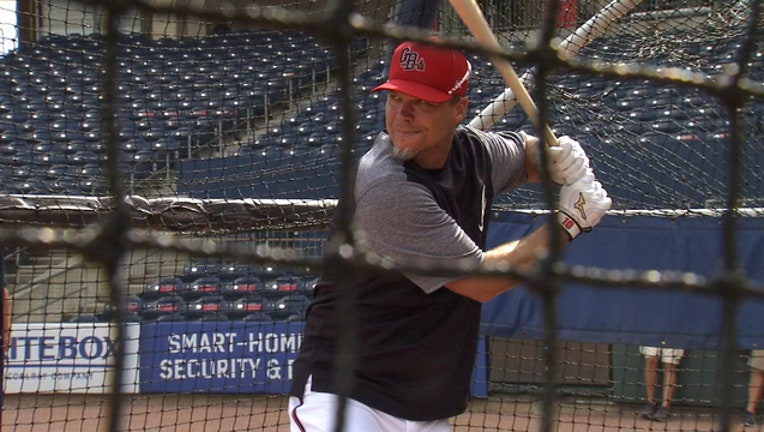 ATLANTA (AP) - When Chipper Jones took stock of all of the familiar names he's on the cusp of rejoining, he wondered if it might be time to expand the Baseball Hall of Fame.

"We need to see if we can erect our own room in Cooperstown," Jones quipped, flashing that dry sense of humor he was known for during his playing days.

It was announced Wednesday that Jones would become the latest member of those great Atlanta Braves teams of the 1990s and early 2000s to enter the Hall when the inductees are revealed on Wednesday.

A third baseman who played his entire 19-year career in Atlanta, Jones appeared early to be a given into the Hall of Fame based on a tracking of ballots that show his support running at more than 98 percent, well above the 75 percent threshold.

Jones always had a real appreciation for the history of the game and all the greats who came before him, which would make getting into the Hall even more poignant.

His father idolized Mickey Mantle, so he pushed young Chipper to become a switch-hitter. Jones wound up batting above .300 from both sides of the plate - an accomplishment that eluded even the Mick.

"I didn't play the game for money," Jones told The Associated Press in a recent interview. "I never saw a pay stub my entire time in professional baseball. I didn't care. I didn't have to be the highest-paid player. Trust me, I was more than happy with what I got."

Indeed, while he made about $177 million during his career, Jones never really came close to becoming a free agent. He wasn't interested in seeing what he could bring on the open market. He was content to remain with the Braves, always cognizant of how good he had it.

Jones broke into the lineup in 1995, helping win a fourth straight division title and what would be Atlanta's only World Series championship during this run. There were 10 more division titles in the unprecedented streak, which finally ended in 2006. Jones would play on two more playoff teams, then retired after the 2012 season, giving him 13 postseason appearances in all.

Only twice in his career did the Braves have a losing record.

"Man, it was a good marriage," Jones said. "I was a big Dodgers fan growing up, but I never really thought about wanting to put on a Dodgers uniform. I never thought about playing in the big city lights of New York or wonder what it would be like to be a Yankee. I was a Brave."

The Braves were one of baseball's worst teams when they drafted Jones with the No. 1 overall pick in 1990. Pitcher Todd Van Poppel was considered the top prospect that year, but many teams - Atlanta included - backed off when the right-hander vowed to attend college.

Turns out, Van Poppel did sign with the Oakland Athletics after they grabbed him with the 13th pick. But the Braves never had any second thoughts about their selection.

Jones became the face of a franchise.

Of course, there are some regrets about all the postseason heartbreak - especially the 1996 World Series, when the Braves seemed a lock to capture their second straight championship.

"We win the first two at Yankee Stadium," Jones said, by a combined score of 16-1, no less. "Riding home on the plane, I'm thinking to myself, 'Two years in the big leagues, two World Series rings.' I counted my chickens before they hatched. As baseball normally does, it came back to humble me."

The Braves lost the next four games - three in Atlanta - and never came so close again to a championship.

In the only other Series appearances of Jones' career, the Braves were swept by the Yankees in 1999. Nine more times, Atlanta was eliminated in an NL Division Series or Championship Series. And in his final game, the Braves lost to St. Louis in baseball's first wild-card playoff , with Jones making a crucial throwing error and fans littering the field with garbage after a disputed infield-fly call.

"To say we left at least one or two out there is not an understatement," he said ruefully.

In retirement, Jones and others wondered how he would fare without a game that was such a big part of his life.

The 45-year-old married for a third time in 2015 and now has six children, all boys, the youngest of whom turned 1 a couple of weeks ago. He plays golf regularly and gets paid to pursue another passion on his weekly Sportsman Channel show "Major League Bowhunter ." He has attended spring training as a guest instructor of the Braves but has shown no real desire to get back into the game full time.

"Nobody was more shocked than I was," Jones said. "I thought they would have to rip the uniform off me."

While content with life after baseball, he is looking forward for a reunion this summer in Cooperstown.

With Maddux and Glavine and Smoltz .

With Cox and Schuerholz .

"Hopefully," Jones said, "this will come to fruition and we'll all be back together again in one big group. That would be pretty cool."