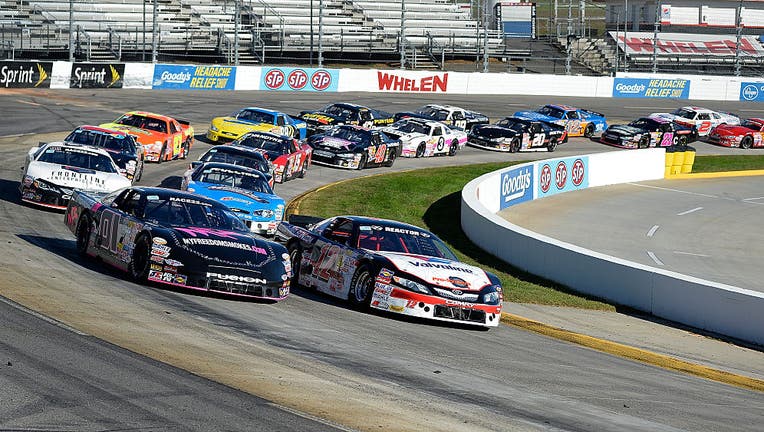 MARTINSVILLE, VA - OCTOBER 11: Timothy Peters, driver of the #12 Toyota, leads the field to the green flag during the NASCAR Whelen All-American Series ValleyStar Credit Union 300 at Martinsville Speedway on October 11, 2015 in Martinsville, Virginia

Two late model stock car drivers got into an altercation on Saturday afternoon after a crash during the qualifying races at Martinsville Speedway in Virginia for the ValleyStar Credit Union 300.

Video from Heat 1 showed Andrew Grady at the driver’s side window of Davey Callihan. Grady appeared to be yelling about something and started to throw haymakers at Callihan, who was still buckled into his car. Grady then added a kick for good measure and had to be picked up and carried out of the situation.

Grady said he had an issue with the way Callihan was driving and that Callihan wrecked him and another competitor, Brandon Pierce.

"He flipped me off, so I started Mike Tyson-ing his head," Grady told reporters after the incident, according to Racing America. "And of the day, we were really, really good. Car was fast. But you get these dumba--es that come in here and run with us and they have no business running a late model much less a lawn mower.

"He wasn’t close. He dive-bombed me. He hooked me. He wrecked Brandon Pierce in the process. I wanted to talk to him but he flipped me off. So, I started Mike Tyson-ing his head. I mean, you’re in a big boy sport when you wreck a man, you can take a grown man a-- whooping. That’s how I feel."

Callihan defended his move, saying he was in a position to get into the feature race.

"It was for a transfer position at Martinsville. From my perspective, I was there. It was close," he told Racing America. "But you can't give an inch for the transfer spot when there's 95 cars and I had to take it."

The late model stock race was a part of the NASCAR Roots series. Peyton Sellers would win the race.