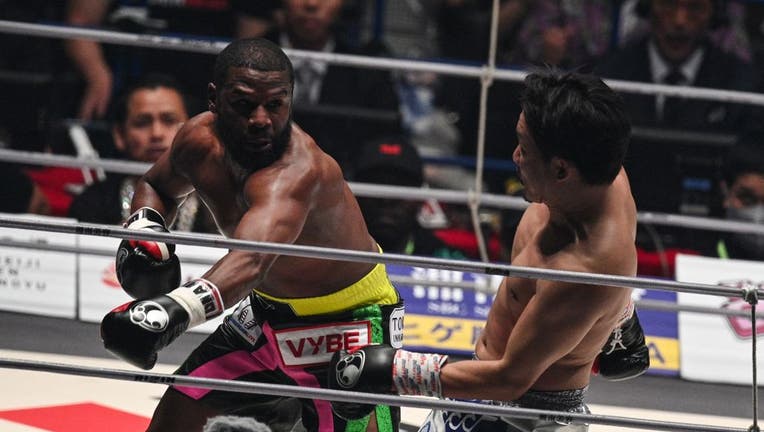 US boxer Floyd Mayweather (L) fights against Japanese mixed martial artist Mikuru Asakura during their exhibition boxing match at the Saitama Super Arena in Saitama on September 25, 2022. (Photo by Philip FONG / AFP) (Photo by PHILIP FONG/AFP via Get

Floyd Mayweather Jr. took care of business in an exhibition bout on Saturday night in Japan.

"I don’t remember what hit," Asakura said after the fight. "I have a huge headache."

The match took place at Saitama Super Arena, north of Tokyo. The fight was a collaboration between Mayweather Promotions and Japan’s Rizin Fighting Federations. The bout was set to end after three rounds.

Mayweather hasn’t fought in a professional boxing match since the spectacle against Conor McGregor in 2017. While there’s been rumors of a potential fight with McGregor or Manny Pacquiao again, Mayweather maintained after the Askakura fight he would continue to only do exhibitions.

"I retired from the sport, I didn't let the sport retire me… I'm not going to take punishment to the point where I can barely walk and barely talk," Mayweather said Sunday.

Mayweather said he wanted to do more collaborations with Rizin and bring some exhibition bouts to the U.S. He has another exhibition set for Dubai later this year.

Mayweather’s last exhibition in Japan came in 2019. He knocked out Tenshin Nasukawa in the first round.

The Associated Press contributed to this report. Read more of this story from FOX News.