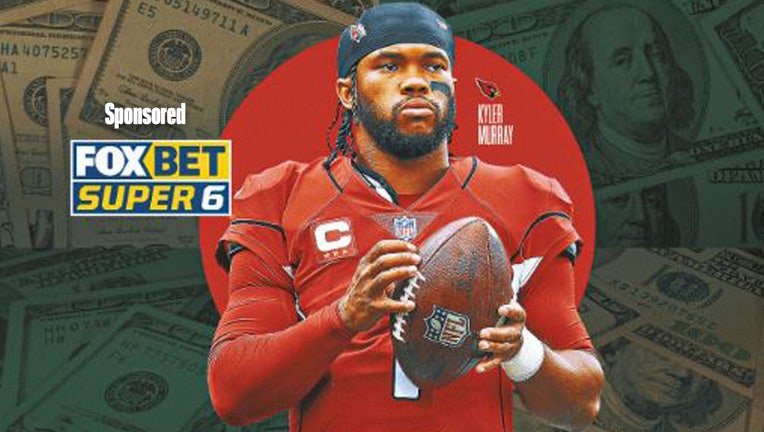 Oh, what fun it is to ... win! And that's exactly what three lucky people did as they won $1 million of Terry Bradshaw's money in last week's FOX Bet Super 6 NFL Sunday Challenge.

A million dollars is a pretty nice chunk of change. As a matter of fact, it's the amount of money people often fantasize about having. "If only I had a million dollars ..."

Well, three very lucky football fans got to split a seven-figure jackpot worth a cool mil after winning the Week 4 contest.

Out of almost 800,000 NFL Sunday Challenge entries in the app, the three contestants were the only ones to perfectly predict the six outcomes of the Super 6 marquee matchups. The winners are from Minnesota, Arizona and California, and each will pocket approximately $333,333 in winnings (pending verification).

Scoring that much cash during Sunday football is a call that looks good from every angle.

So what does it feel like to be one of the lucky ones who gets a piece of the pie? We caught up with a couple of our winners to find out.

Allison from California lives in an equal-opportunity household when it comes to NFL fandom. She, her husband and their five children cheer for the Raiders, the hometown Chargers and the Seahawks.

"We cheer for the Raiders because I have a former student who now works for them. And the Seahawks — we've always loved them as a family," she said. "When it comes to the Chargers, they're a local team. And we sometimes see some Chargers players at the doctor we go to."

The mom of five admits that she had tinkered around with the FOX Bet Super 6 contest in the past because she had friends who played. But it wasn't until this year that she got serious about trying her luck.

"I started playing because it was free, it was easy, and it makes watching Sunday football more fun. However, I wasn't sure people really won."

But people really do win. Allison's own winning moment came last Sunday during the Cardinals-Panthers game. But before the grand finale, she kept up with her progress throughout the day. 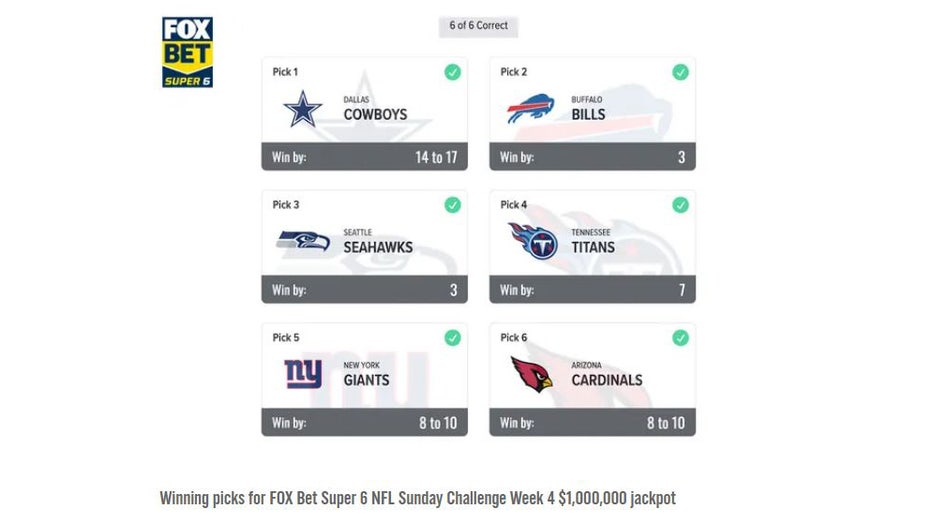 But as the Cardinals were en route to defeating the Panthers 26-16, cementing her as a winner, Allison had to tune into those final moments from her iPhone.

"And I was in disbelief. I was just staring at the app in shock. I'm not someone who knows players' stats. I'm just a mom, and I won!"

When it comes to knowing football, Allison considers herself an average Joe.

"I don't do any research. I always pick the Seahawks. I picked the Cowboys because we have a close family friend who passed and was a Cowboys fan.

"To be honest. Most of it is flat-out guessing."

And speaking of guessing, Allison is still figuring out what she'll do with her money.

"We'll use some for upgrades on the house, and we'll put some away for the kids' college funds."

But one thing she knows for sure is that she'll be playing again.

"Why would I not keep playing? It's free, so nothing's lost if you don't win. Either way, you have fun while doing it."

Heather from Minnesota was another winner we caught up with. Like Allison, she plans on putting some of her prize money toward finishing up home renovations. But unlike our winner from the West coast, this mom from Minnesota had never played a Super 6 contest until she hit it big this past Sunday.

Heather's oldest son who's in college introduced the FOX Bet Super 6 contest to her. And because she and her family are huge sports fans, it was easy for her to get in on the fun.

Since fun and money are the current themes, we've got a few special picks for you as we look ahead to NFL Week 5.

FOX Bet Super 6 is a free-to-play contest where users choose the winners and the margins of victories for six games. Get all the picks right and cha-ching. In addition to playing NFL Sunday Challenge, fans can try their hand at College Football Pick 6, the Big Noon Saturday challenge and other weekly contests.

Terry's jackpot is $100,000 this week, so in addition to our predictions, Allison and Heather are providing theirs, too.

If you're ready to play like a millionaire for this week's 100 grand, check out all the picks below.

Seahawks @ Saints (1 p.m. ET Sunday, FOX)
We are long-time fans of the Seahawks, and I think they may have some momentum after winning last week.
Prediction: Seahawks by 7 points

Bears @ Vikings
I always cheer for the Vikings.
Prediction: Vikings by 14 to 17 points

Bears @ Vikings
FOX Bet oddsmakers have the Vikes favored by 7, and that's a spot we like. Minnesota QB Kirk Cousins has thrown a touchdown pass in 34-straight games, and the Vikings are 7-2 in their last nine divisional games.
Prediction: Vikings by 7 points

Seahawks @ Saints
The Seahawks with Geno Smith don't look as bad as we thought, and the Saints with a healthy Jameis Winston don't look as good as many imagined.

Geno's 77.3% completion percentage is the best in the League. The Saints on offense this season have committed an NFL-worst 11 turnovers. Be on the lookout for a Hawks W.
Prediction: Seahawks by 8 to 10 points

Steelers @ Bills
The Steelers won the last matchup between these two in Week 1 of the 2021 season by a score of 23-16. No such luck this year, though.

Buffalo is coming off a 17-point comeback win over the Ravens in Week 4, and the squad is 12-3 in its last 15 regular season home games.

It's all about the Bills, baby.
Prediction: Bills by 6 points

Lions @ Patriots
The Lions are 3-1 against the spread (ATS) this season, so one thing we know they do well is cover.

With Detroit's cover percentage in mind and the Lions sitting at +3 at FOX Bet, we're going to go with the Patriots.

Look for New England to bounce back, but it will be close.
Prediction: Patriots by 1 to 2

Falcons @ Buccaneers
Who would've guessed that in 2022, Marcus Mariota would be leading the Falcons against Tom Brady's Buccaneers and that both squads would be 2-2?

Not even Marty McFly could have figured this one out.

Well, one thing we do know for sure is that, after TB & Co. got embarrassed 41-31 on Sunday Night Football, the Bucs are due for a revenge game.

Watch out, ATL. You're about to feel the wrath of the GOAT.
Prediction: Buccaneers by 8 to 10 points

Cowboys @ Rams
Like the Bucs, the Rams need to save face in a major way after falling 24-9 to the Niners in Monday Night Football.

Matthew Stafford was sacked seven times, and LA didn't score a single touchdown all game. Dallas comes into this matchup with the third-overall scoring defense in the league and with a backup QB in Cooper Rush, who's essentially playing with house money.

We're backing the Boys' backup to get his fifth win and cover in his fifth career start.
Prediction: Cowboys by 3 points

There you have it, folks. The contest is free and fun, and we're begging you to take our (read: Terry's) money!

Now, it's your turn. After you download the app and submit your selections for the upcoming contest, share your picks with us by tagging @FOXSuper6 and @EricaReneeD and use the #EricaSuper6 across all social media platforms.