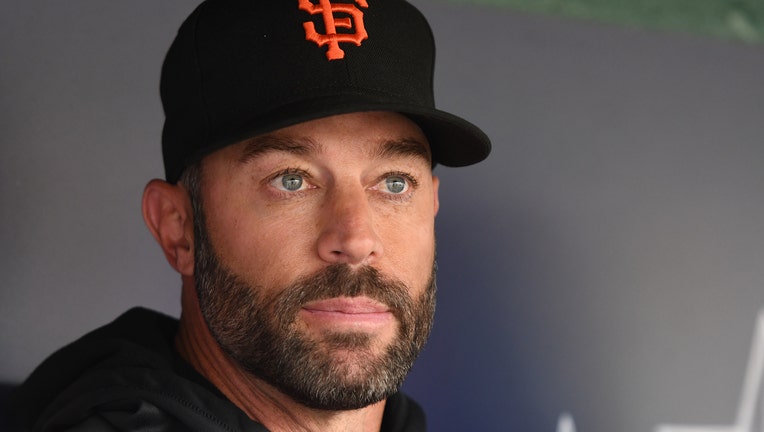 WASHINGTON, DC - APRIL 22: Manager Gabe Kapler #19 of the San Francisco Giants looks on before a baseball game against the Washington Nationals at the Nationals Park on April 22, 2022 in Washington, DC. (Photo by Mitchell Layton/Getty Images)

CINCINNATI (AP) - San Francisco Giants manager Gabe Kapler said Friday he will refuse to take the field for the national anthem in a protest over the nation’s political direction following this week’s school shooting in Texas.

"I don’t plan on coming out for the anthem going forward until I feel better about the direction of our country," Kapler said before a series opener at Cincinnati. "I don’t expect it to move the needle necessarily. It’s just something that I feel strongly enough about to take that step."

Kapler said he needs more time to consider specific actions he might suggest be taken to prevent more tragedies of this type, such as stronger gun control laws.

Kapler said that on the day of the shooting at Robb Elementary School in Uvalde, Texas, "I knew that I was not in my best place mentally and I knew that it was in connection with some of the hypocrisies for the national anthem and how it coincided with the moment of silence and how two things didn’t synch up well for me, but I couldn’t make sense of it in real time and it took me a couple of days to pull all my thoughts together."

Earlier in the day, he used his personal blog to discuss the deaths of the 19 children and two teachers killed in Uvalde.

In a post titled "Home of the Brave, " Kapler wrote: "We elect our politicians to represent our interests. Immediately following this shooting, we were told we needed locked doors and armed teachers. We were given thoughts and prayers. We were told it could have been worse, and we just need love.

"But we weren’t given bravery, and we aren’t free. ... We aren’t free when politicians decide that the lobbyist and gun industries are more important than our children’s freedom to go to school without needing bulletproof backpacks and active shooter drills."

Kapler went on the write: "Every time I place my hand over my heart and remove my hat, I’m participating in a self congratulatory glorification of the only country where these mass shootings take place. On Wednesday, I walked out onto the field, I listened to the announcement as we honored the victims in Uvalde. I bowed my head. I stood for the national anthem. Metallica riffed on City Connect guitars. My brain said drop to a knee; my body didn’t listen. I wanted to walk back inside; instead I froze. I felt like a coward. I didn’t want to call attention to myself. I didn’t want to take away from the victims or their families. ...

"But I am not OK with the state of this country. I wish I hadn’t let my discomfort compromise my integrity. I wish that I could have demonstrated what I learned from my dad, that when you’re dissatisfied with your country, you let it be known through protest."

Kapler has protested during the anthem in the past. In July 2020, before the start of the virus-shortened 60-game season, Kapler joined outfielder Jaylin Davis in taking a knee ahead of an exhibition game against the Oakland Athletics. Davis was making a statement about racial and social issues facing the country.

Fellow outfielders Mike Yastrzemski and Austin Slater also chose to kneel. So did first base coach Antoan Richardson, while shortstop Brandon Crawford stood between Davis and Richardson with a hand on each man’s shoulder.

Kapler’s latest comments came a day after the New York Yankees and Tampa Bay Rays used their social media accounts during the game between the teams to spread information about how gun violence affects American life.