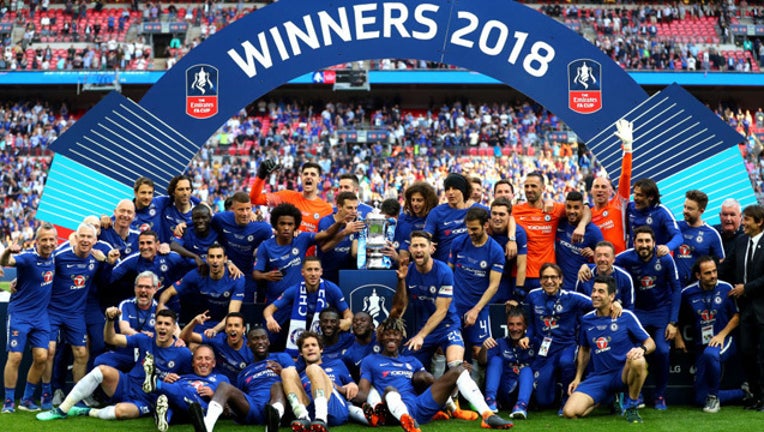 Chelsea players celebrate with the Emirates FA Cup Trophy following their sides victory in The Emirates FA Cup Final between Chelsea and Manchester United at Wembley Stadium on May 19, 2018 in London, England. (Photo by Catherine Ivill/Getty Images)

LONDON (AP) - Eden Hazard ensured Chelsea's lackluster season ended on a high note by securing the FA Cup in a 1-0 victory over Manchester United in the final on Saturday.

Days after raising doubts about his Chelsea future, Hazard netted from the penalty spot in the 22nd minute at Wembley Stadium after being brought down by Phil Jones.

Whether Hazard remains a Chelsea player next season could depend on whether "good players" are signed in the offseason, based on the winger's pre-match comments.

It looks increasingly unlikely Antonio Conte will be the manager overseeing those transfer deals with the departure of the Italian anticipated after two seasons despite delivering silverware.

Victory for Conte - his first in a cup final - meant Jose Mourinho finished his second season at United empty handed, paying the price for an insipid first-half display and coming to life only after the break.

United took until the 56th minute to register a shot on target when Marcus Rashford struck at goalkeeper Thibaut Courtois, who later rushed off his line to block the forward.

United did finish second in the Premier League, the club's highest finish since Alex Ferguson retired as a champion in 2013.