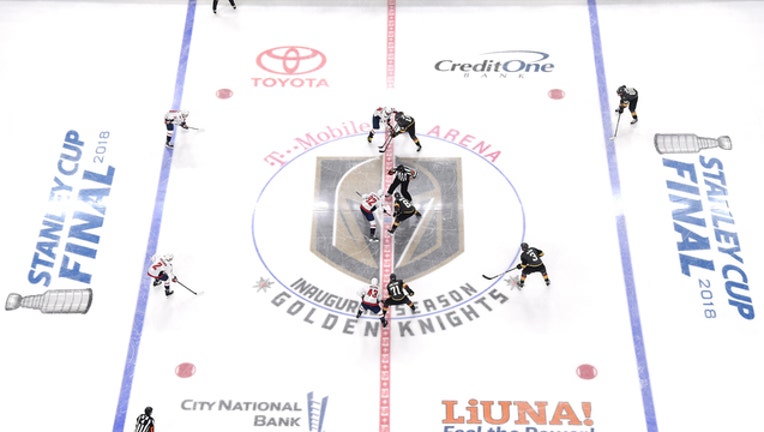 A general view of the ice during the opening faceoff between the Vegas Golden Knights and the Washington Capitals in Game One of the 2018 NHL Stanley Cup Final at T-Mobile Arena on May 28, 2018 in Las Vegas, Nevada.(Photo by Harry How/Getty Images)

The Vegas Golden Knights have shocked the sporting world by playing for a championship in their inaugural season. But their incredible playoff run has taken them straight into summer in the Mojave Desert, where temperatures routinely soar past 100 degrees from May to October.

With sizzling heat outside and a frenzied sellout crowd inside, T-Mobile Arena's ice melted into an inconsistent playing surface for the Golden Knights and the Washington Capitals in the series opener.

Despite constant sprucing from attendants during timeouts, both teams chased the puck through dozens of weird bounces and unpredictable slides while Vegas rallied for a 6-4 victory.

"It was pretty bad," Washington forward Jay Beagle said. "It's so hot outside, so it's not like it's a surprise."

And it's about to get worse: The mercury on the Strip could hit triple digits Wednesday for Game 2, when the league is likely to see its hottest outdoor temperature ever recorded at a Final game.

But before any Canadians develop heatstroke at the prospect of their national game being played in a Nevada swimming pool, players on both teams were eager to make it clear the Vegas ice is absolutely playable.

"It's the same for both teams, which is why it doesn't matter," Vegas forward James Neal said. "It's still the same game for everybody. Of course, everybody would like to play on perfect ice, but that doesn't happen at this time of year."

Middling ice quality can be a fact of life year-round in NHL rinks, particularly for the Sun Belt teams from Anaheim to Miami, yet their players still thrive. It's common to see ice deterioration in rinks at various latitudes when temperatures rise while the NHL playoffs roll through spring.

The Capitals are well aware they won't skate onto a pristine Nordic pond when they return to Capital One Arena for Game 3 on Saturday — not with 85-degree temperatures and 70-percent humidity in the Washington forecast.

"It's probably the time of the year where it's pretty hard to keep the ice fresh," Washington forward Evgeny Kuznetsov said. "But both teams play on the same ice."

Both coaches used the Vegas ice quality to emphasize points in their game plan that would probably be important on any surface. Washington's Barry Trotz and Vegas' Gerard Gallant want a north-south approach with crisp passes, minimal puck-handling and no turnovers.

It's all easier said than done when the puck refuses to behave.

"The pucks were bouncing pretty good," Trotz said. "Unfortunately, the ice wasn't great. There was a lot of chaos."

Dan Craig, the NHL official responsible for masterminding and maintaining the temporary ice sheets at outdoor games across the continent, has been working on the Vegas ice with the in-house crew. The sheet only went down one day before the series opener because T-Mobile had a Pink concert booked Saturday night — again, something that happens in playoff rinks all the time.

Gallant hopes the ice will be more consistent after two more days to set up. Most of the Capitals reported better conditions during practice at T-Mobile on Tuesday — although the arena also wasn't filled with more than 18,575 screaming, sweating people.

"I don't know if it was the empty building or — just like everything — it needs to cure a bit, but I thought it was really good (at practice)," Trotz said. "So hopefully, that will help both teams."