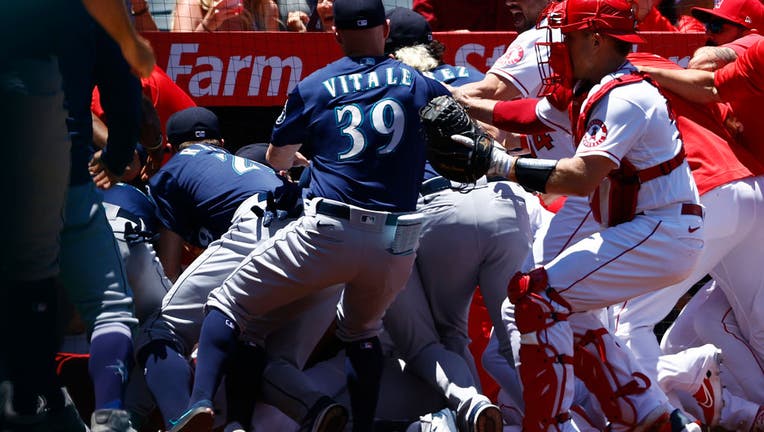 ANAHEIM, CALIFORNIA - JUNE 26: The Seattle Mariners and the Los Angeles Angels clear the benches after Jesse Winker #27 of the Seattle Mariners charged the Angels dugout after being hit by a pitch in the second inning at Angel Stadium of Anaheim on J

Winker's seven games is the most of any player from either team involved in the fracas. Crawford gets five games with Rodríguez two.

"Certainly understand why they will come down," manager Scott Servais said of the suspensions. "It's not something that should be a part of Major League Baseball. … There will be some suspensions coming and it will hurt because of the players involved. They play a lot for us and they do a really good job and any time you lose a key, it hurts."

Angeles manager Phil Nevin received the longest suspension of the dozen players disciplined by MLB. Nevin was given a 10-game suspension for his role in instigating the incident. Andrew Wantz – who threw behind Rodríguez and hit Winker to kickstart the incident – was suspended three games. Fellow relievers Ryan Tepera and Raisel Iglesias were suspended three and two games, respectively.

Third baseman Anthony Rendon, who is out for the year due to a wrist injury, was suspended for five games when he returns to the active roster. He is also prohibited from sitting on the bench for the Angels' next seven games.

The incident had been building before it blew up on Sunday afternoon. Mariners reliever Erik Swanson missed with two pitches up and in to Angels star Mike Trout on Saturday. The Angels had been set to use José Suarez as their starter on Sunday. Instead, they changed course earlier in the morning and installed Wantz as an "opener" for the game. Wantz threw a fastball behind the head of Rodríguez in the first inning, which miffed the Mariners.

Both teams were issued warnings from the umpiring crew after the pitch behind Rodríguez.

Wantz then drilled Winker to lead off the second inning. Winker wasn't visibly enraged until Nevin and Rendon started yelling at him from the Angeles dugout.

"You know, they threw a ball at Julio's head," Winker said of the incident Monday afternoon. "And that was enough to really upset me. I didn't like that at all. He's got such a bright future ahead of him. Yes, we're all out here playing a man's game, I get that. No one should be throwing at Julio Rodríguez's head."

The Trout at-bat that irked the Angels came with two outs in the ninth inning on Saturday. Trout was the tying run in a 5-3 game with David MacKinnon already on base after a walk from Swanson. The Mariners would intentionally walk Trout after the first two pitches from Swanson missed high and tight. That wouldn't appear to be the most rational time to throw at an opponent.

With the Angels putting Wantz out first to throw at the Mariners, it gave them an expendable body to seek their revenge without burning their intended starting pitcher for the day in Suarez. Nevin and the Angels have denied that was their intent, but Winker and the Mariners disagree.

"We didn't throw the ball at Trout. We didn't," Winker said. "We wouldn't hit a guy to bring up Ohtani, who already had a home run. It makes no sense to do that. So I just didn't like the fact they threw at Julio's head and it was all premeditated and they had an opener begin the game to do that. And to me, it was just bulls---."

Winker was asked if the fight was a bad look for baseball.

"It's an unfortunate part because it could have all been stopped with a simple ejection and people just not talking. There's a man with a cast on and a manager talking. That's why this started. If they're not talking, none of that happens, but they decide to run their mouth and I didn't like that. And that it's that simple. I there's nothing else left to say about that.

"They're going to suspend me, they're gonna suspend Crawford and that's MLB's decision. Whatever. It's part of it. But we have depth here. We have a good team, we have guys that are going to fill in and do their job. So I just think it's an opportunity for us to show how good of a team we really are. They're gonna have suspensions too. They're the ones that I think, people are gonna look at somebody, you look at them."

Per Ryan Divish of The Seattle Times, the Mariners will be allowed to stagger their suspensions so they aren't without all three players concurrently. They can also appeal the suspension, which would allow all three players to continue playing until the process is concluded. All three players are in the lineup for Monday night's game against the Baltimore Orioles.

In addition to suspensions, MLB also handed down undisclosed fines over the incident.