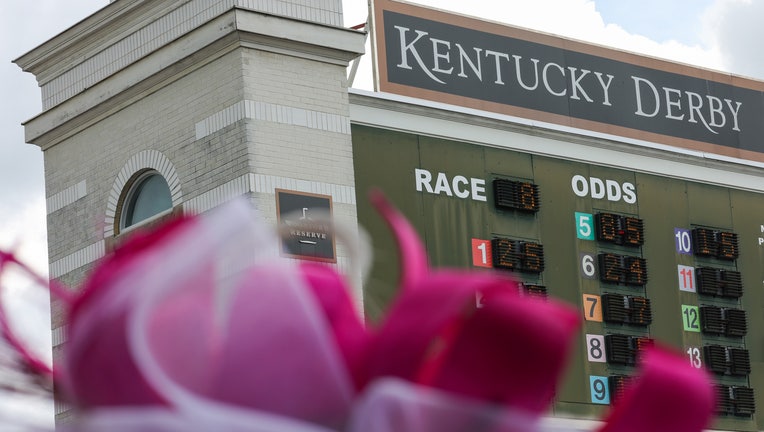 LOUISVILLE, KENTUCKY - MAY 06: ahead of the 148th running of the Kentucky Derby at Churchill Downs on May 06, 2022 in Louisville, Kentucky. (Photo by Carmen Mandato/Getty Images)

LOUISVILLE, Ky. - Anyone anticipating a return to normalcy in the Kentucky Derby got a dose of crazy Saturday when an 80-1 shot came charging up the rail to win at Churchill Downs.

With favorite Epicenter and Zandon engaged in a duel at the front, Rich Strike stole the show with the second-biggest upset in the Derby’s 148-year history.

"I about fell down in the paddock when he hit the wire," winning trainer Eric Reed said. "I about passed out."

Rich Strike wasn’t even in the Derby until Friday when Hall of Fame trainer D. Wayne Lukas scratched Ethereal Road, making room for the chestnut colt who had just two previous wins in his career. 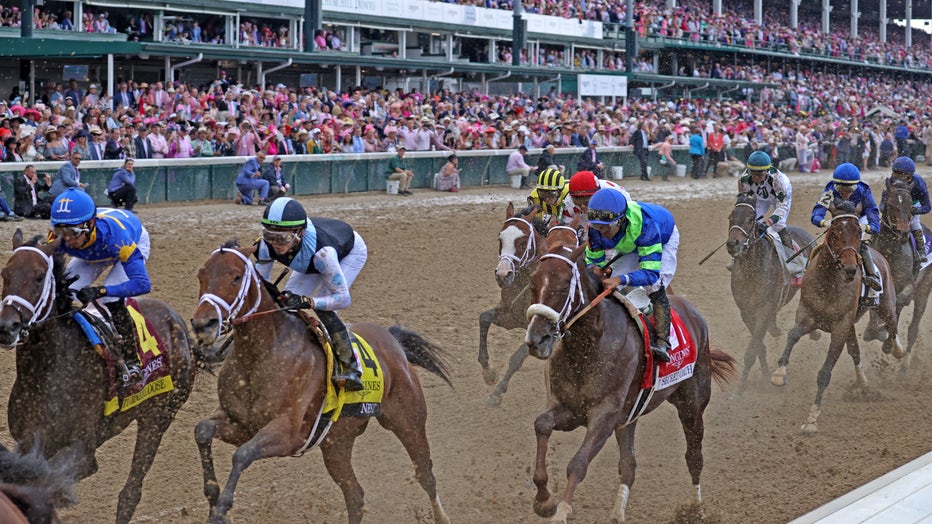 LOUISVILLE, KY - MAY 06: Jockey Luis Saez aboard Secret Oath (1) runs on the inside rail during the Kentucky Oaks on May 6th, 2022 at Churchill Downs in Louisville, Kentucky. (Photo by Brian Spurlock/Icon Sportswire via Getty Images)

"We found out about 30 seconds before the deadline on Friday," owner Rick Dawson said. "It put us in the race and really we always felt if we just got in we’ve got a shot."

Rich Strike ran 1 1/4 miles in 2:02.61. After taking a bite out of his much costlier competition, he playfully chomped on the pony guiding him to the winner’s circle.

"I can’t believe it after Epicenter’s effort," said losing trainer Steve Asmussen, who fell to 0 for 24 in the Derby. "I got beat by the horse that just got in."

Jockey Sonny Leon and Rich Strike had just two horses beat in the early going. Leon eventually guided his mount between horses and to the inside rail. Rich Strike made a deft move around Messier in the stretch and went right back to the rail intent on picking off Epicenter and Zandon.

Both Leon, from Venezuela, and Reed were in their first Derby. Reed endured a tragedy five years ago when he lost nearly two dozen horses in a barn fire at his training center in Lexington.

He briefly considered the fire might be a signal for him to leave the sport.

"People I hadn’t seen, people I haven’t talked to in years, my best friends were there in the morning to pick me up," Reed recalled. "It let me know there’s so much good out there, and then I just decided I wasn’t going to let it take me out."

Leon regularly rides on some of the country’s smallest circuits, where the horse flesh is inexpensive and the purse money modest. But he matched wits with such veteran riders as Joel Rosario, aboard Epicenter, and Mike Smith, aboard Messier.

Leon’s rail ride was reminiscent of jockey Calvin Borel’s stealth move aboard Mine That Bird in 2009. Mine That Bird sprang what was then the Derby’s third-biggest upset, paying $103.20 to win.

Reed had no argument with the bettors ignoring his colt, whose victory surely inspired little guys everywhere.

"Small trainer, small rider, small stable, he should have been 80-1," Reed said. "And so anybody that’s in this business, lightening can strike."

Rich Strike was purchased by Dawson, who races as RED TR-Racing LLC, for $30,000 last fall when the colt was entered in a low-level claiming race by his former owner.

Calumet Farm head Brad Kelley might be ruing that decision now. Calumet Farm has won a record eight Kentucky Derbies, but none since 1968, when Forward Pass was placed first via disqualification.

Rich Strike earned $1.86 million for his first stakes victory. The colt lost to Zandon in the Blue Grass Stakes last month and was beaten by Epicenter in the Louisiana Derby in March.

Churchill Downs returned to full capacity, including former President Donald Trump, on the first Saturday in May for the first time in three years.

But the final result was the more upheaval for America’s greatest horse race.

In 2019, winner Maximum Security was disqualified for interference after 22 minutes and runner-up Country House wore the garland of red roses.

In 2020, an eerie silence enveloped the track when no fans were allowed because of the COVID-19 pandemic and the race was pushed to September.

Last year’s winner, Medina Spirit, was disqualified after nine months, having failed a post-race drug test that led to six-time Derby-winning trainer Bob Baffert being banned from Churchill Downs for two years. The 2021 Derby was back to its usual spot on the calendar with attendance limited to about 52,000.

The bourbon was flowing again Saturday, cigar smoke curled in the air on a cloudy and unusually cool day, and fans strutted in their huge hats, floral-print dresses and seersucker suits.

Then came Rich Strike thundering along the rail and all heck broke loose.

A few days ago, Reed sent Dawson a photo of the colt sprawled in his straw-covered stall with his handlers laying on him, all of them napping. Reed typed, "I think our horse is cool and ready to run."

Dawson responded, "If we can wake him up."

"I feel like the luckiest man alive," Dawson said, grinning.