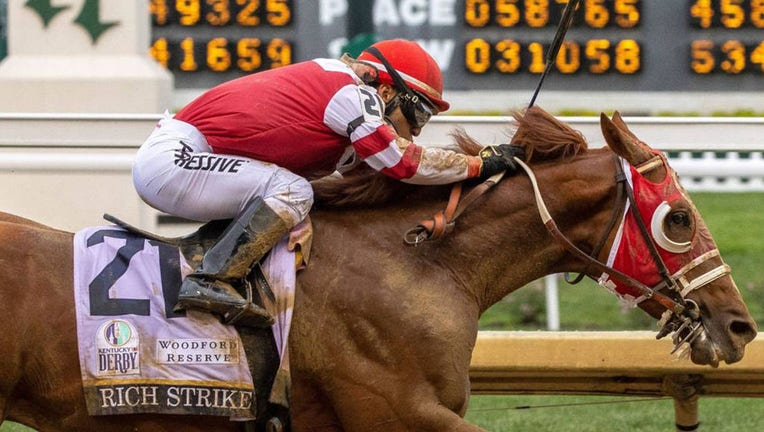 WASHINGTON - Kentucky Derby winner Rich Strike will not run in the Preakness Stakes on May 21.

Rich Strike's owner, Rick Dawson released a statement Thursday that read in part: "Our original plan for Rich Strike was contingent on the KY Derby, should we not run in the Derby, we would point toward the Preakness, should we run in the Derby, subject to the race outcome & the condition of our horse, we would give him more recovery time & rest and run in the Belmont, or another race and stay on course to run with 5 or 6 weeks rest between races."

Rich Strike is pointed toward competing in the Belmont Stakes, the final leg of the Triple Crown, on June 11.  "We are going to stay with our plan of what's best for Ritchie is what's best for our group," Dawson said.

Rich Strike earned $1.86 million for his first stakes victory. The colt lost to Zandon in his most recent start last month and was beat by Epicenter in the John Battaglia Memorial in March.

Jockey Sonny Leon rode 80-1 long shot Rich Strike to a three quarters-length upset victory over 4-1 favorite Epicenter in the Derby last Saturday after his last-minute entry following a scratch and a start from the No. 20 outside post position. The chestnut colt paid $163.60 as the second-biggest underdog to win the Derby behind Donerail in 1913, who returned $184.90.

Rich Strike was purchased by Dawson, who races as RED TR-Racing LLC, for $30,000 last fall when the colt was entered in a low-level claiming race by his former owner.