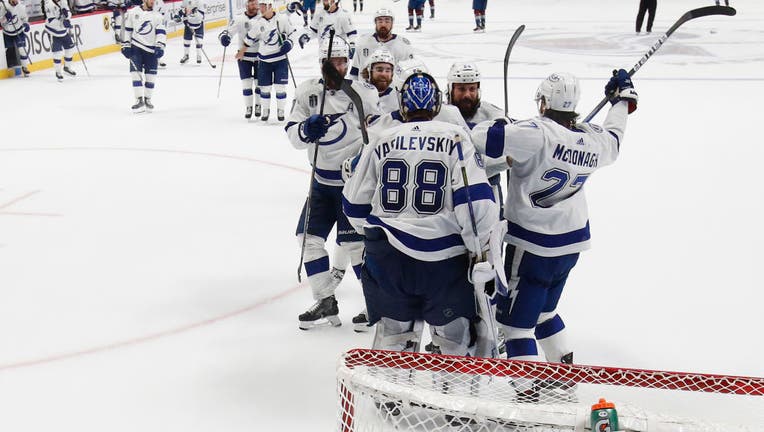 DENVER, COLORADO - JUNE 24: Andrei Vasilevskiy #88 of the Tampa Bay Lightning celebrates with teammates a win over the Colorado Avalanche in Game Five of the 2022 NHL Stanley Cup Final at Ball Arena on June 24, 2022 in Denver, Colorado. (Photo by Bru

DENVER (AP) - The Tampa Bay Lightning spoiled Colorado’s party to stay in the hunt for a third straight Stanley Cup title, beating the Avalanche 3-2 on Friday night in Game 5.

Ondrej Palat scored with 6:22 remaining and Andrei Vasilevskiy stopped 35 shots in front of a raucous crowd hoping to celebrate the Avalanche’s first championship in 21 years. The Cup was all shined up and in the building, too.

It’s heading back to Tampa for Game 6 on Sunday night. The Lightning trail the best-of-seven series 3-2.

Nikita Kucherov and defenseman Jan Rutta also scored for the Lightning. Valeri Nichushkin and Cale Makar had goals for Colorado. Makar’s third-period tally bounced off the skate of Erik Cernak and through the pads of Vasilevskiy to tie it at 2.

It set the stage for Palat, whose shot slipped through the pads of Darcy Kuemper. A brief hush fell over the crowd.

Tampa Bay regrouped after an emotional Game 4 loss at home on a overtime goal from Colorado forward Nazem Kadri. The Lightning felt the Avalanche might have had too many players on the ice on the winner.

A too many players on the ice penalty was called Friday on Colorado with 2:43 remaining. The Lightning went on the power play and made it so that Colorado couldn’t pull Kuemper until around 30 seconds remaining. They weathered the Avalanche’s late barrage.

Just the Lightning showing their championship mettle. They’ve already rallied back from a 3-2 deficit to Toronto in the first round, and climbed out of a 2-0 hole against the New York Rangers in the Eastern Conference finals.

Completing this comeback series win would put them in an entirely different category. Only one team has rallied to capture a Game 7 in the final after trailing 3-1 in a series — the 1942 Toronto Maple Leafs.

This is a gritty Lightning squad that’s showing no signs of slowing down even against a speedy Avalanche team and even after all the contests they’ve logged. Tampa Bay has played in 67 postseason games since the start of the first round in 2020. That’s basically an entire extra season.

Their resolve has impressed Lightning coach Jon Cooper. His team improved to 3-0 this season when facing potential elimination games.

The Avalanche are trying to capture their first title since 2001. The Avalanche fans were out in full force — both inside the building (an upper-level ticket on game day was going for around $1,500) and outside at a nearby watch party.

Colorado knew it wasn’t going to be easy. Makar said leading into the game this was the "toughest one that we’ve had so far."

The Avalanche are 2 for 2 in their visits to the Stanley Cup Final. They also won in 1996, which was their inaugural season in Denver after relocating from Quebec.

Soon after Nichushkin tied it at 1-apiece in the second, Kucherov knocked in a goal off the post. The power-play goal was with Alex Killorn in the box for holding, along with J.T. Compher (holding the stick) and Makar (tripping), making for a 4-on-3 situation.

Rutta zapped some of the energy from the crowd with his first goal of the playoffs. It was on a slapshot from the side that slipped through Kuemper.

It bodes well for the Lightning — teams that score the first goal when staring at elimination in the final are 55-25.

"If we had our choice, we would just write our name all the way around the circle (of the Cup)," Cooper cracked before the game.